The Case of the Wandering Floormats (starring Carmen)

Have you ever noticed how many simple things that you take for granted in life.  I'm not trying to get philosophical here, but referring to the really simple things you find literally laying around your house.  Not even creature comforts like heated blankets or remote controls.  I'm talking low-tech, basic utility things - like floormats.
I never really put much thought into the necessity of these smallest of floor coverings.  But doormats help to wipe the dirt off your shoes so the house stays cleaner.  Bathmats make the bathroom safer when stepping out of the shower.  Even just plain old rugs cushion hard floors and make you more comfortable.  They just lay there peacefully, getting themselves walked on all day long.  Dependable little things.  Or at least I thought there were. 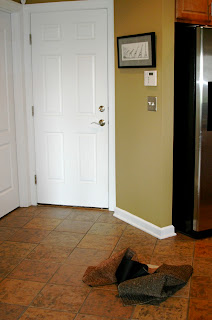 Suddenly and without warning, mats began wandering around my home, seemingly of their own accord.  I'd come in from the garage, and instead of being dutifully there on the floor to clean my shoes, the doormat had slithered away and was instead in a heap in the middle of the floor.  Perhaps it was seeking company, as it was curled up with the mat from the back door.  Were they trying to produce little mattlets??
Even Brutus thought it was strange, as a bathmat would suddenly appear in the front hallway... 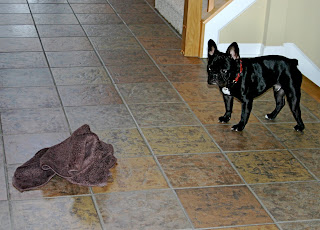 Then one morning I was getting ready for work, Carmen sat innocently on the mat outside the shower watching me. 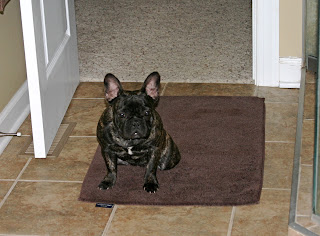 I looked away for a second, then some movement caught my eye 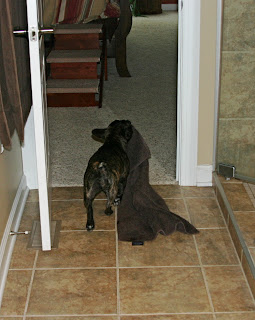 AHA!!  Caught in the act!  Carmen is a mat theif!  All the sudden it made sense.  And it isn't just the bathmats.  Any floor covering that isn't nailed down has become a toy.  Doesn't matter how big they are, Carmen will roll them up and drag them around.
Can you believe it?  This innocent little princess is a bona-fide mat wrangler. 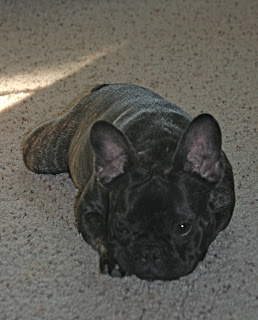 And she does it blatantly now! 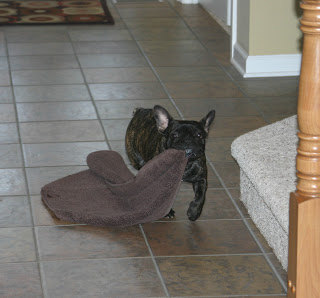 Almost like she's flaunting her treasures right under our noses! 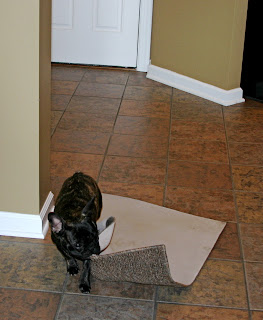 Just dragging them around isn't enough.  Carmen takes the mat to a comfortable place, often piling them up in a heap in the middle of the room.  Then she finds a good corner or tag and gnaws away.  Brutus just watches.  I think that he's enjoying the fact that for once, he's not the one in trouble!
So we've adjusted to life without floormats here.  I miss them, really.  Along with other little things, like being able to take my shoes off and leave them on the floor.  Such is life with a puppy around. 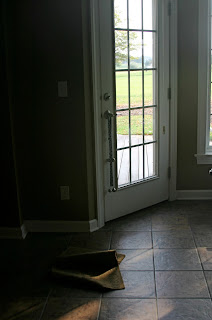 Maybe someday we'll have the luxury of softness under our feet again, but at least for now I've solved the mystery of the wandering floormats!!
Posted by BRUTUS at 8:56 AM

Haha, we are laughing real hard, cuz on cleaning day, when our mats go outside to get a good shaking and airing out, they always end up out in the yard or down the driveway. Has Carmen been to our house?

That is too funny! I was getting worried I thought you maybe had strange things happening at your house like the talking trees that Martha and Bailey have in their forest in Scotland. I am happy you found the source!

Odd...Uncle Puppy likes to tear the hair off rugs...hmmm..puppys are strange creatures!!!

Yes, I had a six year old dog and was happy that nothing was being torn up any more.

Then I found Minnie.

My backyard is a disaster, rugs, shoes...anything that interests her eventually ends up there. I don't know how many times I've rescued my slippers or shoes from the rain...

HAHAHAHAHAHA!!!! Sneaky little devil! Funny thing is that Abby used to steal dog beds and drag them around the house, but I think she gave up when she saw no one cared. Now she just parks herself outside the shower when Mom's showering, as if to make herself a second, larger and lumpier bathmat! Brutus, maybe we should start an Older Sibling Survival Group so us older, less crazy doggies can compare stories about our wild siblings.... ;-)

Umm, we have a mat thief here too, but SHE not only likes to steal them, but she always manages to find the one piece of thread or yarn that, when pulled, unravels a whole row of the mat:( The Momster isn't sure if she prefers a mat thief or the gardener:)

Oh my Carmen you are hysterical. We say anything on the floor or in our territory is ours for the keepin. Thank goodness mom got use to no floor mats! BOL
Benny & Lily

That is great exercise for you, Carmen! I don't move rugs from room to room but I do like to nest in them, which means rearranging them in a nesting fashion and mom is forever tripping on my nest! oops!

Woof! Woof! You gotta to be so strong to drag those floormats around the house. Lots of Golden Woofs, Sugar

haha I love that she doesn't care abotu being caught anymore :)

Carmen likes to help keep things new and exciting at your house!

OMD, that was a riot!
Keep up the good Carmen and what's next??? Go for the sofa cushions!! hehehe
xxoo
Deborah

I knew that little Carmen would be a feisty one!

yep roll them up Carmen you cute patootie....or we'll pee on them. that's right as mumster is alway rolling the mats up or we'll mess them up for her!

Oh-oh!
Carmen... now they know!
I hope my grandma will not read your post... she will know too!
Kisses and hugs
Lorenza

BWAHAHAHAHAHA! Oh, Carmen! You are just TOO much! But I kinda see where you're coming from. I mean, why would they leaves those rugs on the floor if they weren't for YOU to play with? Maybe you could tell your mom that you were just protecting those rugs from The Ninjas. I bet you'd get extra treats!

THAT'S SO AWESOME!!! OMG, I was laughing my little wiggle butt off! That one photo looks like she's so proud of herself, prancing down the hall with her rug in tow!

Carmen, don't you just HAVE to rip the tag off? Yes, it is a must. We will straight up pee wee on any rug. There is literally no carpet and no rugs in our house except in the two guest bedrooms. We are not allowed in there!

We are finally over our little break and I can't believe this post! Avalon does much the same thing, only she actually tears our carpets apart! I have an old coffee table and two chairs covering the areas of two rugs that we love which she's torn apart sniff! So Carmen: keep choosing the mats - not the good stuff heheh!
Hugs xoxoxo
Sammie and ... avalon

Hehehe! Does she shake them and try to kill them too? That could be beneficial if you could teach her to shake the rugs on command ;o) We don't have much in the way of throw rugs here either because I like to tinkle on them sometimes. I've done it since I was a puppy and mom can't get me to stop!!!!! At least they are easy to wash right?
Snuggles,
Twix

Oh the cheek of that little gal. Dragging the carpets around right under your nose. I can't believe it.

heehee! miss carmen, you may be a little lady, but you sure do good work. i used to do the same thingie when i was a puppy, but your mat stealin' skills are way more PRO than mine were!!

pee s -- thanks a ton for the happy birthday wishes! :)