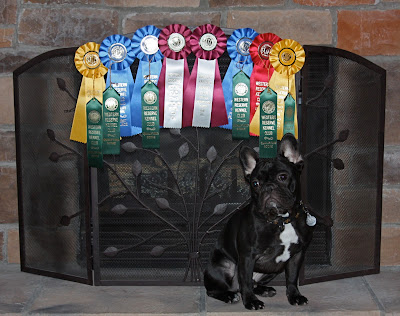 We're back!  What a weekend we had!  I am still grinning ear to ear and can't stop blabbering about it.  Brutus, Carmen and I spent the weekend at the Crown Classic dog show.  Brute was entered in four days of agility, and Carmen got to strut her stuff in the breed ring (thankfully minus the Hot Pants, we don't need them any more!), then tagged along to root for her big brother in agility.  So look out, here comes another brag post, laden with agility speak.... 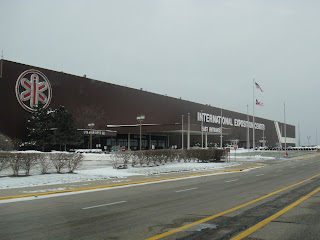 Every December, Cleveland plays host to one of the country's biggest dog shows, the Crown Classic.  Every recognized breed (as well as Canine Partners) were represented in rally, obedience, confirmation, and agility.  It takes the hugeness of the Cleveland International Exposition (IX) Center to get it all under one roof, with well over a thousand dogs on site. 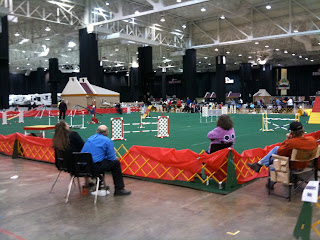 This is the biggest agility trial I've dared to enter, with almost 3,500 runs and international-level competitors in attendance over four days.  The sheer magnitude of the venue was pretty intimidating, and as I walked up to the agility rings to check in and pick up our course maps I wondered what the heck I had been thinking to enter!
This was also the first time Brutus and I would be competing in the "Excellent" level, where all the big boys play.  I had entered 8 classes (Open Standard and Excellent JWW each day), so we really jumped into the deep end!  It didn't help that we had conflicts between the two rings, with both of our classes running simultaneously most days.  Biggify the following to check out the schedule published by the agility show committee - don't think I've ever seen anything so complicated!! 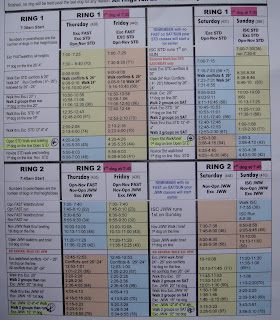 As we prepared for our first run, I had SERIOUS butterflies in my stomach!  The course was difficult, but do-able for me and my little bowling-ball of a teammate.  No tunnels in this course, so looking out at the ring was like gazing into a sea of jumps!  Here's the course map: 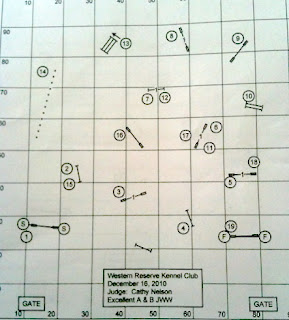 I put Brutus in his start-line stay & got a good lead-out two jumps into the course.  I released him ("okay, JUMP") and Brutus sprung to life - this is always one of my favorite moments!  We negotiated the first nine obstacles without a hitch, Brutus was on his game and turned smoothly each time I asked.  Unfortunately, my brain fell out as we rounded the pinwheel at #10 - I got disoriented just long enough to have to stop Brutus.  Since he was already on the line to the jump (or as we say, engaged the obstacle), this caused the judge to call a refusal - even though Brutus only stopped to wait for my instruction.  Gotta hand it to the little guy, he ended up clearing a double (spread jump) from a standstill, then continued on as if nothing had happened.
We finished the course uneventfully, so it was a great run on the most complicated course we'd ever run in competition.  Unfortunately in Excellent, no faults are allowed, so the refusal resulted in an NQ (non-qualifying score).  Oh well, chalk that up to handler error!!  The bulldog did his job flawlessly though, and he was FAST!  Even though we NQ'd, the run gave me confidence that we belonged in the ring at that level, and was still a success in my eyes.
Luckily that first run also got the jitters out of my system, and soon thereafter we put in a lovely Open Standard course.  Our run there earned us our first OA leg and second place in the 12" class!!  Way to go Team Brutus!!  And apparently it was no fluke, as we started the second day of the trial by being the only Exc A dog to complete the course successfully, winning the class and 4 seconds under the demanding course time to boot!!  Biggify the following photo of the class results to see for yourself!!

As the weekend progressed, we were able to put in more solid runs.  Nailed every set of weaves, and not a bar down all weekend!  Each day I worried that maybe I was asking too much of my partner, but Brutus continued to amaze me by getting better & running with more focus than ever before.  We went 3/3 in our standard runs, earning our OA (Open Agility) title just 3 days after we started it!! 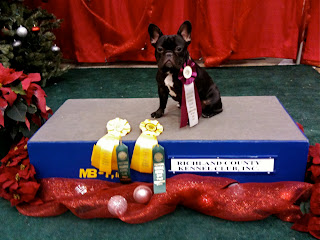 And after my shaky debut in Excellent Jumpers, we negotiated three more tough courses to earn our AXJ (Excellent Agility Jumpers) title in our final run of the trial!!! 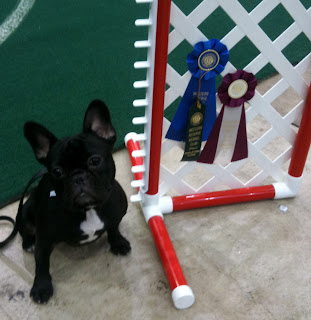 We even got to give Excellent Standard a whirl - something I thought we wouldn't be doing for months.  The course was not easy, and I really didn't expect to Q.  We were just going out there for fun.  Here's the map of what we ran: 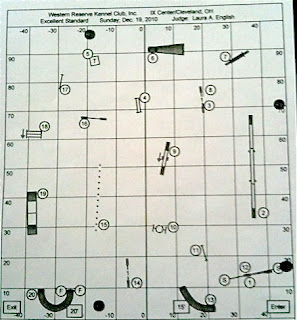 To my delight we made it all the way to obstacle #19 flawlessly!  Brutus was running so well that I let him get a little ahead of me on our approach to the A-frame - since I wasn't there to collect him & remind him to balance (he doesn't like to hit the ascending contact at full speed), he decided to blow past the obstacle instead.  There was a collective "awwwwww" from the crowd - they'd all been rooting for us because the run was so nice!  Oops, NQ (remember, no faults allowed in Exc).  Still, it was a fantastic and fast run, one I wouldn't have thought us capable of if you asked me.  Guess it's time to raise the ante for Team Brutus!!
So in the end, we had 6 qualifying runs with placements - 3 firsts, 1 second, 2 thirds!!!  And our only NQs were as a result of "normal" problems - no zoomies or even a hint thereof!!  If I had come away from the weekend with even 3 qualifying runs I would have been thrilled, so to have twice that and TWO new titles as a result of our effort....  Can you understand why I'm walking on air? 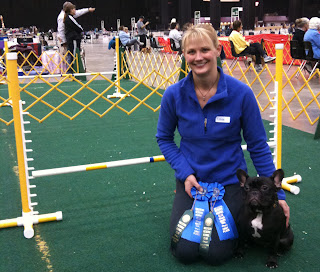 I'm just so proud of Brutus.  He really is coming into his own, and was such a trooper this weekend.  I'll take the results of this trial as a fabulous early Christmas present from my little guy.  Maybe I'll even let Brutus do a little extra decorating on the tree.... 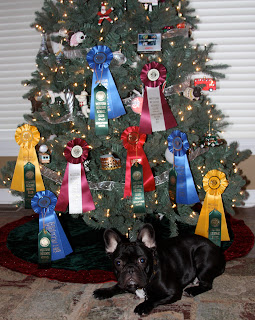 There was a professional videographer at the trial, so in a couple of weeks I'll have some great HD footage of our runs to post.  Brutus and I had the time of our lives, and ended our first full year of trialling on a VERY high note.
In 2011 we'll be embarking on our MACH quest; earning points in Excellent towards our Master Agility Championship (MACH) title.  I try not to burden all our readers with too many performance-based posts, but I just couldn't help but shamelessly sharing this one.  For more information on our progress, check out the new pages I added:

"Brutus Title Tracker" to see how we are progressing in all
venues
"Brutus MACH Quest"  see how MACH points we've gotten
"Carmen Title Tracker"  my little girl will be back in the
performance ring soon!

This way I can keep my fellow agility enthusiasts up-to-date on our progress without overloading the rest of you!!  But for now, thanks to everyone who has been a part of our journey, I'm so thankful to be able to share it with our fans!! 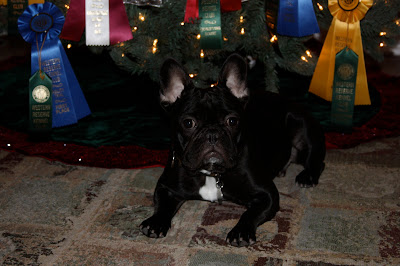 We'll be back soon with more posts from our more more "normal" daily lives.  Lots going on to get ready for the holiday weekend, so stay tuned!!
Posted by BRUTUS at 12:21 PM

Brutus, we applaud you! Very well done this weekend!!! :)

We've been following your accomplishments on Facebook, so all we have to add (beyond additional congratulations) is HOW COOL is that Christmas tree?!? Dude, you totally have the best ornaments on the tree! Congratulations to Team Hrnchar!

Could you please come train my dogs?

Congratulations on your many wins! Good for both of you!!!

HOORAY for Team Brutus! What an amazing little dog you have, it sounds like a great adventure!

Oh my word!! You are both true champions. Brutus we are so proud of you. You better tell your Paw to start building the trophy case. Look at all those ribbons! And competing with the big guys. Good job Brutus!
Benny & Lily

yeahhhhh brutus... Congrats to you all!! Merry Christmas, and be safe

I would like to wish you and Carman and Mason and your mom and dad... a very much MERRY CHRISTMAS all filled with Fun and Furends and Food.

PeeS... Love the Ribbon Tree... I'm thinkin it can stay up ALL YEAR!

Congratulations, Brutus! We are so very proud of you and your mom!

That is awesome news! You both look sooooo proud. You are an amazing little man Brutus!

I'll admit that agility speak kind of confused me, but the display of ribbons was crystal clear. Amazing! What a fantastic weekend.

I had no doubt and Team Frenchie would do well. They are so loved and trained! I would suck at trying to remember the jumps and such. I get turned around so easy. I can't wait to see the video, I love watching the little man in action! Go smush faces!

Wow! Don't worry about boring us, you make it sound very exciting! Congrats on the wins!