Hey everyone!  It's Brutus!!  Can you believe it?  So little posting here lately, I was starting to forget how to do it.  Mom has a snow day today (Snowmageddon #4 in Ohio), so we finally have a chance to catch you up on what we've been doing lately.
Mom is always on the lookout for tasty new treats for us to try.  You see, we Frenchies have a reputation for eating ANYTHING (underwear, earplugs, christmas tree lights, in no particular order), but actually have a very discriminating palate.  It takes something really special to get us genuinely excited, and we get bored quickly with even the most delectable treats.  So today I, Chef Brutus, will be sharing the newest - and dare I say BEST EVER - recipe that a friend recently sent to us. 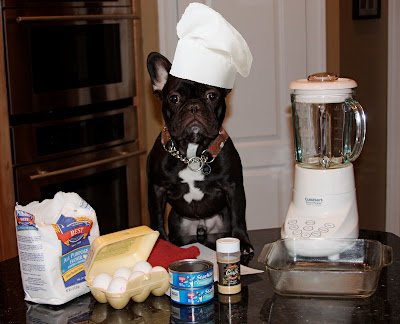 It's called TUNA FUDGE!   I'm drooling just thinking about it.  Better get on with things before the keyboard gets so full of slobber that my paws can't find the keys...  You have to make it through the post (just like I had to make it through the production of the post!) to see the actual recipe.  Hehehehe.
First, gather all the ingredients.  Oh, and loose the ridiculous chef hat - it only gets in the way.
Next, combine everything into that terrible machine that mom calls a "blender".  Press the button that says "puree".
It will take a while to smooth everything out.  While you are waiting, it's never too early for a taste test (just keep your tongue OUT of the blender itself!).
OK, now that it's all blended, have your human pour the goo into a greased baking dish (it's just not possible to do yourself, I tried). 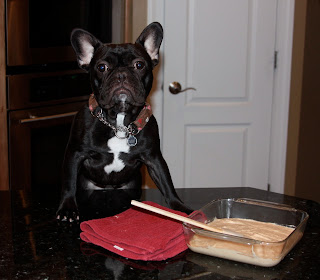 Never hurts to taste it again, just to be on the safe side. 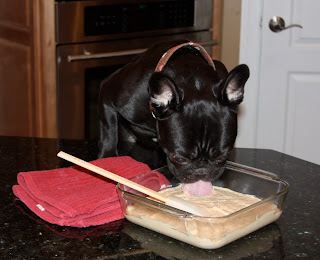 Now the waiting begins.  I had mom turn on the oven, and once it heated up she put the pan inside to cook. 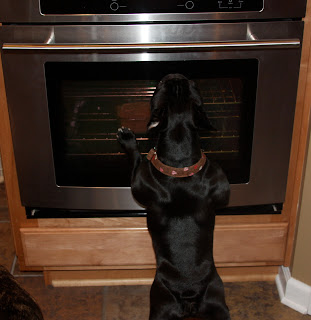 In the mean time, feel free to lick the bowl.  And the blender.  And the measuring cups. And the spatula... 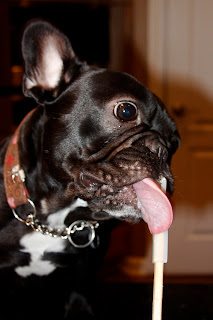 As if the lovely aroma of the baking fudge wasn't enough to torture me, I had to defend my culinary creation from my pushy little sister.
After what seems like an eternity (actually it's only 20 minutes, but in dog time that's like 4 hours), get your human to take the fudge out of the oven & let it cool.  I begged mom for another taste test here, but she said it was still too hot.
The fudge has a kind of play-dough-like consistency.  When it's cool, it can be cut into squares for easy handling (although I'd be perfectly happy to eat it right out of the pan). 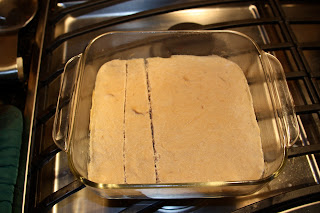 At long last; my tuna fudge is ready!  You can freeze some, otherwise it'll keep in the fridge for about a week - assuming you can keep your paws off it!! 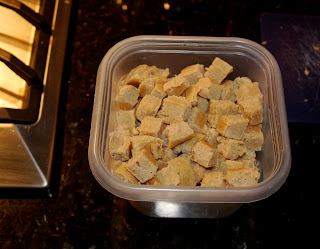 I tell ya, I'll do anything for tuna fudge.  It is the most amazing thing I've ever tasted!  Are you drooling yet??  OK, no more teasing, here's the recipe: 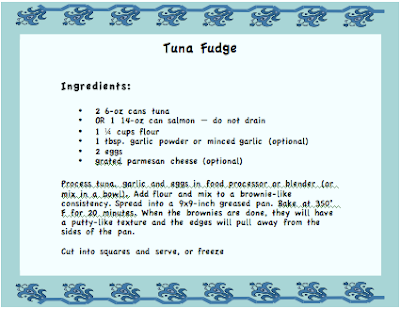 This is Chef Brutus singing off for today.  Gee, I wonder if Food TV  is looking for a new host....
Hope you can get your human to help you make some soon.  Many thanks to our friend Katie (whose MinPin Mitzi reluctantly allowed her to share the recipe), I do believe that tuna fudge will result in a definite improvement in our agility and obedience performances!   Gotta go - the tuna calls!!
Later Taters!
Brutus
Posted by BRUTUS at 10:42 AM

Brutus,
That looked divine! You make the most excellent TV chef!!

While I can imagine it smelled good to YOU...ewwww!

I'll have to make some for the girls this weekend!

You are a fantastico Chef, Brutus! Those treats look sooo yummy. And I can't help but notice that you have a magnificently black, shiny, healthy coat!!!

BOL! You'd make a GREAT TV chef! I'm going to have to make these behind mom's back... she said she can't imagine them smelling all that great... but I know they must!
-Corbin

I thought WE were not allowed to have garlic though.

Dude, that looks so super amazing!

Mom is copying down the recipe for me right now.

Bwutus
That is a most amazingly good sounding wecipe!Just like all the best chefs , you taste evewything as you go along to make suwe it's going to be pawfect.
Did you know that Top chef's Tom Colicchio lives in the same building wif me? and his doggie comes to my wun. Hew Name is Pipew..next time I see hew, I'll ask if they need a new host..You'd be pawfect
smoochie kisses
ASTA

Oh, sorry. That was me just wiping the drool off my keyboard.

Holy moley, does that ever look DEE-lish! I have GOT to gets my mom to make me some of that THIS WEEKEND!

I betcha the Food Network will be calling you any minute now. You're way cuter than any of the humans they have on there. And you look better in a hat than they do, too.

Great job Brutus! You are a natural born chef! :)

The photos in this post are absolutely adorable!!! The one of you licking the top of the blender is just pure joy. I can just hear you saying "mmmmmmmmm!"

We'll definitely have to give these a try!

Looks so yummy...and you did a great job baking!!

I have never seen anyone look more handsome in a chef's hat!!!

Oh yes, Brutus, we so need to taste this fudge. We love tuna anything. OK, now to paw at the Momster to help us out here. Thanks for a great and easy recipe.

Hey dude! That looks FABULOUS!!!! I totally want some but mom says it would make her all gaggy if she made it. Maybe I'll go talk to Holden.....he could totally do this.

Thanks for the recipe buddy!

That looks so yummy, Brutus! Thank goodness that you get to tastetest everything before it goes into the oven. You always have to be sure, right?!

Mmmmmmm! Brutus, this looks fantastic! I'm going to try this out asap! :)

This is so cute! Brutus is such a good sport...and a good cook too! We will have to try this recipe for sure.

Thanks for such a great recipe!

Brutus!
You are the most handsome Chef I have ever seen!
And those treats... OMD! Look yummilicious!
Thanks for sharing the recipe!
Now... let me go and tell my mom about it!
Happy weekend!
Kisses and hugs
Lorenza

Oh Brutus, this is such a cute post. Your photos with the chef hat on are too much!! Love you! Now, we've been told that garlic can be toxic to dogs, so think you better leave the garlic out of your recipe. Okay? Have a good weekend & let us know when your prizes arrive.
Smooches from pooches,
BabyRocketDog and Hootie
(using mommy's blog)

Oh Brutus, this should NO doubt help with agilites!! ha! You did a great job hosting and I love the part bout keeping your tongue out of the blender!! For sure!! I will see if I can make some this week they sound scrumptious!!

We made Tuna Fudge a few days ago using rice flour and Gilda *LOVES* them! They will be our Agility treats for awhile. Thanks Brutus!!

I read that dogs are not suppose to have garlic. So just don't put it in the recipe(optional anyways). you look great Brutus!!! Job well done:)