A Couple of Caricatures

We were at an agility trial last weekend (imagine that).  As is often the case, there were vendors set up to sell any kind of imaginable dog item, from chew toys to embroidered towels.  Usually I try to keep my distance, but once particular vendor caught my attention; a man doing caricature sketches!  You can bet it didn't take me long to get in line to have Brutus & Carmen done.
Let's face it, my dogs are sort of caricatures in of themselves, but what fun to have them drawn freehand.  Each sketch took the artist about 20 minutes, and took into account not only the dogs' physical characteristics, but also their personality as he worked.  Brutus, of course, was way over-stimulated by all the goings-on around him.  Drawing really big ears was a given, but the artist also really over-exaggerated Brute's eyes to express his, er..., "intensity". 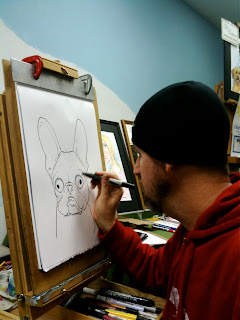 Here's what he came up with.  A little over-the-top, but I guess that's what a caricature is all about! 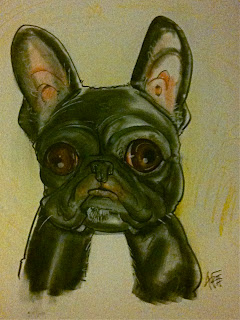 Next it was Carmen's turn.  She just soaked up the attention, sitting and posing like the true Diva we all know her to be! 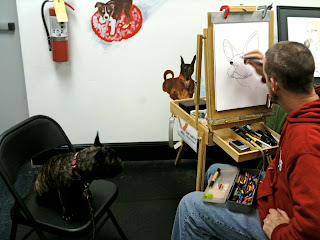 It's funny how different the two drawings turned out to be.  Paul says Carmen's looks kind of like a dolphin with ears, but I think that's because she has kind of a permanent smile just like one those friendly sea mammals!  He definitely got her eyes right, and it does convey the Carmen's more laid-back personality. 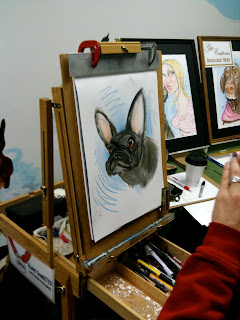 Not quite sure what I'll end up doing with the caricatures, but they will probably end up in frames in my dog trophy room (aka home office).  No matter what, a fun thing to have done.
The drawings are very reasonable ($20 each) and the artist (John LaFree) can also do them from photos you email him.  In case anyone wants to check out his work, go to www.caninecaricatures.com.  BTW, John has no idea I'm posting about this, I just thought it was a cool thing to share with our friends!  Plus he donates $1 to the SPCA for each drawing he does, so it benefits a good case as well. 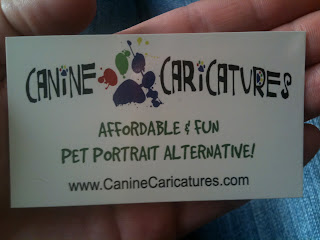 Caricatures are always fun, these two turned out quite nicely. We know they will be a great addition to the Frenchie wall.

I think they're cute! They are what they are supposed to be, over the top!

Those look cool! What a fun thing to do.

What fun... I liked Brutus' pouting lip in his picture.

Fun Stuff! Those are hilarious btw. Carmen was def. trying to show Brutus up.

I've always loved caricatures!
Our guide dog school offers them at Walk-A-Thon time, but the line is always so long...

Yours are so cute; they'll look great up on the wall!

How cool they are! What a little poser you are, Carmen! You're too funny!

I love good caricatures! I think they're both cute, but Brutus' made me grin like crazy!

The caricatures of Brutus and Carmen are pawesome!
He sure is an artist... with a very good heart!
Thanks for sharing them!
Kisses and hugs
Lorenza

Oh my Gawd, we love it. You know mom will get our done sooner or later.
Benny & Lily

what great caricatures!! I always knew that you both were real characters!! BOL They will look good hanging up!!

Wow, those are quite superb. What fun! And your two were so well behaved too.
Sending lotsaluv
MAXMOM IN SOUTH AFRICA

Heehee! Those are SO cute! Like you said, he sure did come up with a good way to draw their different pawsonalities. I don't think Carmen's looks like a dolphin at all. More like that Flying Nun lady.

So adorable! I just love 'em!

PS. There's an award for you on our blog. Swing on by and pick it up! Life with LuLu

Woof! Woof! How COOL!!! We love it n thanks for sharing will check out his site. WOW n the price is sure super affordable. Lots of Golden Woofs, Sugar