After an evening of playing with Teddy & all his pack, we turned for the night with mom warning us that it was going to be an early morning.  Sure enough at 5AM the alarm went off & we were on the move.
With four Frenchies safely piled in the car, Hope pointed the car (while mom helped navigate) towards Libertyville, IL.  After about 40 minutes, we arrived at the most enormous sports complex my big eyes have ever beheld!  Checked on the website, this place is 170,000 sq feet!!  Those little dots outside are cars (and BTW, Google Earth is amazing...) 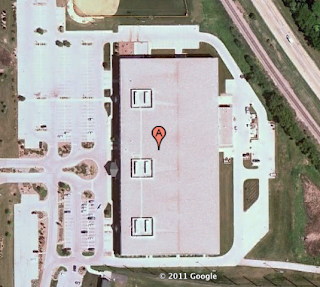 Anyways, don't know if you remember from last summer - but indoor soccer arenas double as agility rings during the off-season.  Yep, we were at an agility trial! 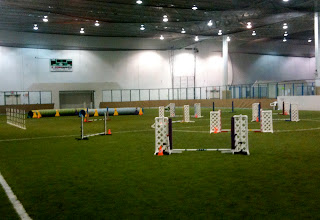 Most of you have probably never been to any kind of dog trial/show, so here's the funny thing.  Early on the first morning a small city starts to emerge, with each club setting up camp & saving space for everyone in their group.  By the time the weekend is in full swing, it looks like a refugee camp, with dog crates, exercise pens, lawn chairs, coolers - often all coordinated in each training club's colors.  Quite a thing to behold!  Mom staked claim to a couple of square feet with the "All Fours Agility" group (where Hope trains with Dax & Teddy).
I'll try to spare you all the details mom would surely include if she were writing this post, you know how she can go on endlessly about this agility stuff!  I must mention that Frenchies were unusually well represented at this trial - there were 3 of us entered and another two (Teddy & Carmen) there who were present, in training but not old enough to compete.
You already know this strapping, athletic (ahem):
And here's our friend Dax in action: 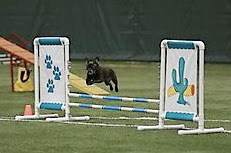 We also met this handsome boy, Otto.  He's just starting in agility, and watching his runs left us with no doubt that he loves it! 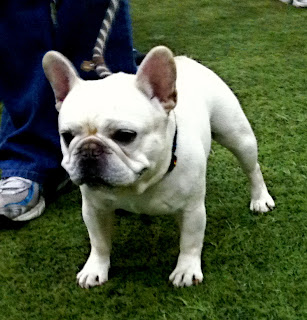 Dax & I kept our respective moms pretty busy, but they did have some time to take the young 'ons over the practice jump.  Here's Hope & Teddy practicing their startline stay. 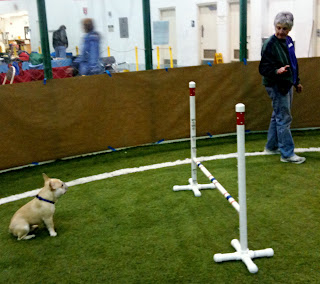 Had to slip in another action shot of yours truly (it is my blog after all), look at that intensity! 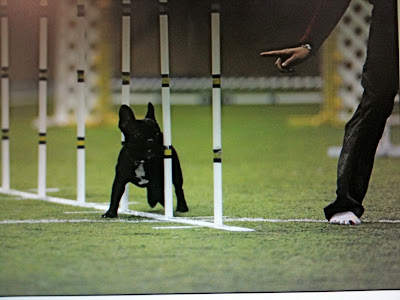 Oh yeah, and here's a video of Team Brutus in action.  Two runs here for those of you with a broadband connection, the first is the Standard course, and the other is Jumpers With Weaves:
We had a great time over the 3 days of the trial, putting in 6 solid runs and making lots of new friends.  We now compete at the top level of AKC agility (Excellent B), where runs have to be perfect to qualify.  No mistakes on course, no bars down, no going over the allowed time.  We managed to do that twice, and if it weren't for a couple of bone-headed maneuvers on mom's part (ok, and a couple on my behalf as well), we would have had 5 Qs over the course of the weekend - including the much sought-after Double Q (qualifying with both runs in the same day, which gets you special points).  All in all mom says she was super-proud of what we did there!
We originally planned to wrap up posting about Chicago in two parts, but there's still more fun stuff to tell you about.  The blog has kind of been withering on the vine lately, so hopefully our remaining followers will be entertained enough to tune in for one last (agility-free) installment!!
Later taters-
Brutus
Posted by BRUTUS at 8:43 AM

Woof! Woof! Oh My ... you were in town. I used to partake in agility events ... I am retired. I could have have watch your weekend agility event. Can't wait to read where you guys went ... hope you had an enjoyable time. Lots of Golden Woofs, Sugar

Congratulations guys!
You work so hard with your pups...I am sure you guys did wonderfully in the overall ranking. That sure is a HUGE facility there. Stunning pictures of pooches having lotsafun - afterall that's the most important, isn't it. Thanks for sharing.
Sending lotsaluv and congrats
MAXMOM IN SOUTH AFRICA

it is always such a pleasure to see you in action! thanks for sharing
PS, aren't you gorgeous on this last picture?

We'll take any Brutus and Carmen that we can get. Add in your two new furiends and it is icing on the cake. Congrats on your weekend. We, uh, tried out some agility equipment at the local dog park and it was a sight to behold!

Oh my goodness we are so proud of you guys. Hey that kid looks like me, anyway..we love seeing you do your agility.Those sticks sure must be hard to weave in and out. Whhhooaa!!! team Brutus
Benny & Lily

OH it was so fun watching you do the course, Brutus. Frenchies doing Agility really fascinates me. That 1st run was very good! You were slow & steady which is a good thing. Many fast dogs do badly because they're just going way too fast! Congratulations of your Qs!

We just love your one paw handstand, Brutus! You are such a master at agility!

I've watched many an agility trial, and I've never seen anyone attempt a handstand. Great job! Your focus and desire to get a perfect score shine through in the video.