It's wonderful to know that our core friends are still out there!  Heartwarming to see your comments again, I have missed blogging!  It's been so long that Blogger has a whole new interface that I have to figure out, please bear with me while I play around with the template & arrangement on the blog!

Myself, I've been busy at work, drilling away in the trenches more than I have in several years.  We did get a nice Earlventure at the beginning of summer, traveling to Colorado & Utah (Frenchies in tow, of course!).  Also had a wonderful getaway to Paris late in August (Frenchies stayed home). 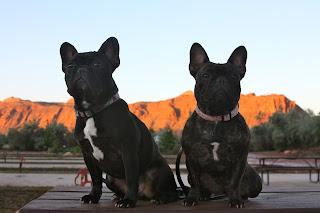 Mason is doing well, 13 1/2 years old and still going strong.  A little slow to get up in the mornings sometimes, but for an old guy he's pretty spry.  He never lets me forget when it's time for dinner, and he's still good to give the Frenchies a stren talking to when they need it! 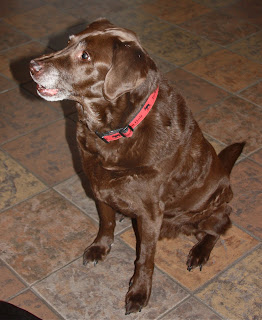 Brutus turned 3 this summer, hard to believe!  He's going strong in the agility ring, meeting and exceeding every goal I've set for him this year.  He is currently the #3 French Bulldog in AKC agility for 2011, and closing in fast on the #2 dog (who we hope to overtake by years' end).  We have been invited (and are going!) to Orlando this December for the AKC Agility Invitational - a chance to represent our breed along with the best agility dogs in the country! Last - and certainly not least - is little miss Carmen, my princess.  At less than 20 months old, she is already making waves in the agility world.  She started trialling this July, and in less than 3 months is running in the top level (Excellent), having earned her first 4 titles.  Carmen amazes me with her heart, and astounds pretty much everyone who sees her run - apparently she never got the memo that she was bred to be a lap dog.  She runs faster, jumps higher, and has more gusto out there than Brutus ever dreamed of!  He is officially on alert, as I fear (truly in a bittersweet sort of way) that Carmen will overshadow him in no time - she truly is one of a kind. 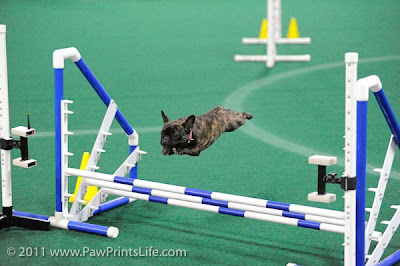 So there you have it, in the smallest nutshell which it can fit.  I hope to post a time or two each week, and will do my very best to catch up on friends' blogs when time allows.  A lot of what gets said here will be agility related, but I'll be sure to add some other fun stuff as the material presents itself (and with Team Frenchie, you know that's inevitable!). See you soon! 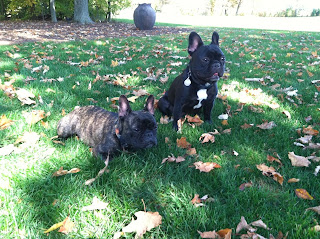 Thanks for the update and congrats on the invite to Orlando! I'm sure Brutus will do the breed proud! It's also nice to see a pic of Mason! I've been following your agility adventures on Facebook, but poor Mason obviously hasn't been a part of that, so he's been missed! You were in Paris just a short time ahead of me - we were there for five days in early September (I still need to update my bloggy with pictures). Thanks for the update!

We missed you! Come by my blog before midnight - we're having a giveaway for dogs!!

Mason looks wonderful - 13 1/2 - that's just wonderful. Congrats to both Brutus and Carmen - awesome work from them AND you.

wow, Hugs and kisses for me, and Congratulations, your really deserve it!

Holy Molies, crap!! Brutus could we please have your pawtograph!!!
Benny & Lily

We all would like to know how you could go to France and not take French dogs? (Brutus and Carmen paid for this question!)

Bobo would also like you to know that he knew his best girlfriend Carmen was a STAR the first time he laid eyes on her. (the eyes, the body, the color - Ok Bobo enough!!!)

I'm glad to hear that everyone is doing well! Congrats on the invitation to Orlando!

Congrats to Brutus! That's just awesome! We love that picture of Carmen flying through the air!
You and I sound too much alike, Mason! Heaven forbid we should miss a meal!

Glad to hear all is well with all of you! And WELCOME BACK! :D

Waggin at ya,
Roo

Oh, gosh, we've missed you all something awful and we're SO happy you're back in Blogville! Sounds like you all have had super exciting adventures and you've been going, going, going. I just luvs that picture in your header of Brutus and Carmen going over the jump together. They both look SO happy!

Glad to hear that everyone is doing well!! Just love the pictures of Brutus and Carmen doing agility :)

First off, you don't have to use the new blogger editor. I don't. I am clinging to the old one for as long as they will allow it.

Here you are!! So glad you are back. The summer seemed to have taken a toll on a mess of us bloggers...BUT, we're back!!! Our mama got to meet her SIL's Frenchies(in PA) in August and she fell in love with them. They were crazy pups and just sooo sweet. Congrats on the placing in agility. You both rock!!!
Smooches from pooches,
BabyRD & HOotie

Thank for sharing this wonderful update with us. We hope that things have been going well and Brutus had a wonderful third birthday. Have a wonderful rest of your weekend.
World of Animals