As you know, we had to say goodbye to Mason (our 13.5-year-old Chocolate Labrador) just before Thanksgiving.  We knew he was in twilight of his life, but that didn't make his loss any easier.  Although we had planned to remain a "2-dog household", our family just wasn't the same without a "big dog".

Paul quickly realized that the only way to help heal the hole in his heart left by Mason was to get another Lab.  Thanks to my connections in the competitive dog world, our search for a puppy was short and simple.  In a series of almost eerie coincidences, we found ourselves driving to visit a breeder within a day of making the first inquiry. We really didn't plan to be bringing home a puppy until at least after the holidays, but fate apparently had other ideas.

There was an 8-week old litter of labs, two yellow males still waiting to meet their new pawrents.  We ended up going to see them the same night we called, and within 36 hours of beginning our search came home with our little yellow man.  Meet Trevor (officially known as Rockhaven's Twist of Fate): 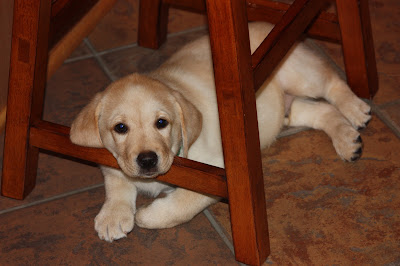 To say the Frenchies were a little surprised with the new addition is an understatement.  What was this funny-looking, yellow-furred thing with a pointy nose & long tail that was invading their home?  Still, introductions went well, and by the time we went to bed that night Trevor already felt like part of the pack.


As things tend to go around here, there hasn't been a dull moment since.  Trevor had to hit the ground running, and luckily he was up to the challenge.  As soon as he kind of got the hang of things at home, we hit the road in Big Earl (our motorcoach) to travel to Florida for a national agility championship that Brutus had qualified for.  Trevor was a great little traveler, and already has a couple thousand miles under his belt - most of it traversed while he slept!

We arrived back home just in time for all the holiday hubbub to be in full swing.  A 10-week old puppy and christmas decorations?  Ugh.

But all things considered we made it through Christmas with no major tragedies, Trevor taking it all in stride.

He was a hit with our holiday guests both big & small, including some out-of-town company who came to visit with their two dogs (a lab and a Frenchie).


Now 15 weeks old, Trevor has already outgrown his first crate (although he's in denial of that and still likes to crawl into the Frenchies' crates) and weighs 30 pounds.


One look at those polar bear-sized paws will tell you how big of a dog Trevor will inevitably be.  I think he'll eat us out of house & home in no time if he keeps up the current growth rate.


Trevor appears to be the most astoundingly "normal" dog we've owned.  He is already about 85% housebroken already (by comparison, it took Carmen until almost 6 months, Brutus until over a year to get to that point!).  Trev loves to go outside - weather conditions (rain, snow, cold) do nothing to dilute his enthusiasm.

Our vet gave him two thumbs way up for both confirmation at temperament.  Already he's the star of his puppy class, walking nicely on a leash and learning basic obedience commands like the working dog he was bred to be.  Last week Trevor went to work with Paul for the first time, and got a A+ for his first day on the job as a shop dog.  I tell you, nothing fazes the yellow man.


Carmen, on the other hand, LOVES Trevor - she is part mother, part rough-and-tumble playmate.  Although he already seriously outweighs Carmen (who weighs a little over 20 lbs), she is no doubt the alpha dog around here and has no trouble putting Trevor in line.


Carmen can effortlessly tackle and pin Trevor, and spends most of her waking hours wrestling, playing with and chasing her "little big brother" (while Brutus sits on the sofa and rolls his eyes).   They are snuggle buddies too - a nap is always better with company, after all! 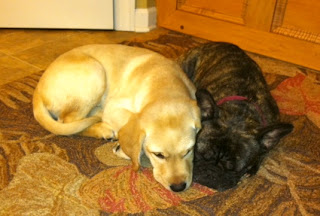 We have had a really mild winter so far, and the three dogs love to go for pack walks together.  I look like the crazy dog lady for sure, two Frenchies in one hand and a small yellow moose in the other.  Funny thing is that Trevor is the easiest to manage of them all! 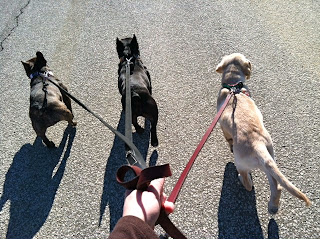 Trevor is primarily Paul's dog, so no plans for him to follow in the Frenchies' footsteps in the agility ring - in fact one of his main jobs is to keep Paul company when I'm away with Team Frenchie.   That's all good with Trevor, he loves being a "daddy's boy"! 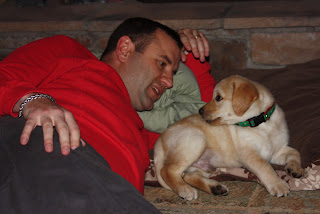 I'm planning on doing some obedience with Trevor, and hope to get at least a few basic titles in that type competition as he seems well-suited to it.  Beyond that Paul hopes to find some fun things to do together to keep Trevor busy, like dock-diving or some field training.  I think no matter what we ask of him, Trevor will always be happy to oblige (especially if you have something to feed him!).


So we've come full circle.  Lost the founding member of our pack, but seem to have found an even more unflappable dog to fill Mason's shoes - although I think her already out grew them.  I will probably revamp the blog (again), as Trevor will most certainly find himself being posting material as often as anyone else.  I'm starting another blog (www.teamfrenchie.blogspot.com), so that I can keep our Team Frenchie/competition stuff from clogging up this page.  So stay tuned, with a puppy around, there's bound to be no shortage of posts.  And no shortage of naps either!

Welcome Trevor! That picture of him in the toy box is the best! He and Carmen look so cute sleeping together. Have fun with your new family member.

Welcome to Trevor. He seems to be a nice little guy.

Oh, no! Somehow I missed that Mason went to the Bridge. Gosh, I'm ever so sorry.

But golly, is Trevor CUTE! And it sure looks like he's fitting in just fine with the Frenchie Pack. I luved all the pictures, especially of him and Carmen snuggling. Just too, too sweet. I can hardly wait to see what big adventures those three can come up with!

What a cutie! Trevor looks like he has been part of your pack forever :D

Welcome to the pack Trevor!! You're a cutie!!

Welcome, Trevor - you are quite the cutie!!! You found yourself a great family. We can't wait for more exciting adventures with you and the Frenchies.

Congratulations on your new family member! He's very handsome! Can't wait to hear all about him!

Welcome Trevor!! Nice that he gets along well with the Frenchies, though labs usually have a good nature like that, and nice that the Frenchies like/tolerate him! Can't wait to read and see more of Trevor's adventures in Frenchie land!

Um, wow, congratulations on having the cutest puppy ever.

(Not that I don't think Carmen and Brutus are adorable.. but Labs puppies just get me!)

CONGRATS! Can't wait to hear more from you and your (even bigger) family!

Welcome, Trevor! You sure are a cutie!

Oh my word!!! We had no idea about Mason. So sorry, but welcome Trevor. What a beautiful addition
Benny & Lily

Welcome Trevor!! We can't wait to see what adventures are in store for you!!

Welcome Trevor!
I am sure you are making the life of your family very interesting!
You are adorable!
Kisses and hugs
Lorenza

Hi its me Sasha, do you remember me?? I bet you remember my Mom, does Bucky Badger ring a bell. I am back and you have had some changes. We were very sorry to read about your loss, but it looks like everything is going great now. I have missed you.

Congratulations! He's adorable! I know the feeling. After we lost Lilac, our new puppy was soon ready to come home. He's fourteen weeks and surprisingly, our Christmas tree survived until after Christmas. He has certainly brought new energy to our house and I'll bet Trevor has to yours, too!

Wonderful, handsome and soon to be very big boy. Trevor seems like a great dog and I am sure he will always be by daddy's side.

Helloooooo Trevor!! What a wonderful little fellow you are. Bringing new life into the family for your daddy and mommmy & the frenchies was just what you were born for!!! How'd the frenchies do in their FL competition? We'll look for their new blog.
Smooches from pooches,
BabyRD & Hootie

Hey there, I've missed you guys! For some reason your blog posts aren't showing up in my dashboard- i"ll have to update your url!
So sorry to hear about Mason. I grew up with a chocolate lab so they always hold a close place in my heart. trevor is beautiful :)

I made some postcards to support ohio's HB 14 which will hopefully make the viscous dog law much more realistic. If you want me to mail you some (free of course) so you can help support the bill, please let me know! Im trying to distribute all 100. You can see them here: http://poochesforpeace.blogspot.com/2012/01/hb-14-postcard-update.html

They are pre addressed to the governor, with a message of support already on them, and there is room for a return address and writing if you want to add anything, or just sign your name! So if you want some just let me know on my blog post and i'll email you to get your info and all that!

Welcome Trevor! You sure are a cutie :)
I can't wait to hear lots more about you,

What an awesome addition to your family. Looks like Trevor is fitting right in.

Lots of licks,
Swisher and Oakley

A belated welcome to little Trevor!

Welcome Trevor! One of my fosters got renamed Trevor by his new family and we love that name. Some how distinguished and goofy at the same time! He is sooooo handsome and it is freakin adorable how he and Carmen snuggle together! Glad he is fitting in with you shorties even though he won't be short for long!
Moose

We are so happy to meet you, Trevor. We know that you will love your forever home and the new family. Thanks for sharing the cute photos. Have a wonderful day.
World of Animals