Brutus shows his softer side

Brutus is great with kids.  This is a good thing, as he is a magnet for them!  He got comfortable with my nephews & nieces early on, so it doesn't phase him when little people no taller than he is (standing on his hind legs I mean) run up & hug him.  Brutus might forget his manners on a regular basis when an adult comes over, but with kids it's another story - he lives up to every last detail of his Canine Good Citizen (CGC) recognition!
This was evident this weekend at Paul's softball game.  BTW, the team is 6-2 on the season now, not bad!!  We blatantly ignore the "no pets" sign, since Brutus is an important part of the team (what good would Georgia college football we without Uga, after all?).  There are usually kids around, and they always gather around The Brute.  One of the other players' little girl was smitten with him, and decided to show her affection by bringing Brutus flowers.  Of course, his first reaction was to try & eat them (not very polite...), but she figured out how to tuck them into his collar so he couldn't get to them.  Brutus patiently allowed her to do this for quite some time, and then let her parade him around to show everyone.  I was proud of my little guy, had to take some photos!!  I can't remember the little girl's name, but she was just adorable as well, see for yourself: 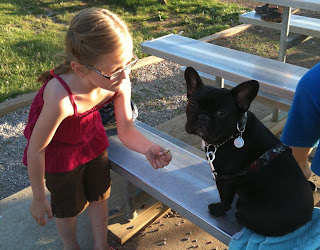 One should never take candy form a stranger, but what about a flower? 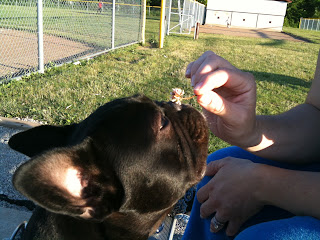 It's important that we all take time to stop & smell the flowers - or was that stop & eat the flowers? 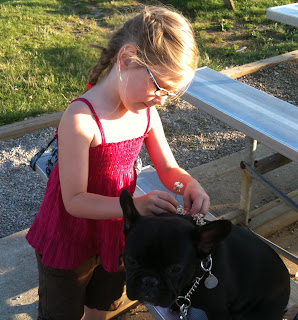 Such a patient guy for  his adoring fan... 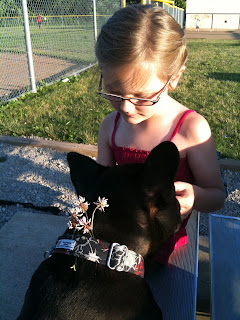 What a sweet boy you are, Brutus!
Your pal,
Sedona

What a sweet doggy you are! I must admit that I wouldn't have been so nice to the little girl. Banjo would have enjoyed the attention though.