BIRTHDAY WEEK - starting with a walk down memory lane...

I can't believe how the time has flown - Brutus turns 1 year old this week!
Seems like just yesterday I sat in disbelief as I stared at the little black ball of fur curled up on a pillow on my my lap....
Last October we decided it was time to bring a new puppy into the pack, since we weren't sure our geriatric JR, Duncan, would make it through the winter & we wanted to always have a companion for our chocolate lab, Mason.  A French bulldog was a sort of compromise - my husband wanted an English bulldog, I was more of the terrier/portable dog mindset.  We stopped on the way home from a Chicago road trip to check out a breeder in Waseon, OH (near Toledo) who we had been corresponding with over the internet.  When we arrived at the breeder, we were officially looking for a creme female Frenchie.  There was a 7 -week old litter with two little girls that matched that description & were not yet spoken for.  They were terribly cute, but so young that it was hard to tell what their personalities were really going to be like.  Plus it would be another 5 weeks before they would be ready to go to their new home - that meant we'd have to make the 3 hour trip again to pick her up.  At this point, my husband Paul spoke the now immortal words  "So do you have any Frenchies that are ready to go home today???"
The breeder did happen to have a few older pups left over from a previous litter.  They were brindle males, but we decided it wouldn't hurt to meet them.  The first two pups she brought in were polar opposites - one was absolutely crazy (so energetic that it just spun around in circles) and one that was very shy (he
was happy just to sit in the corner, didn't want to make eye contact).  As much as I tried, I couldn't make a connection with either of them, as neither seemed to be the Frenchie I dreamt of.  Then the breeder said "oh, there is one more little boy from this litter, I just couldn't carry him in with the others".  She returned with a little guy who melted my heart.  He was happy to play when she put him down with the others, but also wanted to cuddle & kiss when you picked him up - the perfect middle ground!
About an hour later, we were back in the car with a 9 pound, 13-week old  puppy.  We weren't really planning on bringing somebody home that day, so we had to stop at PetSmart to pick up the appropriate supplies.  By the time we arrived home, the little guy was christened "Brutus", after the Ohio State Buckeye's mascot (we're huge college football fans!!).  BTW, the runner-up name was "Divot" (we're golfers) - but I think what we picked has turned out to be the perfect name for our fabulous Frenchie!  He grew into it in both form & personality!
Here are some pictures from our first day with The Brute.  As he snores on the couch next to me, I can't help but be amazed by how he has grown - now 25+ lbs!  I wouldn't trade him for the world, and am so thankful that he came into my life.  So for now, let's go back to October 2008, on a trip down memory lane.... 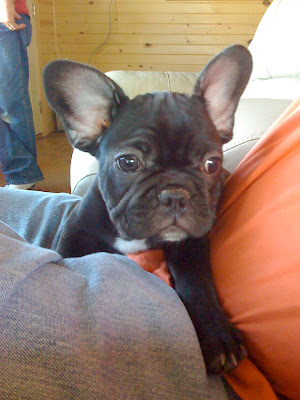 The VERY first photo we have of Brutus, still at the breeder's, 13 weeks old.  Look at the size of those ears!! 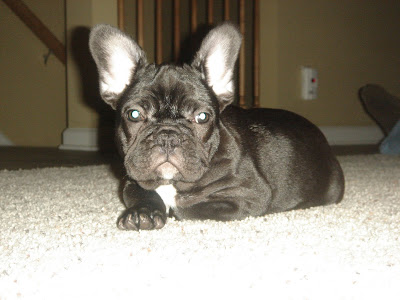 Just came home, but already has the confidence of someone who owns the place! 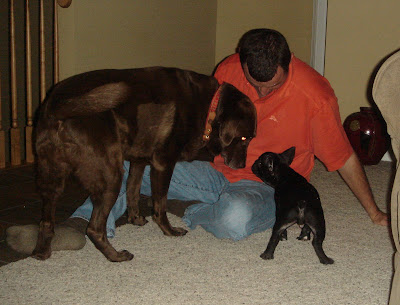 Hi big brother Mason!!
Supervised by Paul (this is my husband's first appearance on my blog). 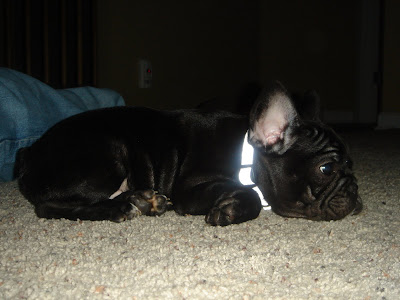 What an exhausting day this has been!
Brutus always looks more wrinkly when he is tired!
Tune in Tuesday for day 1 of the festivities in honor of Brutus' first birthday!
Posted by BRUTUS at 1:31 AM

I always wish I had pup picture of Sugar... you are lucky to have such cute ones of the brute!!

Happy Birthday week. You were the cutest baby! Those ears, my Mom smiled so big and giggled.

We think the happiest days are the days that puppies come. And such a cute puppy too. Happy Birthday Week.

Ohhhhhhmydog my heart is melting from those pictures!!!!! (Pee-S Brutus we found you from an award our friend gave you!) Can't wait to keep reading about you!

What a cute little cuddle bug! Happy Birthday big guy....and for the record, us wimmen of a certain age look more wrinkley when we are tired too. Pam...Bonnie n Puffers support staff...I'm the wrinkly one.

what a great story - we never pick them they always seem to pick us - i love those ears they are so adorable.

hiya Paul - nice to see you on the bloggie

it is sweetie's birthday tomorrow she will be 3

You sure were a cute pup. And now you are a handsome doggy! Happy Birthday week.

Happy Birthday Week, Brutus!
I love all those puppy pictures!
Thanks for sharing them!
Kisses and hugs
Lorenza

What a great trip down memory lane, Brutus! It was fate that brought you to your family, as it was in my case too (I was supposed to be a pink-nosed male).
I liked reading the 7 things about you, too. Thanks for sharing!
Your pal,
Sedona

BRUTUS IS SOOOO CUTE.. I WANNA HUGS AND SQUEEZES HIMS...

BELL WANTS TO JUMP ON HIM TOO - SHE LOVES LITTLE DOGS..