Paul & I are hitting the road this weekend - actually we're hitting the airways first, then the road - for some driving/sightseeing out west.  No dogs on this trip, so I had to arrange some alternate company for the boys.  A you might imagine, with 3 dogs this is always a complicated production!
Duncan is the hardest to make arrangements for, since he's too old & already confused under normal circumstances - can't imagine boarding him, as at 17 he's never been in a kennel. Luckily my dad is nice enough to stay at our house to keep Duncan company for the few days we'll be gone, so he gets to be in familiar surroundings.  It'll feel like a vacation for Duncan though, since Brutus & Mason won't be there (you can only ask so much from your family, and taking care of all 3 dogs is really a lot!).  Mason, on the other hand is the easiest - Mr. Low Maintenance! Boarding is old hat for him,  since Paul & I have kenneled him numerous times for weeks when we've taken multiple long vacations over the last 10 years. But, for Brutus - a dog who has never as much as spent the night alone in a crate - a kennel will be QUITE the new experience...
Granted, the place is very nice, more like a spa!  Clean, large, airy runs - big enough that Brutus & Mason can share one.  I have them signed up for several activities each day (sounds like camp...) including "game time", "cuddle time", extra potty breaks, & even a bedtime snack (that last thing was part of the July special, Paul- not paying extra for the grilled cheese & frostypaws, honest).  A really cool thing is that there are webcams all over the facility, so you can check in on your pooch from the road via the web!  But still - Brutus will have some serious reality-checking to do, since for once he is not the absoloute center of attention.  He'll have big brother Mason for company at least, and the staff were all over him when we went for a dry run yesterday, so I think Brutus just might get some extra/unscheduled attention.  Here's a photo of the main kennel (oops, I mean "spa") area:

As I packed this morning, Brutus noticed something was afoot.  Some of you have been following long enough that you've already seen what Brutus thinks of suitcases (if not, check out our earlier post Hittin' the road, it's one of my favorites).  The dogs get to take their beds, toys, treats, ect. to the kennel, so Brutus was really concerned when he noticed me packing thier things: 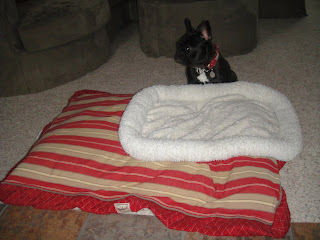 This is DEFINITELY not where the beds go.  What is she up to??
So OK, I'll have at least as much mental anguish about the whole thing as Brutus will.... But in my defense, for as sturdy as they look, Frenchies have some very unique problems that render them quite fragile if you don't take their needs seriously (especially the overheating/heatstroke thing).  I'm sure the kennel staff think I'm nuts, since I must have already told them 10 times that Brutus needs to stay cool - and I haven't even dropped him off yet!  Plus he has medicine to take & I had to give them detailed instructions on how to mix his special food.... and I know these are competent people!  Another good thing is that there is a veterinary practice at the facility, so medical attention is right there in the unlikely event that it is needed.  Oh, man - where's the prozac??? Not for the dogs - for me LOL!!
Anyways, I wouldn't want to disappoint our dedicated followers, so I promise to continue posting from the road.  I came up with what I think will be a fun idea to keep the posts Brutus-oriented even though he and I will be on opposite sides of the Mississippi.  Ever heard of the kid's project called "Flat Stanley"?  (If not, check it out his wikipedia entry).  Using a laminated & foamboard-mounted version of our Lili cartoon, I am going on the road with "Flat Brutus".  So before I take him to the kennel, I felt it was approrpiate to introduce Brutus to his flat self to make sure he approved! The pictures say it best from here!
Wish me luck on the drop-off in a few hours..... 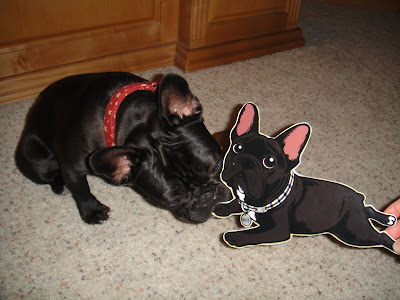 Flat Brutus?
What do you mean "Flat Brutus"?
What does my agent have to say about this? 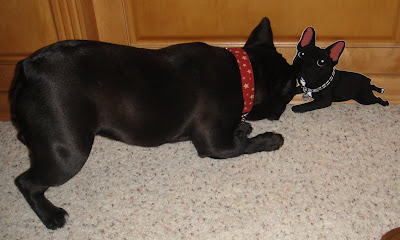 Something about this thing looks familiar.
I must say, he's quite handsome... 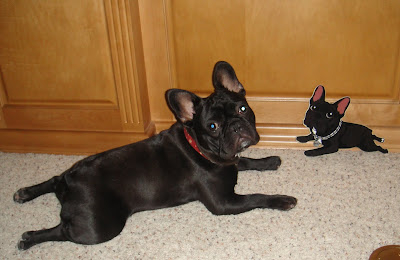 So you got him to stay here & keep Duncan company, right mom?
Because I'm going with you & dad, right?
Why aren't you answering me? 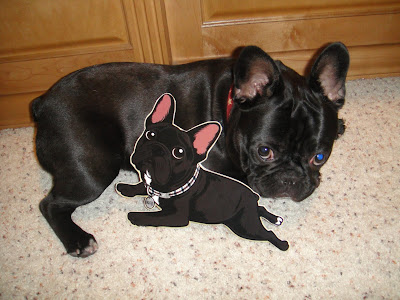 Uh, oh...  I got a bad feeling about this.
You & me better stick together, little guy -  I think things could get ugly!
Posted by BRUTUS at 9:32 AM

OHMYGOSH So cute!!! We can't board the pugs in a typical boarding place because the girls were in puppy mills. Really only Sophie is bad but when caged, she scratches and cries until she bleeds. The others would probably be ok. We take them occassionally to a place that they have their own little 'house' with a TV, bed, etc and a yard but Sophie tried to dig out under the fence. She's not a fenced-in kind of dog. Our wood floors next to the door of their room prove it.

HOW did you make the Brutus-on-foamcore? It is PERFECT! DIY instructions please!

I hear you and Mason are going on vacation to a "spa". That should be lots of fun for you two. I think your mom has Flat Brutus so she won't miss you so much, but don't worry, he could never replace you.

What a cute idea!!! We may have to have a flat "Arrrooo Crew" go with us on our next trip - they don't know it yet, but the whole pack, even Java, has reservations at the ummm spa.

We wish Brutus lived close so he could come stay with us. We wouldn't even make him go n our pool.

Be strong Brutus and Mason, I will pray for you. Give them those puppy eyes and hopefully there will be lots of treats.

Brutus, it sounds like you're going to a cool spa.

Flat Brutus might have some fun, but I bet you & your brother will have more fun!

Brutus
You awe too cute fow wowds. don't look so wowwied, spas awe fun and you'll have lots of stowies to tell all of us wif all the cool adventoowes you'll have, ow you can come and stay wif me
smoochie kisses
ASTA

OMD, Brutus, that one picture where you're the mirror image of your flat self is to die for!!
I think you'll be just fine in your temporary digs, they look like a 5-star place to me. And with your big bro to keep you company AND the camera for your humans to check in on you, it's a win-win!
Can't wait to see your flat self out & about on vay-cay!
Your pal,
Sedona

Where you guys going?? Did you check out the Barkley in Beachwood? It is supposed to be the cats meow and even has "poolside" suites! Haha! I like $75 per night, you can't beet it!

Brutus, my new friend...Hope you guys have a great time. That is cool mom is letting you bring your bed and toys. Have fun.
Lily & Benny
Check out our adventures!!

Oh no....the wee Brute isn't going along? GASP! Oh...his heart will be a'breakin...and if it was little me...when you got back somebody would be a'regrettin' it too!
Bonnie - wee bit of neglect/revenge thingy going on

Brutus!! I love your little "mini me"- it looks just like you!

looks like your mom went away without you, but Im sure you get to have fun at the kennel with some new human friends!

we have been host to many frenchies, they definitely have some special needs!! but we love them soo much!

Momma read your whole travel log, but every time she saw flat Brutus she was laughing. Why is that? She says now she knows how she can take adventures with me, yet without me.