At long last, here's what so many have been waiting for: action shots of Brutus doing agility!
In the future I hope to be able to show a little more variety, as these are almost all jumping pics.  We are hard at work, hoping to be ready to make our debut in the ring as soon as Brutus turns 15 months old (minimum competition age in most of the agility associations).  He is training on all obstacles now, having just started the teeter (looks like a see-saw) and weave poles within the last month.  As soon as we are presentable, I'll have someone video us (Dad, that means you).
These photos were taken at an agility demonstration we were involved in last month.  Most of the jumps are 12 inches, which is a little higher than what we will compete at initially; 8 inches, based on Brutus' height.  Regardless, you can see he clears them easily - impressive since he is only 14" tall himself!
I was so happy with Brutus, as this was our first "public" performance.  Despite lots of laughing and clapping from the crowd (we were the entertainment, after all), he focussed on me & did as I directed off-leash.  In fact he was more energetic than usual, despite warmish temperatures.  Seems like Brutus so enjoyed being in the spotlight that he found a higher gear than what I can normally inspire during our practice sessions!  We didn't turn in the fastest time by any stretch, but I was impressed & the crowd was delighted, so it was definitely a success!!
Hope you enjoy the photos! 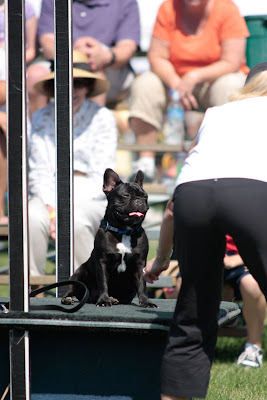 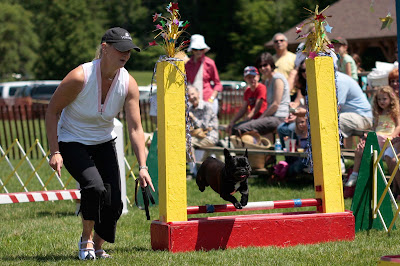 The dog is a natural at agility!  The handler, on the on the other hand, needs work... 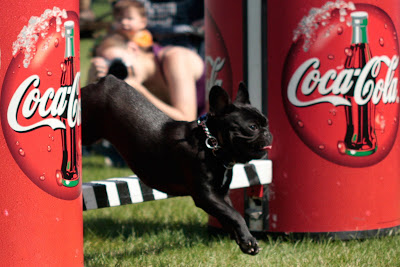 Gee, maybe Coke will give us an endorsement for this... 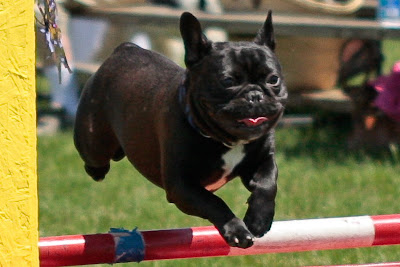 Gotta love that tongue, it's always out when he jumps! 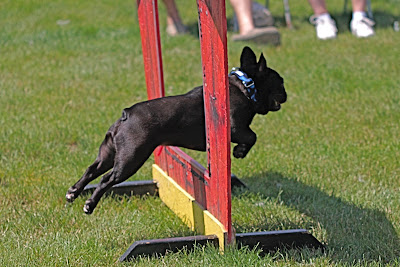 Flying through a strange obstacle - not a regulation jump, but that didn't slow him down! 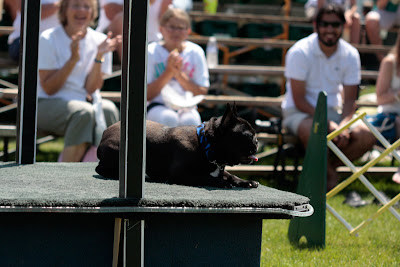 Pausing to take it all in (this is called a pause table, dog has to "down" for 5 seconds).
The crowd loved him! 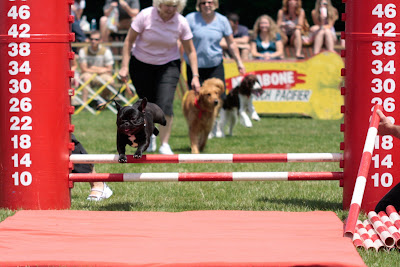 From the high jump competition.  I was amazed he cleared this, and with room to spare!!
And last, but not least - my personal favorite picture.  The look of concentration!! 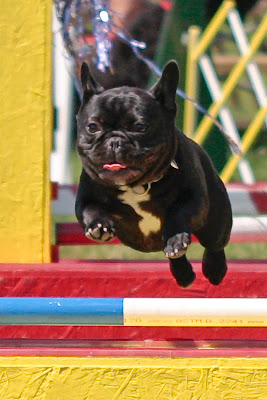 Michelle, these are great! I love the close ups of his face! He is a star!!

Good job, Brutus and Mom!
You look so ready for big competitions!
Kisses and hugs
Lorenza

What awesome action shots of you, Brutus! Great job!

That Super Frenchie pic is a classic. BOL!!

Way to go Super Brutus. Those are some great pictures of you in action!

concentration tongue, my dads always has his out when hes concentration, You looks like your having so much fun all you need is a Super cape

Michael Jordan always had his tongue out too!

Brutus, I am sooooo impressed! You are amazing! I bet you were the crowd favorite, too, by their expression in that picture :-) The little dogs always get the most applause 'cuz they're just so doggone CUTE popping over those jumps. I wanna see you weave and go through the tunnel next! My human is starting me on agility classes this fall, I can't wait!
Your pal,
Sedona

Great work Brutus! That's just what my wife says about agility -- Dennis knows just what to do, but she messes him up!

Oh my gosh Michelle, those have got to be the cutest pictures ever!!!

Those are some great pics - i must have a thousand pics of mine doing agility - but the jump pics are always my favorite - wood clears his jumps by a foot sometimes - and if you can picture the same body type of Brute - but 70lbs. it is just so funny to watch

Those are some great action shots! Good Luck in Agility.

It looks like you did a real good job on the jumps and stuff. You even made it look like fun!

Wow! Look at that Frenchie fly!
Pug hugs and kisses!
The Pug Posse

Great pictures!! I love his expression. I think he's the first Frenchie I've ever seen do agility. Do you ever have problems with heatstroke (black coat) or breathing problems (flat face)? I think he looks so sleek and beautiful and athletic. Gratz on the awesome pics.

AWESOME Brutus and Michelle! I am so impressed... can't wait to see this guy in action in person!

Lori and the Assisi gang

Those are super action shots. You must have a good photographer. I LOVE agilities! Only thing better is swimming (OK, and maybe food).