Ever get that clammy feeling??

The beginning of fall in the midwest means that it's time for a yearly tradition: clambakes!! Either you love clams or you hate them (some non-enthusiasts have likened them to gritty, fishy-smelling gum), but even if you aren't partial to the mollusks, there are plenty of other yummy things to fill up on - chicken, yams, veggies.  Assuming one doesn't drown their eats in butter, it's actually a pretty healthy meal, and if nothing else, the clambake always makes a good excuse for a get-together!
So as part of our Labour day weekend, we headed out to Paul's parents' place on Lake Erie for a big clambake.  All of Paul's family was there, including his brothers & sisters with their families, and lots of cousins, nieces & nephews. The three neighbors on the cul-de-sac also joined in, along with their own families.  Most brought their dogs, so there were no fewer than 11 dogs all told!  Our boys had plenty of playmates (although Mason hung out in Big Earl most of the time), and were beat by the end of the day.
We closed off the cul-de-sac (thanks in part to Big Earl), so there was plenty of room for the festivities.  The weather was perfect, and the yellow jackets (bees) didn't even turn carnivorous until late in the day (their last hoorah before a fall frost does them in).  Here's some snapshots of the gorgeous day, our family and (of course) Brutus! 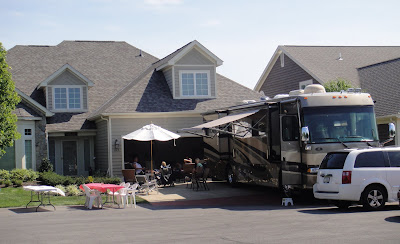 Setting up for the big shindig.  Despite the beautiful lake view out back, for some reason we always seem to hang out in the garage.... 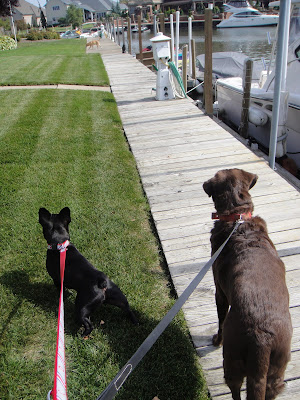 Here's what we didn't spend much time looking at - Lake Erie! 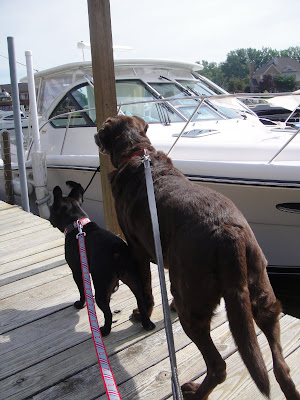 Brutus and Mason checking out the dock; neither of them were interested in getting any closer to the water than this. 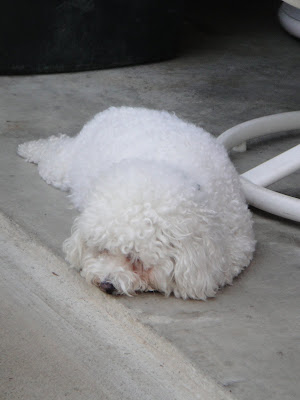 The Bichon sisters (Aunts Lilia, Lilly & Lucy) spent most of their time sleeping... 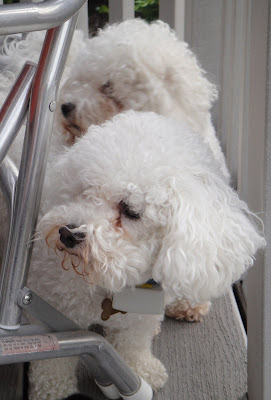 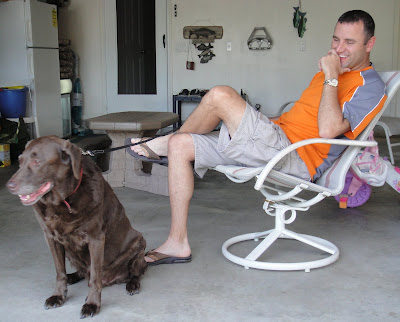 Here's Paul chilling with his Mason. 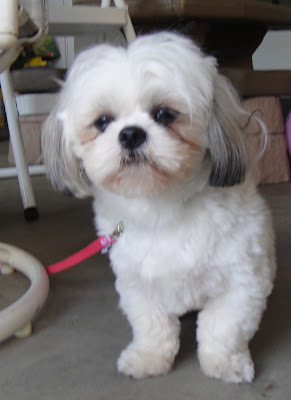 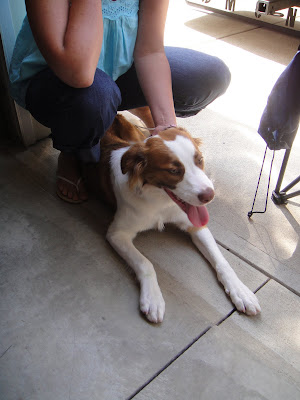 Here's the newest addition, 2nd-cousin Molly.
She is a 10 month-old rescue dog, thought to be a Boxer-Aussie cross.  I think she looks more like a Brittney spaniel than anything else! 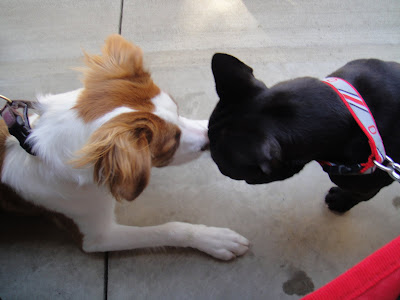 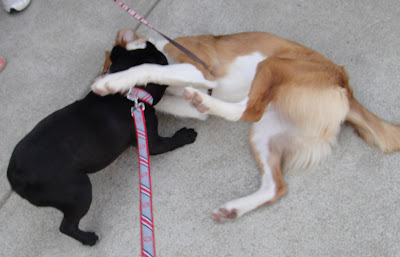 ...and turned out to be well-matched in wrestling abilities.  Not sure who showed up whom, but they certainly deserved one another!! 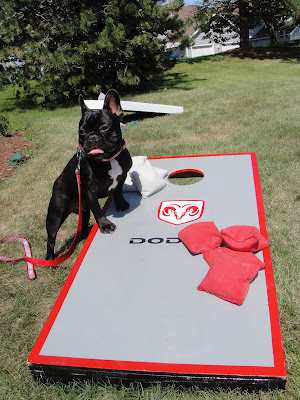 Next, Brutus supervised the Cornhole tournament (another midwest tradition). 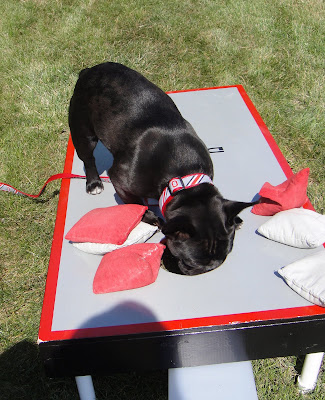 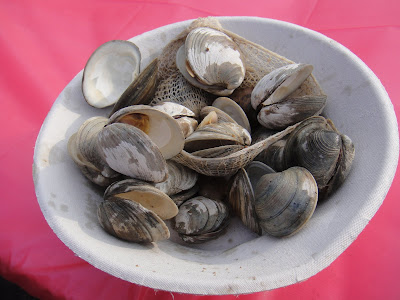 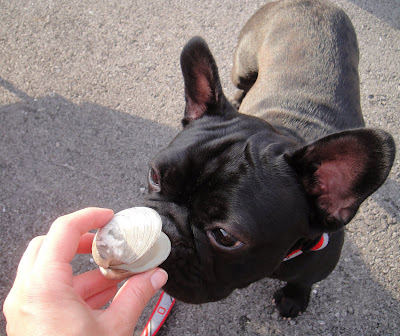 Brutus had to check out what all the excitement was about, and, predictably... 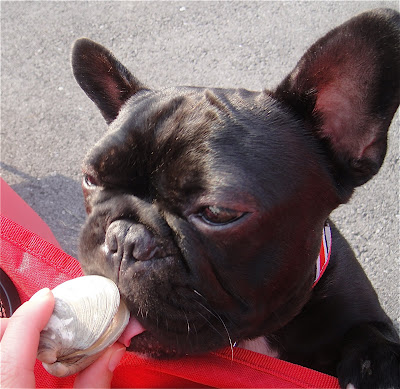 ...wanted to eat the clamshells! 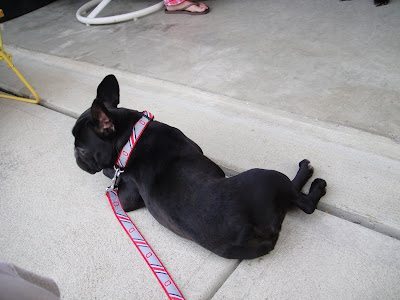 It was a great day, a good time had by all.  And lots of tired puppies to boot!!
Hope everyone else had a great long weekend - I'll post some more tomorrow about our first official camping adventure with Big Earl!!  Oh, and in case you didn't hear, Ohio State had a very ho-hum performance against Navy, eeking out a 31-27 win.  Next week is a HUGE game, at home against USC, so that will certainly set the tone for the rest of the season.  Think Brutus might need to schedule another strategizing session with Coach Tressel before then, guess he didn't listen close enough last time....
Posted by BRUTUS at 3:18 PM

Mom says life is too short to worry about the butter!

We are both drooling!

Hugz&Khysses,
Khyra
PeeEssWoo: We see Springer (or Brittany) too!

Oh Brutus
You sure look like you had an awesome time at the lake. Our uncle has a boat on Lake Erie. Those stinky things in the shell are yuky. But like you, I would go for the shell. Smart move. Your house on wheels is coming in handy I see.
Have fun
Benny & Lily

I clam up when it comes to seafood, but Star will eat anything!

By the way, is Delila dating anybuddy? If not, does she like to dance?

Wow, that does look like a relative of mine, I will have to check my family history. That looked like a wonderful day. Brutus, you and Molly looked like you were having a blast together. I am not sure about the clams but I would like to chew on the shell for a while. It rained here today, but we still had fun.

licks and sniffs,Sasha
p.s. My Mommy just wanted you to know that Wisconsin won and Bucky Badger could beat up that big acorn thing mascot of yours any day.

Looks like you all had a blast! Wish I could've gone to the lake. Can't wait to see more pictures. My favorite is the one of Brutus licking the clam shell. Cute!

Hmm, my mom person is confused. You vote for Ohio state, but spell Labor day with that extra U that us Americans don't use. Are you Canadian??

we watched the football game too - mommy said we had to root for brutus team - since her schools teams all stink!!mso we can help cheer on your team!!

Thanks for visiting my blog!! Wow, what a fabulous weekend you had with your family..mine was, yawnnnnnnnnnn. Mom and Dad worked on removing wallpaper and painting. We did manage a walk to the park with some friends.

Hope to see you soon, you are a cutey!!

Glad to know you all had a pawesome weekend!
Kisses and hugs
Lorenza

HI FROM THE PURPLEHATTER! I WOULD LOVE TO DESIGN SOME AWARDS FOR YOU ALL. SEND ALL EMAILS VIA MADMANHATTER@GMAIL.COM SEND SOME PICTURES YOU WOULD LIKE AND WHAT YOU WOULD LIKE THE AWARDS TO BE SUCH AS YOUR ONE OF A KIND AWARD ETC...

Looks like lots of human and doggy fun. And yes Brutus make sure you talk with Coach Tressel and get the game plan ready for this week, there's nothing we'd love more than to watch USC lose, we know you'll be barking along with us.

Great party! Are you sure the long weekend is over already?

It sounds like you had a wonderful day!! Thanks for sharing.

Puffy and I like to roll in clam leftovers. The gulls sometimes drop clam bits in the back yard and if we find em, we do a full body roach thingy....and sometimes we actually make it to the SOFA before SHE detects the marevelous aroma of clam yuck. Then it's madness n mahem for a bit while we get all scrubby dubbied and pawfumed. Sorry about yer team, the VOLS won, but it was a gimme game.
toodles,
Bonnie

That was one cool-looking shindig. Might have to start a clam-back tradition down here in Va. That looked yummy.

Mama says...Mmmmmmmmmmm, clams..she likes the ones out of the Atlantic Ocean...do these taste the same??

Looks like you had a wonderful weekend. I especially like the photo of you and the clam shell!

We have a boat up at Port Clinton...my guys go up and fish almost every weekend!

Brutus..we presented an award to you today!!

Stop by when you can!!

Wow a clam bake sounds like fun. It was nice to meet your Fur-relatives.


Wags and Licks,
Mollie and Bobo