Monday morning we waved good-bye to Paul's family and headed out from our 2-night stent on Lake Erie.  We pointed Big Earl West, and ventured out on our first actual camping excursion. The boys did well in the coach and were fabulous while on the road. 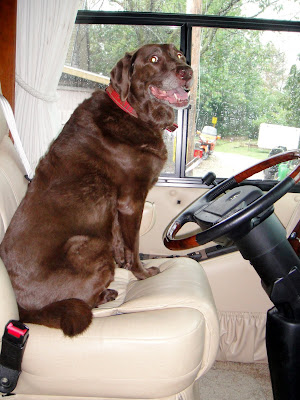 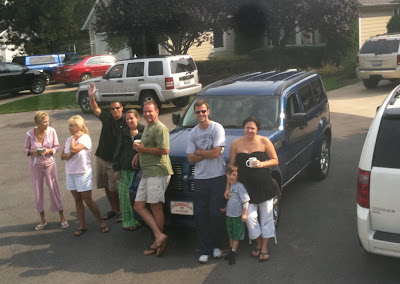 Nothing like pulling out with an audience!   Thought they were going to break champagne bottles or throw confetti!! 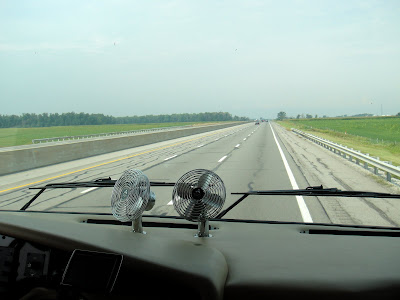 Not much to see across this part of Ohio!  Looks sort of like Nebraska... 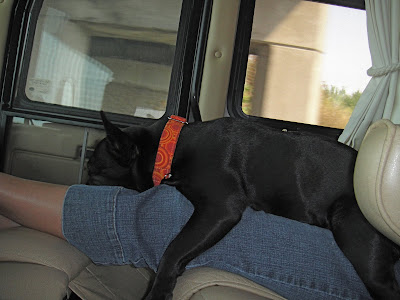 To say that Brutus was relaxed while on the road is an understatement...
A few hours later (including a short stop at Bass Pro Shops to pick up some necessary supplies), we arrived at a KOA site near Toledo, Ohio.   As we pulled into our site it was pouring rain - naturally!  Poor Paul had to go hook up in the rain, but everything went smoothly. 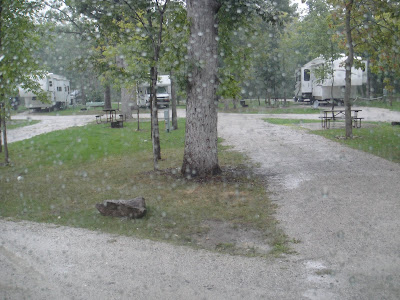 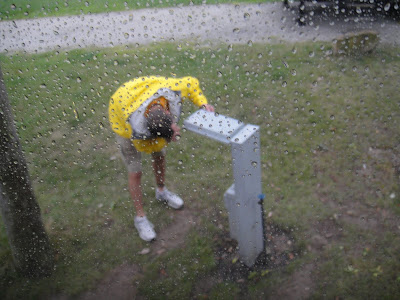 Nothing like plugging in 50 Amps for the first time when it's pouring!
By this time Brutus & Mason had come to think of Big Earl as home, and were just happy to be along with us, instead of stuck back home in a kennel!    It was yucky outside, but back in the coach were all the comforts of home. 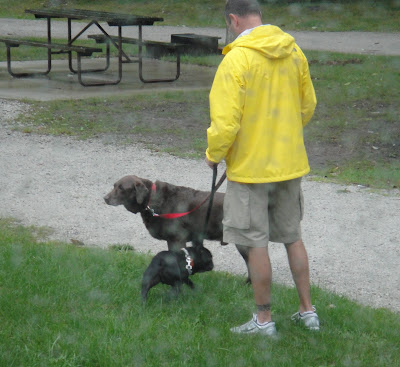 Dad had a better rain coat, so he got potty duty! 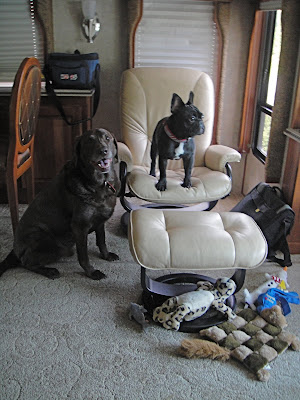 What more can you ask for?  Good company, comfy furniture & stuffies!!
We certainly didn't let the rain didn't keep us from enjoying our day - we just rolled out Earl's awnings and set up our grill. 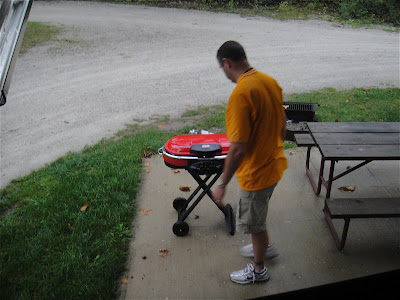 We had a great dinner - steaks, corn & potatoes - not exactly "roughing it"!  We spent the rest of the night catching up on blogs/internet, playing cards and Farkle (a fun dice game), then falling asleep to the sound of raindrops on the roof. 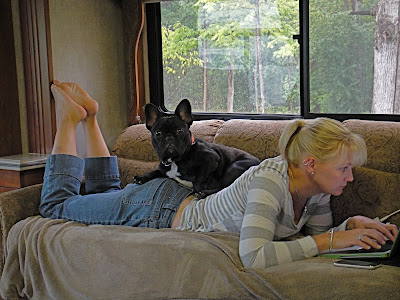 Catching up on our blogs, Brutus in one of his favorite spots! 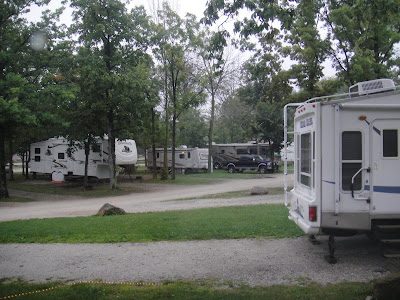 We acquired some more neighbors through the afternoon... 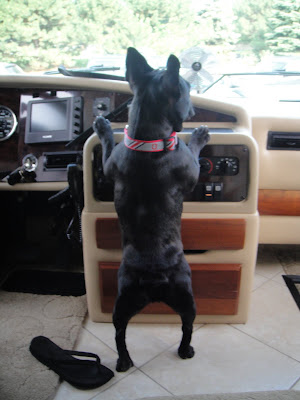 ... all of whom had to pass Brutus' discerning glare as they pulled by! 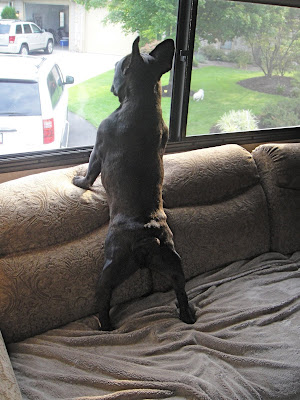 Brutus, Chief Security Officer for Big Earl
After a good nights' sleep, we had a leisurely Tuesday morning then hit the road again just before lunchtime.  We took a brief detour North through Ann Arbor, long enough to stick out our tongues at the Wolverines!  Brutus had never been out of Ohio before, so we thought - what better place to go than the lair of his biggest rival?? 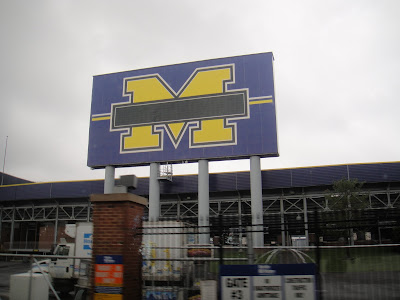 Michigan Stadium - home of the Wolverines (the biggest rivalry in the Big 10, Michagan & OSU)
We arrived back home early this evening.  All in all it was a great maiden voyage for Big Earl, no real catastrophes to report (other than one slightly damaged cabinet door - guess I don't know my own strength...).  So for now, Big Earl sits dark in our driveway.  Tomorrow I get to clean him up, then he gets a few weeks of rest before we head out again - for our next trip we are planning a early fall trek through New England!!  We can't wait!  Thanks for tagging along on our maiden voyage!
Posted by BRUTUS at 8:37 PM

Brutus is such a handsome boy! I've always wanted a Frenchie--they are so cute:D. Maybe one day I can get one.

Brutus, you are too much! We are so proud of you for driving that big motor home all by yourself. You are cuuuute!

By the way, Riley and me have an award for you so please stop by our place and pick it up.

I do hope by the next trip Brutus learns to relax!

Tank woo fur sharing your adventure with us!

What a great trip!!!

I told my Mama I so wanted my own Big Earl...she said to go ask Daddy...Daddy says to ask Mama..I think I am getting the run around!

Hi, Brutus!
You found the best "spot" to relax during the trip!
Glad everything went well and now you are back at home!
Kisses and hugs
Lorenza

What an awesome first adventure in Big Earl!

The picture of Brutus laying on your back is priceless - I've never seen a dog do that, only cats!

Brutus,
Sounds like a great adventure that you had. I liked the pics of you being the security guard, LOL that was cute, I would have done the same thing. Even at home, nobody walks on my street without me knowing about it. Looking forward to more adventures.

I would like staying in Big Earl, cuz my idea of roughing it is the A/C on low!!!!

You sure are lucky having Brutus for security!!!

Brutus buddy looks like you had a blast breaking in Earl. Good job being the security guard hope the humans paid you for your services with some steak and potatoes. Did you get a potty break at Michigan stadium? haha Can't wait to see all the other places you and your crew visit with big Earl, you got the life lil buddy.

Furry cool trip! We loved seeing you stand on your hind legs...Too cute! You wouldn't mind two extra poodles would you? BOL We are no strangers to the Farkle game. Momma loves playing that game.


Wags and Licks,
Mollie and Bobo

Brutus, good job on patrol and keeping the family safe. When you went to Ann Arbor, you were like 90 minutes away from me. We could have met up and spit on the Wolverines together. My Mom wants to go to New England so we will look forward to that visit. Big Earl is pretty cool.

Oooo Brutus - you are one spoilt frenchie! That is an awesome vehicle! You must feel like you are in heaven! ...and isn't it wonderful that you can go with your family! a 'take away' home!
Wow, we are impressed!
We are sooo glad you all had a wonderful time. We look forward to all your future adventures.
Lots of licks
MAXDOG IN SOUTH AFRICA

It sounds like you had a wonderful adventure. And a great security officer.

It's just like "Travels with Charley"! Only with a better rig, two dogs, two people, and Internet access!

Spoiled. You even have recliners. Come pick me up and take me with you please!!!!

I love the pictures of Brutus on guard duty and cuddling with you. Looks like he's definitely a Velcro dog like Jackal. Just wish my Velcro dog didn't weigh forty pounds. Had fun pretending I was there with you guys.

hey Brutus, thanks for the commentary.....feels like i tagged along on this maiden trip, TQ

can't wait for your next trip. what did you do to help with the cleaning after the trip or were you just keeping tabs on the hoomans while they cleaned???

Looks like a great trip! Bentley & Lexus asked me to stop by and let you know that they gave Brutus an award today.

Looks like fun - I wish my parents would have a house with wheels....I would be chief of security too as I do that so well at home without wheels. Cannot wait to see more adventures.

Glad you had a good trip!

Looks like a great trip! (And FYI, you are always plugging in when it is raining or dark. That is the Murphy's Law of Motorhomes!) Looks like you camped in a really nifty spot, and your teevee (that would be what humans call a window) had some good programming! Glad to hear the maiden voyage went well!

What a cushy way to travel! We'd sure love to try that sometime! It looks like fun!

Good job on the security detail! And what a great place to help your mom person catch up on the blogs!

Ahem, us from Michigan are very proud of our stadium. We'll have to see what happens this fall!

Ann Arbor is only about an hour from us. If you come back (to watch U of M beat OSU) we could have a tailgate!