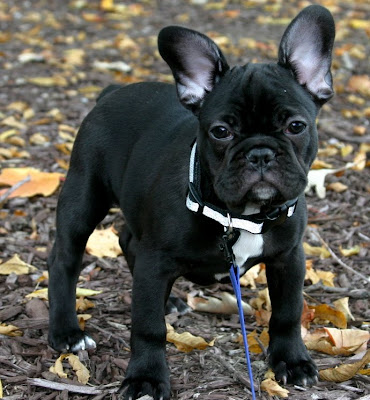 Hard to believe, but one year ago today is when we brought Brutus home!  The time has certainly flown... Life has certainly never been the same since the day he crossed our threshold!
During his birthday week, I already did a post about the day we met Brutus at the breeder. Don't want to bore you all with that again, but our newer followers can find the post here.
In some ways Brutus has changed so much.  The original 9 lbs. of Brute has matured to an impressive, muscle-bound 25 lbs.  He has more or less grown into his ears, and his head is still becoming more substantial by the month (male Frenchies can take until 2 yrs to mature compeletely). His velvety puppy coat has grown out into the shiniest, blackest coat ever seen on a Frenchie. He is housebroken (well, usually). Brutus has learned so much, from puppy socialization class and learning to be on a leash, to now being ready to make his debut in the agility and rally ring (no one ever told him he was a non-sporting breed).
Then again, some things have stayed the same. Looking back on when we first brought Brutus home, many of his personality traits were already so apparent at 13 weeks.  He always wants to be the center of attention. He has no fear and takes on new things without hesitation - as long as he is at my side. Brutus was, is, and always will be a momma's boy, and prefers me to every other human on the planet. He is very energetic, and very athletic (especially for a bulldog). He thinks very highly of himself, walking with a swagger no matter if we are alone in the back yard or amongst hundreds of people. The Brute truly has a sense of humor, and always keeps everyone laughing. Thankfully he has remained the cute, good-looking boy as well - when all else fails, this is his saving grace!!
So as a tribute to his "Gotcha Day", here are some photos from our first days with the Frenchie puppy that has grown into the Brutus you all know and love. 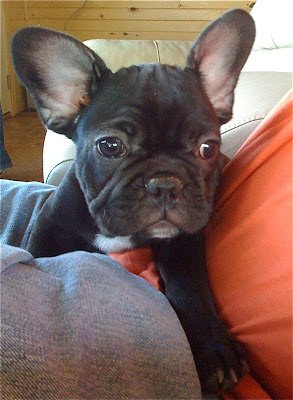 13 Weeks old: All ears and eyes, ready to take in a whole new world! 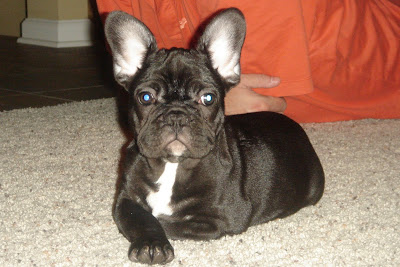 From the moment he arrived in our home, Brutus acted like he owned the place! 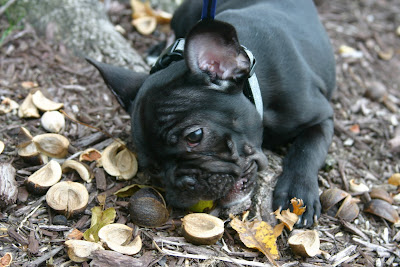 Very early on, he showed a talent for exploring the world by eating it! 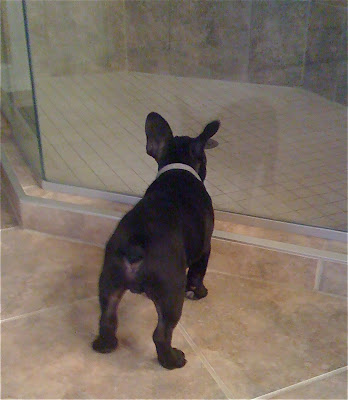 Brutus has never had a problem with his self-image!  Here he is marveling at his reflection in the shower door. 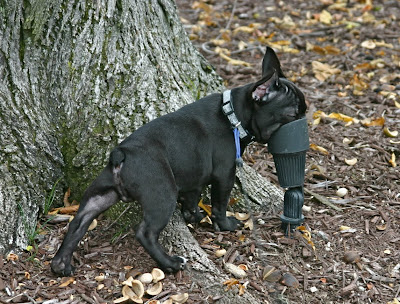 Not such a bright idea, buddy (that's a landscape light)!  To this day, Brutus sticks his face boldly into everything!! 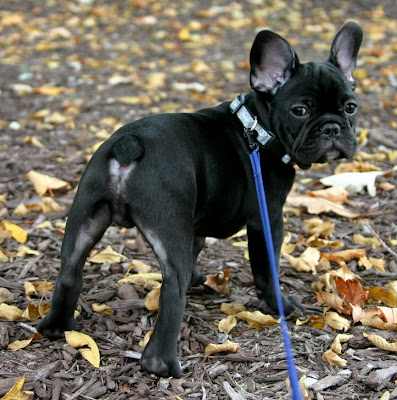 Here's looking back on a fantastic year!
I love ya little man!!
Posted by BRUTUS at 12:15 AM

Brutus, you sure "Gotcha" a good pack of humans! Happy Day, buddy!

loved your baby photos and glad you love yourself as i can't stand myself in the mirror....i know i'm hooman and prettier than that dawg staring back at moi

you have some good hooman there so be good to them ok?
got to sleep as whatever Twix put in that toilet bowl is still working - tastes dang good too

if this is what the hooman call 'a hangover' i'd want it to hang more bol...

Aw, what a great post. Love the puppy pictures, especially with his head in the light! Jealous of the part that says he's fearless. Maybe he should meet Marge and rub off on her..

Happy Gottcha day Brutus,
You were so cute as a pup and even cuter now!!!

Have a great evening
Jazzi

There's proof that you were always too stinkin' cute!

Hugz&Khysses,
Khyra
PeeEssWoo: But woo should have inkhluded some FLAT Brutus especially since we saw Flat Mango today!

It's almost like a second birthday!!! Did you get anything for your special day?!

I like the photo of you stuffing your face in the light!

Happy Gotcha Day Brutus!!!! You are still a cutie!!

Happy Gotcha Day Brutus! You made me and Mom laugh with your head in the light! I saw your comment on Coco's blog about boys night and I think you should start planning! It would be pawesome! I would love to crash that one!
Snuggles,
Twix

Happy Gotcha day Brutus. We totally love the picture of you inspecting the light. You do a very thorough inspection. Hope you got extra treats on your special day.

Lots of Licks,
Oak and Swish

Happy gotcha day Brutus! You were such a cutie and now you're handsome young man.

Happy Gotcha Day! Nice to see you have not lost any of your zest for exploring. I can't believe you are 25 pounds! All muscle, dude, for sure.

I love the picture of him sticking his face into the light, hahaha.

Oh my goodness, Brutus!!! You were an adorable puppy and you've grown into quite a handsome young man (if I do say so myself!)! Happy Gotcha Day!!!! Your mom is so lucky to have a boy like you!

Brutus!! Congratulations on your special day. I am going to dance for you in celebration. You are so handsome now, but what a cutie you were(Mommy can't stand how cute you are). I am a Mommies girl also, so I understand that part. I love you Brutus.

Happy gotcha day Brutus! You were a super cute puppy and now you're a handsome boy!

You are a beautifal and handsome little guy Brutus! I thought your momma was describing us for a minute!
Humans are great
Benny & Lily

Happy gotcha day, Brutus! You sure were an adorable pup!

Brutus makes me want to add a Frenchie to our pack! I just love him. He is so handsome and seems like such a joy.

Cuteness overload!! Thanks for sharing the great pics. And Happy gotcha day, Brutus!!!

Baby photos are the best! I just posted some yesterday.

You are one fine looking Frenchie Brutus, so happy one year to you!