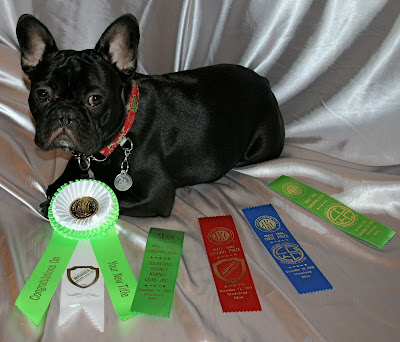 Hi there!  I feel like it's been an eternity since I posted, having been busy for the last 4 days at our biggest show.  I'll try not to bore you all with the details, include just the juicy bits and some fun things from the weekend!
I'm so happy to say that Brutus completely redeemed himself from last weekend's antics, conducting himself admirably amidst the most hectic environment he's ever been in.  To make what could easily become a long story as short as possible, Brutus competed in 3 rally events and came away with 3 Q's, winning our large class one day and coming in second the next. Better yet, that perfect track record earned our first title, Rally Novice (RN)!! 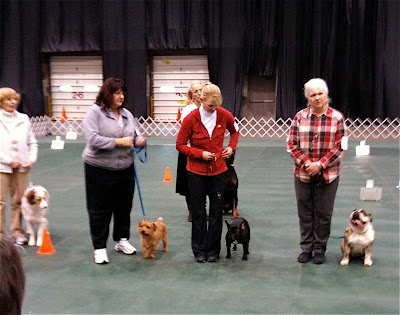 To our left is our new friend Lilly, the English Bulldog; she took second, so the bulldogs went 1,2 in the class!!
Enough with the technical details, I'll try to show some other more interesting things we saw at the Crown Classic.  It is one of the largest shows in the country with almost 3,000 dogs there competing in conformation, obedience & agility.  With almost 30 rings, it is a big spectator event as well, actually charging general admission to the public.  The only venue big enough to hold the event is the IX Center, a large convention facility located next to Hopkins International Airport.  And it took up the whole building!!! 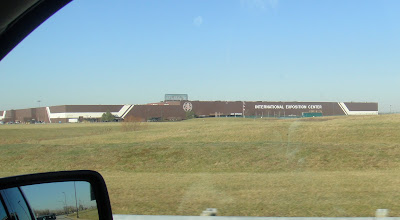 The show attracts dogs from all over the country, many of whom arrived in big trailers and RVs (too bad Big Earl is already hibernating for winter!!) 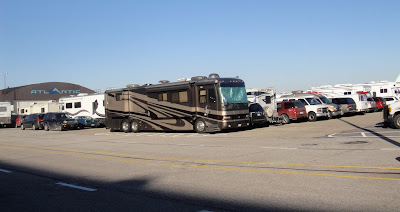 It was cold, windy & snowing, so luckily the competitors had a special entrance to go in... 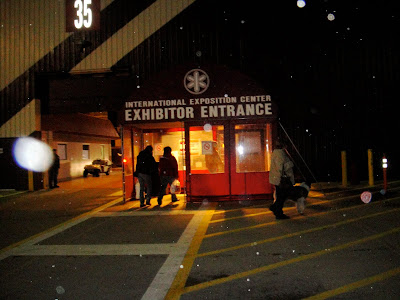 ... and once inside the grooming and crating areas seemed to go on forever!  With so many rings, we literally needed a map to find the rally competition area!! 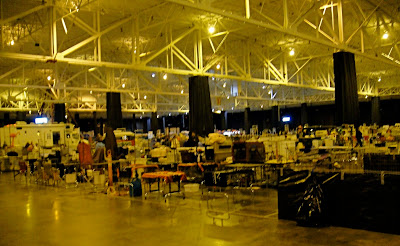 When we weren't competing ourselves, there were plenty of other things to take in. Brutus & I watched the conformation Frenchie classes, cheering on our friend Lori as she showed two of her dogs. 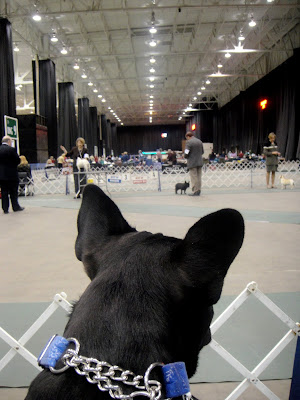 I made sure Brutus paid attention to how nicely all these Frenchies behaved!! 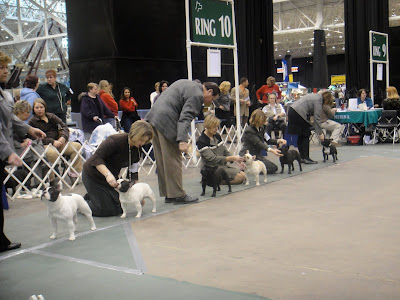 Every size and color of Frenchie was represented! 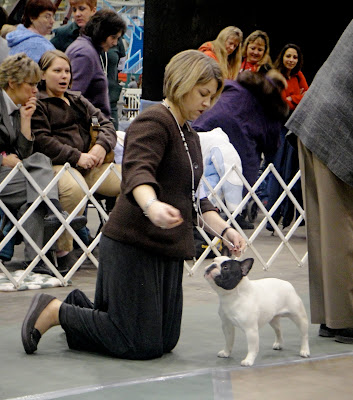 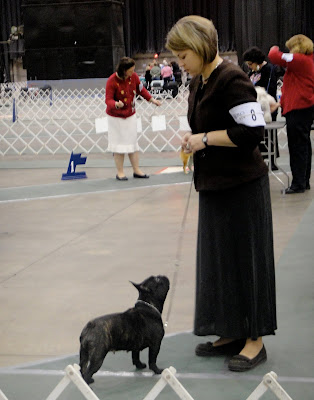 ... and here she is with Biwa, who had a great weekend, winning her first Major!
There were tons of vendors, selling everything imaginable you or your dog might desire. Brutus took the opportunity to do a little holiday shopping for his sweetie Stella! 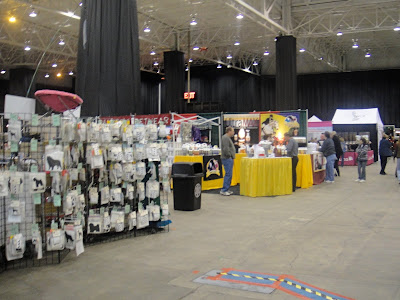 We met lots of new dogs, even a mastiff that looked like Mango (only smaller since he was still a pup, at a mere 180 pounds !!!) 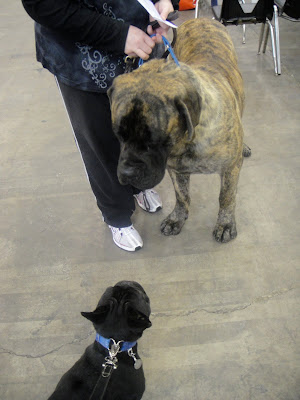 Wait a minute!  You are only peculiarly huge, not relentlessly....  Impostor!!!
We made sure to take plenty of time to relax, as it was just so much to take in!  The bullystick that Stella sent once came in handy (notice it's gotten shorter!). 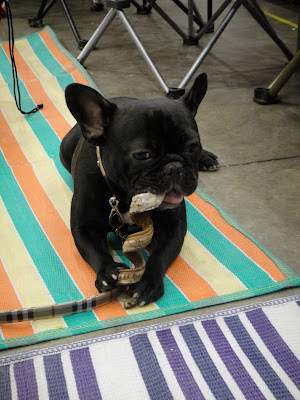 When all was said and done, we had lots of good times with friends, 5 new ribbons, a title, 6 sore feet, and one very tired Frenchie!  Yep, that's Brutus out cold in my arms!! 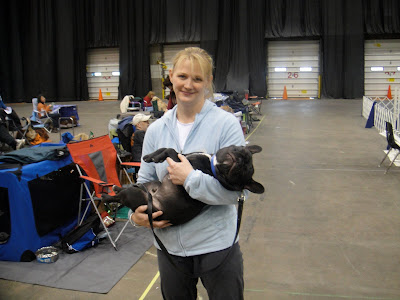 After a very successful conclusion to three weekends of showing, it's now time to rest our weary heads!  No more shows until 2010, thank goodness!!
Think I'm going to go join Brutus, who is already snoring away contentedly!!  Hope you all enjoyed a little taste of our weekend!
Posted by BRUTUS at 8:41 PM

After all that winning, you deserve a good nap in momma's arms!

Congrats on all your awards Brutus!! You so totally rock!!!

way to go! pretty soon you will have all sorts of fancy letters after your name!

Congrats on a great weekend!!!

You met a teenage ME! How cool is that. I wonder if it was one of my relatives. My dumb brother Floyd is a champion and has scattered his large and not as deserving as me self all over dogdom with lots of little Floyds running around.

That place looked super scary. I admire that you were even able to concentrate with all the sounds and action around you. You must have some zen thing going to win all those awards. Way to go!

We were thinking about you earlier today - wondering how the show went. And we're pleased to see that all went well. CONGRATS!!!!

Congrats to you and Brutus!!

Hey there Brutus
You guys are impressing me more and more each blogpost!!! Wow, what a show and congratulations for doing so well!!! You truly are amazing.
We use to do those kind of things when I was younger (albeit not such big shows!!!), but mom eventually got scared of it all. Now we are just home dogs.
Well done again!!! You are a star!!!
Lotsalicks
MAXDOG IN SOUTH AFRICA

That is awesome Michelle!!! I totally forgot about it...Mayna would have loved it I think!!! Let me know when the next one is!

Woooohweeeee!!! Congratulations. Your Ribbons are grrrreat. I am soooo very much proud of you. I would have been scared silly in that place.
I am sooo happy for you and your mom. Good going guy.

Congrats Brutus!! That looks like soo much fun! Glad you had a good time and were able to leave with all those ribbons!

Congrats buddy! Looks like a pawesome place to spend the day!

LOL... Brutus passed out is probably the cutest picture I've ever seen. I just want to squeeze his adorable face!

What a comeback, Brutus! Enjoy your new RN status and your winter off!

Hello,
Iam the animal lover and I just came from Rocky Creek Scotties.
I love to watch Frenchies. I have never known one in person butwould sure like to.
Congras on you award and ribbons.
You have a very nice blog.
Hugs, Fern

Thanks for sharing your weekend, and mega congrats to Brutus and Mom for the great performance.

Congratulations, Brutus! We are so very proud of you!

Good job Brutus! What are you doing with all the ribbons?

Way to go, Brutus! Now you can add RN to your name, that's pawsome! Great post/pics about the show, must've been very chaotic but you kept your cool (as did your hooman). You will be my inspiration when I attempt to get my RN title in the new year :-)
Your pal,
Sedona

Giant congrats to you and your family Brutus!

Brutus we are so PROUD of you! What an awesome job.
Benny & Lily

We are so proud of you! Now rest and have a great holiday season.

Congratulations my dear Brutus. You always make me so proud!

I got a little worried when I saw all those Frenchies. Sure they're all beautiful, but remember we have somethin' special. I'm glad your mom brought your bully stick to help you relax.

Mom let me get you something recently, but she's been busy with our new sister, Betty. Hopefully she gets it out in the mail for you today.

You are one truly rockin' competitor!!