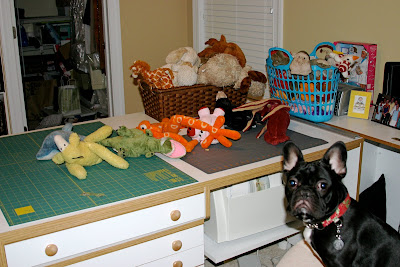 As you have seen in recent posts, the boys can be hard on stuffies.  Actually, it's specifically Brutus that is hard on them.  Mason had lots of toys that had lived peacefully with us for many years, needing no more than an occasional trip through the washing machine. Then Brutus came along...
The young Brutus was pretty easy on the toys, never tore them apart as many puppies might. But recently he has developed a fascination with chewing parts of them, gnawing relentlessly on an appendage or some other protruding part until it just falls off.  Then there is the tug-of-war that frequently occurs between Brutus and Mason - resulting in open seams and stuffing everywhere.  Combine that with Brutus' propensity for eating random things, and you'll understand how the stuffie infirmary has recently overflowed. 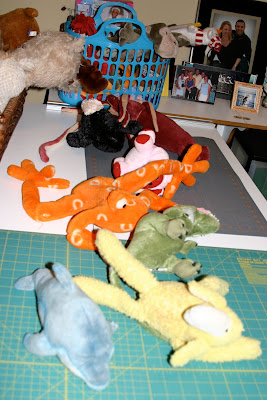 I need to get on this lot so that I can clear the craft room for christmas wrapping!  Think I'll have to do some triage, as there are some stuffies that are in more dire need for repair than others.  For instance: the alien frog that is scheduled for removal of his 2nd eye.  Brutus happily offered to do this for me, but based on recent events (aka the "eyeball incident"), I declined.   Also pictured are various toys in need of seam closure, amputation, or just put indefinitely in the I/R due to having large & Brutus-prone eyeballs!! 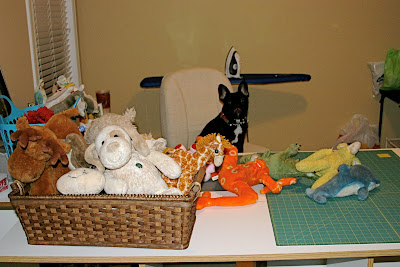 I have set aside and afternoon to work with the needle & thread later this week.  Some stuffies will be permanently retired if deemed unfit for Brutus.  Hopefully most can go back into the rotation.  One way or another, I have to clear some space for wrapping presents...  Wish me luck!!
Posted by BRUTUS at 8:56 PM

Hi, Brutus!
Sure your mom has a lot of surgeries to perform!
Good luck!
Kisses and hugs
Lorenza

I had a stuffie repair session a few weeks ago. She hasn't been so bad on them since then for whatever reason!

I love seeing their faces when they get the toy back after its "hospital" visit :)

Brutus, you are one lucky pup! Our Mom never sews up stuffies. They are torn to shreds then we have to get new ones!!!

Infirmary! After Biwa finishes "operating," her patients go straight to the morgue! - Nathaniel

Candy can relate to Brutus! If it were up to Captain he would have a ton of pristine stuffies... but since Candy is around only a few select stuffies will survive (the carrot, to name one!). We got the kiddlets new toys last night and Candy ruined a new stuffie in 20 minutes!

Brutus you have one handy momma. Good luck fixing your stuffies!

Pee Ess...I go for the eyes first too!

It's all fun and games, until you do what my brother Knuckles did and chew up Aunt Jol's BRAND NEW phone! She wasn't too happy about that.

If you had all the pups out there with injured, maimed, limbless stuffies send them to your surgical center, you could start up a very lucrative business:) Brutus isn't alone in his propensities for stuffie chewing fascination.

Good luck!!! This is why I don't allow stuffies anymore. :)

She washed all my stuffies last week and now I don't want anything to do with them. Puffy used to pull leggies off stuffies....I tend to shake em really good, count them, nest on them and protect them from Puffy interference. I move em around a lot. She used to hafta get dull boring stuffies for Puffers...like the bone or circle shapes. If it had leggies or tails or eyes, it would get destroyed. It looks like Brutus is trying to protect his stuffie stash, or is he saying, hurry up Mom and gimme em back!
sniffies,
Bonnie

Wow Brutus...good job on the stuffies! You sure no how to get the job done and....you're sure lucky to have a mom who can repair when you're all done!

wow, Mom gave up on fixing stuffies and we get them, destroy them and in the trash they go!

Wow Brutus, maybe you should give your mom a break for a little bit on those stuffies? You are still cute as ever and congratulation on the recent awards!

BOL! Dear Brutus, we are soooo much alike. We'll have no problems getting along after we get married and move into our own home together.

Watch for the mailman. I'm gonna send you my favorite stuffie appendage.

Good luck! You're such a devoted furbaby-mom to take a needle and thread to Brutus' toys!

Totally jealous of your craft room!

way to go on stuffy killing. Mom will bring them back to life again and again!
~wags-n-wiggles~
wild dingo

Gweat job!!!
That's exackly what stuffies awe fow..ask any tewwiew kid
smoochie kisses
ASTA
pee ess, mommi says youw Mom is sooo lucky to have a woom to do all this in

It looks like the patients are lined up right out the door, Brutus! Your mom has her work cut out for her!

Aaaahhhhh toy triange..What a good Mama you are!! My Mama...she just throws the toys out!!!

We have one of those too. Brutus, don't eat too much stuffin's out of those toys. I had to go to the V-E-T 2 times to have stuffin's removed my my guts!