Dog Hair in Everything I Do

OK. We are all dog people, so let's be honest.
Me might try to downplay it to our non-doggy friends, but dog hair is a constant presence in our existance. Some pups shed more than others, from none at all (you lucky poodle and lhasa owners!) to mountains of furry fun (gotta love the dogs with a double coat!). But whether it's removing hair from the dog or removing it from ourselves, we all have to deal with dog hair one way or another. It not only affects our wardrobe choices, it also shortens the lifespan of our appliances, and makes vacuuming and sweeping a much more regular occurrence than normal! 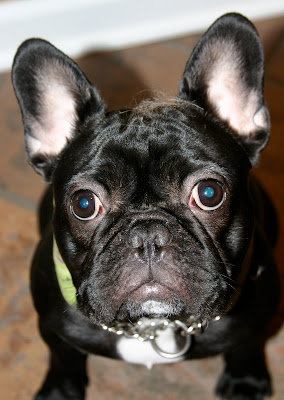 No, that's not a new toupee that Brutus is sporting - it's actually hair from Mason that I noticed had ended up on his head. Yep, that's right - Mason sheds on Brutus!!
For me, there are three sources of hair, including one posthumous; Duncan's white, needle-like hairs still mysteriously grace many objects in the house: 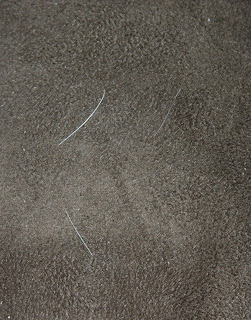 Just like the terrier they came from, the hairs are tenacious - woven stubbornly into fabrics, even got one stuck in my foot like a splinter! As much as I miss old Duncan (he crossed the rainbow bridge last September), I could do without his hair. 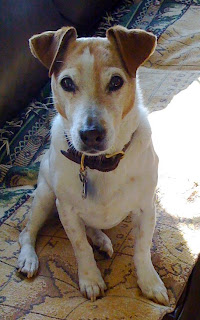 Mason, on the other hand - Sheesh! He is one hairy labradude! Yeah, he looks all brown, soft & cuddly... 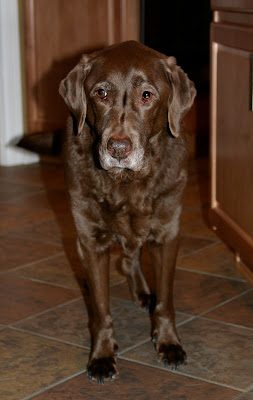 ... but he has a wiry, white undercoat that never stops shedding. 90% of the hair I deal with comes from him (the other 10% being split between Duncan & Brutus). It quickly fills my vacuum (gotta love the Dyson), the lint filter in the dryer, and accumulutales at an alarming rate around the baseboards of my home. Here is a mature tumblefur, ready for harvesting (aka sweeping), after only one day: 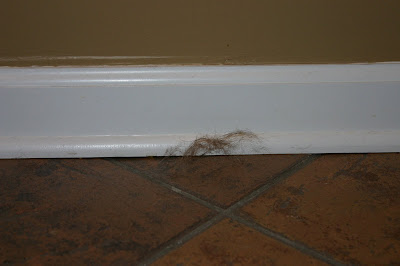 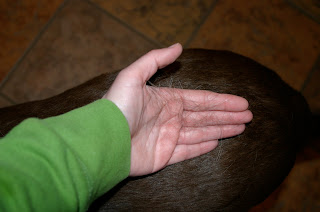 The only thing that has any impact on Mason's shed rate (other than shaving him, which we used to do before he was old & lumpy) is a Furminator. 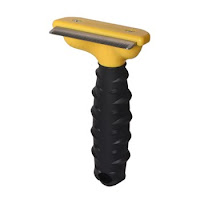 Don't know where I'd be without mine - probably buried under a mountain of brown fur! I have to do it outside, then actually rake the fur off the grass & fill a big trash bag!
Hey, at least we dog people are great consumers - you might say that shedding supports the economy. I'm talking about the hundreds of products you can buy at pet stores that are supposed to stop shedding (supplements, food) or brushes to control it. Or the small fortune spent annually on professional grooming. Just walk down the cleaning product aisle at any grocery or hardware store and count how many products are devoted to pet hair removal! And who would ever be crazy enough to leave home without a lint roller??
Thankfully, Brutus is not much of a shedder. His shiny black coat stays attached to him for the most part! The only grooming required is an occasional rubber curry - even after several minutes of massaging him with one, I'm hard-pressed to have a handful of short, fine, black hair. He also loves to be "rolled" (see prior post). At least ONE thing about Brutus is low-maintenance.... 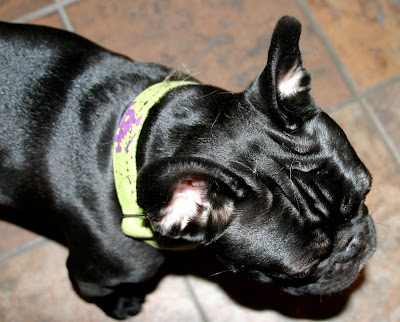 If you biggify, you'll see that is actually Mason's hair on Brutus!!
If the pictures aren't enough, here is a fun song devoted to the topic of dog hair. It was written by a local woman who competes in agility and dock diving. It pretty much sums up how we all have learned to cope with ever-present dog fur! Hope you can watch enjoy it! (If stoopid Blogger won't let you see it, go to YouTube & search "Dog Hair in Everything I Do" by Randi Breese)
Posted by BRUTUS at 9:42 AM

We use the Furminator too! And the shampoo smells wonderful.

Did you know... most wine makers who have dogs will put one of their dog's hairs in the wine barrels? It's like tradition or something. We have plenty around here for Bruce! LOL!

Shannon and the Gang

LOL! Great post. I have pug hair in everything. I even spot them inside the transparent ball point pens. Now how do they get in THERE?? Thankfully blacks don't shed like the fawns, but now that he's eating kibble it's still more than enough IMO.

Moose goes through times when he sheds by the fist full everytime I touch him but mostly I can't get much off of him, even with the furminator! His coat is a little thinner than most labs but I am actually glad of that!
I used to have an old oreck vacuum with no attachments but my Dyson slim is an absolute lifesaver. I can easily fill the cannister after a once over of my house!
Can't wait for your blogger retrospective (or whatever you will call it!) post. There used to be a meme going around that asked how people got stared and I think it is interesting! Mango posted one after Twinkie too.

OOOHHHH I love my Furminator! It's like getting back scratchies!

Mom says that PugFur is more like a "condiment" at this point. She's kind of just given up and embraced it and doesn't let me love on her when she's wearing black.

OMD OMD SOME VERY BRIGHT two legger has FINALLY come to her senses and written a song singing PRAISES to our furs!!!

Really smart two leggers consider a nice covering of our furs to be QUITE THE FASHION FORWARD STATEMENT. AND... a most delightful CONDIMENT!!!
YES!!! Paws up to this intellegent two legger!!! Praise the Furs!!!

We know exactly what you are talking about and Labs are the worst! We have Mars Coat Kings that are basically the same as a furminator and Mom says we should buy stock in the sticky roller place. And, too, we have the Dyson animal.

In our house, we have 2 cats and 2 dogs and my mom says that I'm the only one who doesn't shed enough to make a whole new animal out of. She agrees with you about the terrier hair. My Brudder Ranger is a rat terrierist (who looks lots like your Duncan, actually) and his hair is the most impossible! (She says...not me.) She says she keeps a lint roller near the door for our guests when they leave. I dunno why. I think the extra hair would keep 'em warm!

You forgot to add that dog hair is also a condiment!

Yeah, dog hair is pretty much everywhere here. It freaks my mom out SO bad. In the two-ish years we've had Marge, I think the vacuum has been out more than ever!

I need one of those furminators! Mason reminds me of the chocolate lab I grew up with- i might just have to blog about my childhood dog sometime! (With the help of a scanner, of course :))

As if! As if, Brutus would shed. I bet this poo don't stink either. BOL The video is hilarious! I'll race you to FB. Nah, I'll just share it with the fans who are not the most lively bunch.
As for your mommy's dressage abilities, I'm impressed. Dressage is tough! I would prefer a video of her doing Agility just like you.
Twink!

I always know when my Humans go to visit their Uncle Jimmy's place, cos they come back covered in white fur that reeks of that cat Lancelot!

Luckily I'm more like Brutus in that I don't shed much at all! So instead I leave my Humans something else to clean up: Golden Offerings!

Momma was just about to comment when I let loose a HOOGE fart and she had to leave the room. Hehehe, but she's back (thank goodness our house is drafty).

Mango Momma;
I was warned before I got Dexter that labs SHED. I thought, how much can a short haired dog shed? PLENTY! I cannot believe how persistent lab hair is. It's EVERYWHERE! When I have guests over I have to keep checking the bathroom because his hair gets in the sink and on the toilet seat even though he doesn't even go into that room. I can't remember the last time I didn't find several black hairs on a plate of food.

The furminator works much better on Mango than Dexter. Of course Mango loves to be brushed, which helps, but his fur is also softer and doesn't get all woven into everything.

At work I am always have trouble at the big important meetings where everybody is supposed to be well groomed. There are always plenty of hairs on my good clothes no matter what. Sigh.

Ummm, not sure we have anything pawsitive to say on the subject of shedding hair - we ARE sibes, right? Yes, we have a Dyson, and a furminator brush, and lots of lint rollers, but none are ever enough:) But we must be doing something right, another one of us just showed up:))

Brutus these mom's act like they don't shed. I wish I could roll her..thanks for the mention. She was just thinking about posting another roll me. Anyway. we have that furminator thing. We almost went bald. So we resorted to the vacuum monster and the rollers. We do love your toupee
Benny & Lily

We have that wonderful double coat - mom laughs when people comment that pugs must not shed much...Mom loves her Dyson too!

Yep, I have wiry needle-like hairs that Mom does not like cleaning out of her car but she deals. :) Hey, I LOVED your agility pics Brutus! :)

Oh yea, that song was funny!

Yep, we have hair too. When I clean the carpet hair shows up all over even though we vacuum. It was nice with our old poodle no hair. But the things we put up with for our doggies.

Haaa!
I don't shed so much but my mom amazes about the places where she can find my hair sometimes!
Kisses and hugs
Lorenza

What dog hair?? :p This is maybe the one good thing about Rugby's coat. Lots of grooming, but there isn't hair everywhere!

I hear you on the poky hairs, I've had to tweeze more than one vizsla hair out of the bottom of my foot!

Yes we are part of that non shedding poodle group and momma loves that.

Ummmm.......think I better back out of the room slowly...Lhasa, no shed here...but Mama is STILL finding Addie hairs(our kitty that crossed over about three years ago)in our couches!!

We don't shed that much either but Mom still seems to find dog hair in her food every once in a while. We are cool like that :)

Schnauzers actuall have hair instead of fun making us a non-shedding breed and also hypo-allergenic.

BUT, we have 2 cats that live here & their only purpose in life seems to be laying on things to leave their fur behind!

Roscoe gets furminated regulary! In our house mom says dog hair is a condiment!

Roscoe gets furminated regulary! In our house mom says dog hair is a condiment!