I can hardly believe it, but our blog started one year ago today!  How the time has flown..
Our first post was about Brutus (who was 10 months old at the time) eating his way out of a brand-new travel crate.  It took him less than 5 minutes to escape. 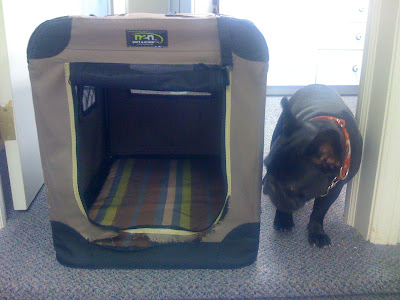 The blog has come a long way since then, and so has Brutus!  I'm so proud of the progress both have made in the last 365 days!
From uncertain beginnings and no clue what I was doing, the blog has taken on a life of its own.  We've managed to snag 134 followers here, and over 200 on Facebook!  Along the way we've made many great friends, hosted a contest, and "spawned" the monumentally popular Flat Brutus project.  I credit Brutus' inherent cuteness and bubbling personality for most of our success, with a little help along the way from my photography and writing.  I never thought blogging could be such an enjoyable pastime - not only has it given Brutus a voice, it has also given me a wonderful creative outlet!
Of course I have to give the subject of the blog, my Brutus, a big round of applause.  In the last year he has changed in so many ways right under your virtual noses.  He's grown physically, maturing into what most be one of the most athletic dogs the breed has seen.  Frenchies are known for being difficult to train, but Brutus has certainly proved that is not always the case; staring with his CGC last May he's collected 3 AKC titles and is currently working on 4 more in agility & obedience.  But as much as anything else, it's Brutus' personality and sense of humor that has enchanted so many.   The things he puts up with for the sake of blogging material!  Sure, he has his moments... but I can forget those in an instant when I wake up each morning and see his smiling face next to (and occasionally on top of) mine! 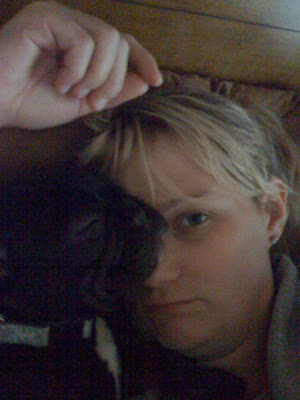 I've said it before, but it bears repeating - the blog would be nothing without all our followers.  So thank you once again for your loyalty, comments, kind words, encouragement, and patience.  You've laughed with us often, cried with us a few times, and have made our lives better.  It's been an honor to have the opportunity share it all with you, and we look forward to many new adventures as we enter our second year of blogging! 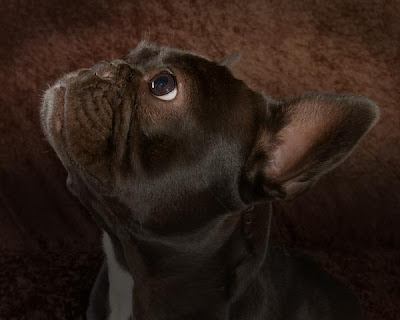 To celebrate our bloggiversary, I'll be making a few changes here, and am trying to decide on a new header photo (the existing one has been up since day one!).  Lots of other things going on in the background, including embarking on our Wild West Earlventure.  Don't worry, we won't forget to take you all along! Wouldn't have it any other way! 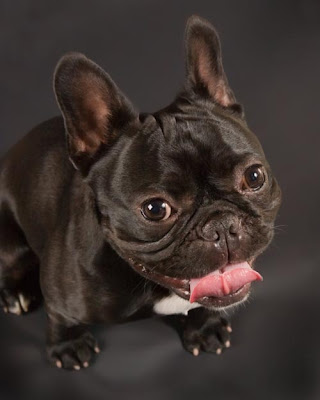 Have a great long weekend and holiday.  Hope you all have lots of sunshine, relaxing, and good times with friends & family.  As they say out west, happy trails!!
Posted by BRUTUS at 12:01 AM

Congrats on your blogoversary!It is a big milestone and we have enjoyed being along for the ride for part of it at least! I think I started following you in the fall...
Can't wait to see your changes!

Congratulations to both of you and thank YOU for sharing your lives with us. I so look forward to visiting your site and seeing you FB posts. I've always love this breed and because of Brutus the thought of having anything other than a schnauzer has actually crossed my mind.

Love the fact that you wake up just like I do, Calvert seems to do the same with my face and top of my head, love waking up like that.

Have a wonderful weekend and enjoy your trip.

Claudia, Nellie & Calvert
(is it another frenchie?!?!)

Lola and also Franklin, too said...

Well, happh Blogaversary to you and Brutus! He is very, very cute. No question about that.

Hi Brutus! We saw you on Sugar's page and wanted to say HI!!! Our hooman LOVES Frenchies! You are especially adorable =^_^= purrs!

We love reading your bloggie and wish you many many more years of blogging fun!!!

I thought you'd been blogging much longer than a year! Brutus is so stinking cute, I'm not surprised at all that people love him! I just want to pick him up and squeeze him everytime I see him!

Bunny and her mom

Congratulations on the past year - both in the blog world and in your performance training successes. I can't wait to see the new blog layout. Thanks for the compliments about mine!

Happy Blogoversary! (Or whatever...) While we missed Brutus' early days (impressive work on the travel crate, there, buddy!), we are thrilled to be along for the ride now! (So to speak...) And we are THRILLED to be a part of the Flat Brutus project! We can't wait to hear how the big Earlventure goes!

Happy First Blogoversary!
And many more to come!
I am very happy to be your friend!
Happy Weekend!
Kisses and hugs
Lorenza

So sweet! Happy Anniversary to you and the cute Mr. Brutus!

Here's to many many more!

Looking forward to coming along on Brutus' next adventures!

Wow! A whole year! It goes by fast doesn't it? Congrats! We have loved getting to know you. Thanks for letting us be part of the Brutus fan club!
Snuggles,
Twix

Woof! Woof! Happy Happy Blogversary, It sure amazing. Glad to be blog friends. Can't wait for your new header ... if you need any help will be happy to help out. Lots of Golden Woofs, Sugar

Gosh! Has it been that long? It just seems yesterday we were sniffing our way around and meeting others. I think the first time we posted here was the French Dip post. It was about this time last year...swimmy pool time! Congratulations to the wee Brute for all his success. SHE is trying to ..um...REtrain me! Maybe this time next year I'll have my CGC title.

Goes by fast, yuh. It has been great getting to know you little dude. I am all over that stunning photo of you at the end.

Congrats on your blogaversary - we have enjoyed the ride along with you.

happy blogoversary! i always enjoy visiting you, brutus and mason. congratulations ona job well done! and i may have missed something...but what is an earlventure? and where in the wild west will you be going?
hugs,
puglette
:o)

Happy Blogoversary Brutus!!! We love reading your blog and seeing what you and your peeps are up to!

Any chance that Big Earl will be traveling through Indianapolis at some point this summer? We would love to meet you :)

Happy 1st Blogaversary! What a lovely post! You sure have made your mark on the blogging world and in the performance world too! Congrats, Brutus! Looking forward to getting to know you better this year!
Big Hugs xoxoox
Sammie

Happy 1st blogaversary Brutus!!!
YOU ARE one special doggie and I am proud to be one fo your friends. I have had fun watching you through your adventures, and your agility stuff. You are just so darn cute and have a great personality!! Heres to another yr!!!

Happy Bloggiversary, Brutus! We absolutely LOVE your blog! It's one of our favorites!

Happy Blogerversary dear Brutus. I hope you received my little pressy in the mail. Please have our mommas email or do what they do so we know when you're going to be here. I hope you saw our blog post. I put up some pictures of potential wedding locations.

I can't believe it's only been a year! It feels like Brutus' blog has been around for as long as I remember (which strangely, is about a year).

Congratulations on one year of blogging!

We had no idea you have only been doing this for a year. Great job and great photos (your poor thing Brutus)! Both of us swoon hearing about your love story with Stella. You give us hope of finding a good man. Mom says she loves your white toenails and they are much easier to cut than all black ones. Ugh. Don't remind us.
Sighs (Kitty), and Snorts (Coco)

Oh Brutus, happy Bloggiversary! You are a doll!!!!

Happy Bloggiversary! We are so happy to have shared in your most exciting life!

Happy blogoversary to you!

That last picture is our favorite.