Hey.  Mason here.  Remember me?  The laid-back senior member of this pack?  I put up with a lot, especially all Brutus' antics.  That's in addition to being referred to as a labradork.  And I never get to post. 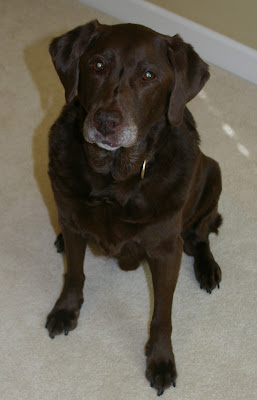 Mom & Brutus are all wrapped up in getting Big Earl ready for our trip out west - good for them.  I'm happy to be inside, chilling on the couch in the A/C (it was 87F here today!!).  They're so busy that they haven't even noticed that snooped into the laptop and put together my own post.  Hehehehe.
So let me tell you about what happened earlier this week at my house - a French bulldog invasion!  No, seriously!!  I was just snoozing on the couch, a nice quiet morning with less harassment than usual from my pesky little brother, Brutus.  Out of the blue I heard a commotion & came out to see what all the ruckus was about.  When I saw the source, I couldn't believe my labra-eyes...

There were six - yes dear friends - SIX Frenchies, breaching the threshold of my noble home!  That might not seem like much, but trust me - it seemed like a million of the little smushfaces!  Could this be some sort of cruel joke?  A daydream (more like a nightmare) of some kind?  Outnumbered 7-1 by funny-looking little beasts?
To make a long story short, it turns out that mom's friend Lori (who is also our V-E-T, but I like her anyways) came over with a bunch of her dogs.  These Frenchies are already finished Champions in the breed ring (click here to see more about their accolades), now looking to put another feather in their caps with a different kind of title.  Apparently mom must consider herself some kind of Frenchie-whisperer lately (so she trained Brutus to jump through hoops, big hairy deal...), as she's been helping Dr. Lori get a few of her dogs ready to take their Canine Good Citizen (CGC) test.

Here is mom's favorite student, Doug (Ch. King of Queens d'Assisi).  I have to admit, he looks like a happy guy! 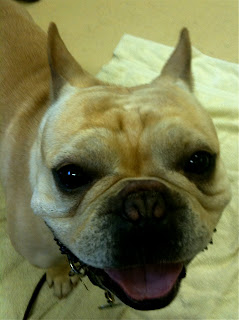 Mom worked with Doug and two of his Assisi Frenchie clan, Gena & Neill, for quite a while down in our basement (which I call the agility dungeon).  It was all old hat to me, just basic obedience stuff that I learned years ago - sit, down, stay, heel, come.  Simple enough, but mom was so ecstatic about having taught Doug "down",  that she took his picture to prove it.  Turns out Frenchies are a lot more trainable than people give them credit for.  Go figure. 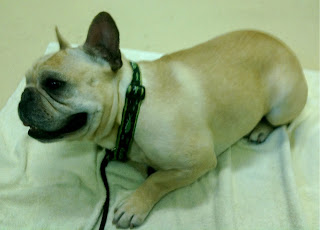 So that only accounts for 3 of the Frechies who invaded my home - you might be wondering if I had miscounted.  Turns out that Doug and Gena recently became proud parents, and three of their 11-week old pups had also come along for the ride & some socialization (at least that's the line mom is keeps trying to feed me...).   Here they are, a boy on the left and two girls on the right.  They represent half of a litter of six, Gena's first. 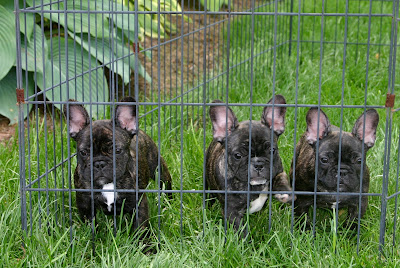 I finally got a good look at them when we all went outside, and I must admit they were kinda cute.  But being the wise & seasoned labradude that I am, I knew they would be nothing but trouble if I acknowledged them.  So I just went about my business - literally... 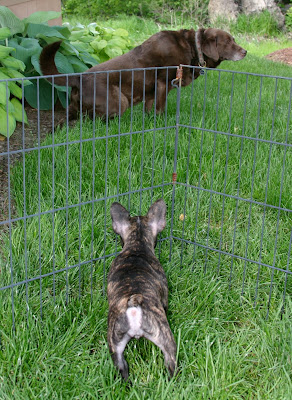 To Brutus, however, it was a totally different experience.  He was a pup himself not all that long ago, you'd think he would have figured out that these were some of his own kind!  I guess it eventually soaked into that big head of his that they were dogs, but he just stood and stared at them for the longest time. 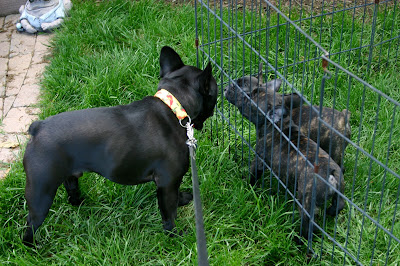 Then mom & Lori let the pups out out to roam free (and therefore piddle at will) in my backyard.  The grass was long, so they could stalk and pounce like little tigers.  Pretty amusing, actually! 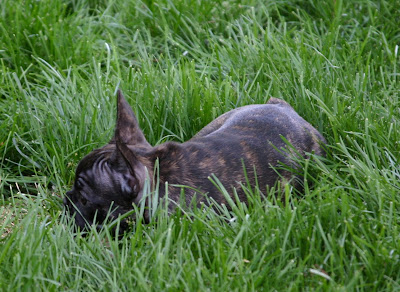 When the puppies started moving around more, Brutus finally figured out that they were in fact some of his own (weird) kind and wanted to hang out with them. 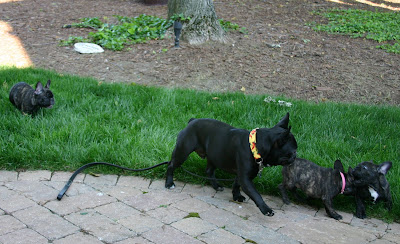 I have to give my little bratty brother credit, he was actually well-behaved for once.  Kind of watched over them and herded the pups around.  One of the little girls especially seemed to take a liking to Brutus, and even took him for a walk (mom had left his leash on, just in case she needed to grab him in a hurry).  Here she is running next to Brutus, carrying the handle of his leash in her mouth! 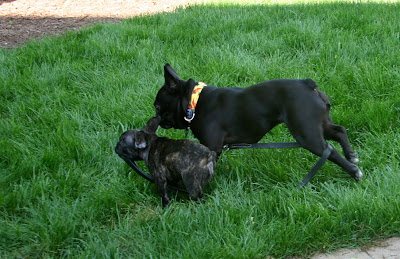 As for myself, I just sat back and took in the proceedings.  I have to admit, it was nice to see Brutus being the one chased, hung on, and generally harassed by something smaller & more energetic than he is for a change.  It's about time he gets a taste of his own medicine!! 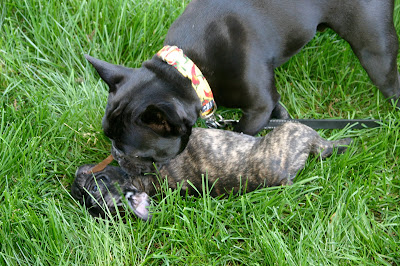 Brutus was actually gentle with them, even when they rolled over submissively after a long game of keep-away with a piece of mulch.  Eventually the pups started to wind down.  It had been an exciting afternoon for the pups, and they piled up for a snooze. 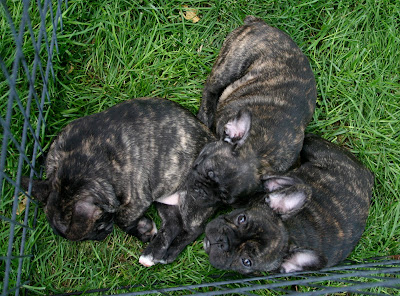 Soon thereafter the Assisi gang packed up to head back home.  In the end I was glad they came, since it gave Brutus a great alternative to his usual pastime - tormenting me!  Here's some photo evidence of how I typically spend a good part my day, a bulldog hanging from some part of my face. 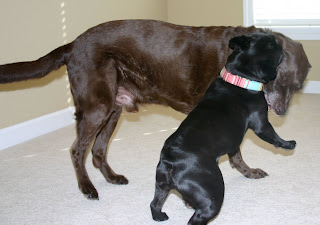 Uh, oh - I hear mom & Brutus coming.  Better wrap it up before they see what I've been up to! After all, I have to put up with Brutus for the next few weeks in a much smaller space than usual inside Big Earl!

Thanks for listening, it was good to get a chance to sneak the blog away from Brutus for once.  Just between you & me, it might do that little ruffian good to learn what it's like to be the big brother...  Think I might be on to something there?
Later, Taters-
Mason
Posted by BRUTUS at 12:08 AM

Wow, look at you Michelle, movin' on up and teaching doggies obedience. Well, you sure are the right person for it, as you have taken Brutus so far!!

The pictures of Brutus playing with the pups are just darling. What a sweet boy he is.

PS - RE the table - I know that AKC is changing their rules (some of those new changes are WEIRD, you're right), but I've decided to keep Marge's auto down. Since I plan on leading out from the table in the upper levels, I think having her in a down will make her stick to it a little bit better :) Besides, she looks so darn sure of herself when her butt slides in to the down and she looks up at me for her cookie :)

Mason, we are so glad to see you - but it brings tears to our eyes in a bittersweet kind of way. You are one handsome LabraDUDE - don't let Brutus call you a dork!!

MASON... I am so very much glad that you got to the computer!! I miss you and think that you should be allowed to post at LEAST once a week!!!
This was a very much excellent and informative post.
Have fun in Big Earl !!

Mason, I see a little sister in your very near future! Take cover, dude!

Awww! That picture of the little faces peering through the X-pen is adorable!!!!

Hi Mason, I'm glad you got to sneak in some computer time. I think Brutus would do well with being the big brother for a change - although you'd then have TWO little brothers which could actually be worse! The puppies are adorable, but still, they're puppies.

Hi Mason! You are SO very much handsome and sweet! You did a good job putting up with that Frenchie invasion. And I just have to say...

SQUEEEEEEEEEEEEEEEEE!!!!! Ohmidogness! It was a bundle of brindle baby goodness right there! With their most beautiful brindle furs and their little stick up ears - well, I practically felt like I was looking into a mirror. Sigh.

Your mom needs to put in her order for the little girl that took Brutus for a walkie. I thinks he mighta met his match!

Uh oh Mason...Those baby frenchies were pretty cute....are you sure your Mama wasn't scoping one out as a future sibling???

Mom is just goo goo ga ga over baby frenchies. If she could talk dad into it we would be in trouble.
What will you do with 2 frenchies hanging all over you Mason??? Oh boy.
You still have height advantage. You can taunt them with a toy all day long.
Sighs(Kitty), and Snorts (Coco)

How adorable the pups are! How do you feel about a Frenchie sissie, Mason? It sounds like Brutus is all for the idea!

mason, it is very good to see you get a chance to post too. We think you are trying to lead up to a big announcement - something to do with some Frenchie becoming a big brother??? Are you holding out on us?

Mason, I feel your pain; being a big sister to Calvert is no picnic. It's getting to the point where he's pulling my across the floor by my woozle!

Mom almost fainted when she saw the puppies, but that photo of Brutus with the little girl leading him by his leash made her loose it. Simply adorable.

I'm so happy to see you post, mom has a soft spot for you... loves the gray on your whiskers.

Ok from one fellow tortured big bro/sis belly rubs to you.

OKAY MOM! I'll get off of Calvert... jeez it's the only way I can post on my own. I can't catch a break!

we had a blast! Tonight one of the puppies new moms came to meet him... he goes home early tomorrow morning a he has a LONG drive home, but we were able to SHOW OFF our CGC training! Gena and Doug would have made you proud! Love the write up and seeing all the kiddos on the blog... 3 weeks to CGC testing... gotta keep up the hard work!
Lori - Mom to the Assisi Clan and invaders! Sorry Mason

Absolute smushda heaven! Such cute babies, makes me want to get Weezer a little brother. SO.DARN.CUTE!

Mason,
No wonder you keep a low profile what with Brutus pulling on your face and generally harassing you. Then the invasion! Good grief! However did you manage to hold up?

hi mason! what a nice post. i can't believe how many frenchie's were in your home! you are so brave. but those puppies are awfully cute. have a good weekend!
hugs,
puglette
:o)

Good to see you Mason! Glad you survived the invasion! Those lil pups remind me of when all the flat Brutus' were assembled prior to their departure!

oh man, that sure was an invasion!