I've been through the desert on a horse with no name... 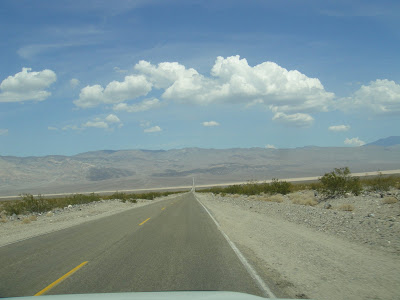 We packed up and left the lushness of Sequoia on Sunday morning (after fiddling around with the air pressure in the tires for an hour), and headed east.  After four hours though the barren desert, Flat Brutus reached his next destination: 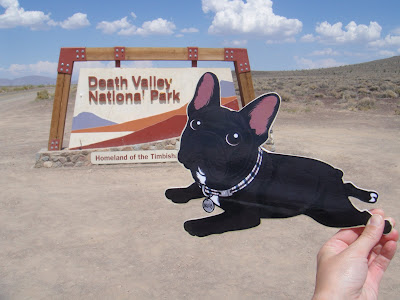 This is a park you can take in from the air-conditioned comfort of your car (unless you are into desert hiking), and it was a good thing.  The air temperature was around 1o7F through the desert, but went up to 122F on the valley floor.
Talk about H-O-T!!!!  It was the same kind of kind of feeling you get when you open the oven door & a blast of heat hits you in the face - except it keeps going.  About 3 minutes outside was all we could take. 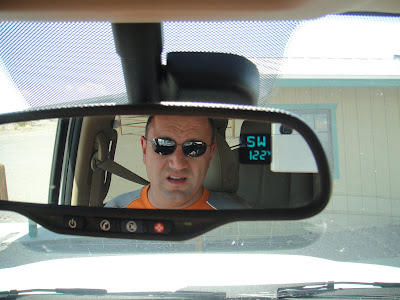 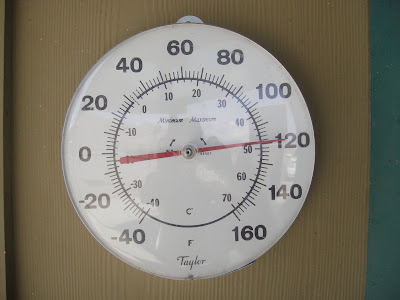 In case you don't believe it, here's another temperature reading!
It was "scenic" in its own way, but most striking thing about the Death Valley was it's vastness. 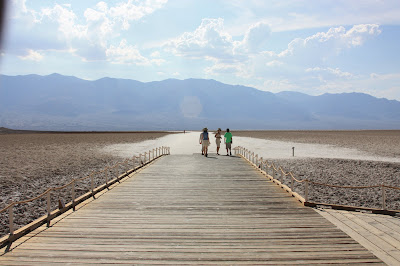 Here's Flat Brutus at the lowest point in the Western hemisphere - in case you can't read the print on the sign, it's 282 feet below sea level!  Badwater Basin is named for the permanent pools of water (which smell like rotten eggs thanks to the hot spring that feeds them) that exist there. 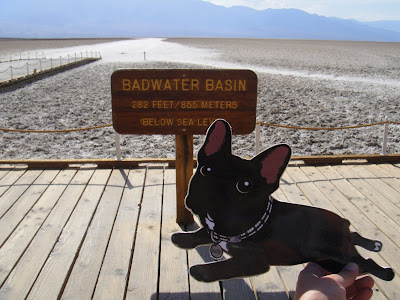 It's a good thing that the real Brutus wasn't here - his poor little feet wouldn't have been able to stand the ground temperature (something I read said it was 180, but I wasn't taking off my shoes to check...).  Who'd want to go for a hike with their dog here anyways?? 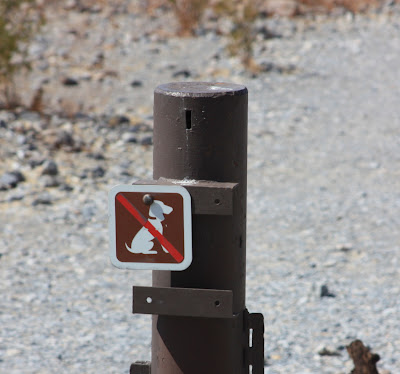 Here's some other scenes from Death Valley: 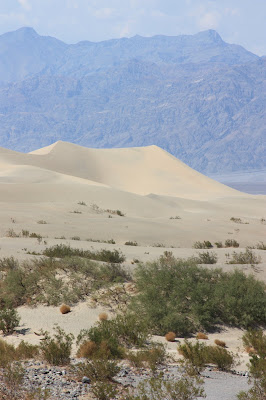 Sand dunes.  What else would you expect to see in the middle of the desert? 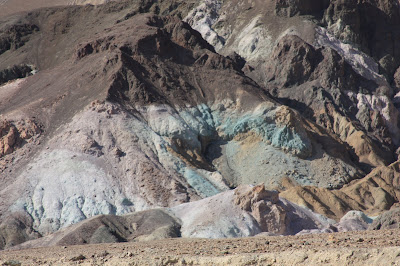 Mineral deposits give these rocks their interesting color.  Maybe it was the heat's influence, but I thought this looked like spumoni ice cream!! 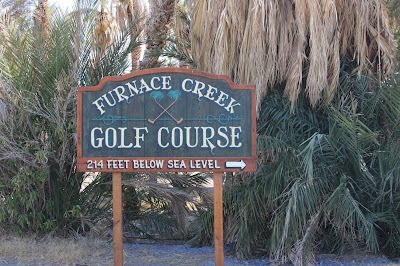 Really?  Guess it's for those dedicated golfers who just can't get enough of the links above sea level... 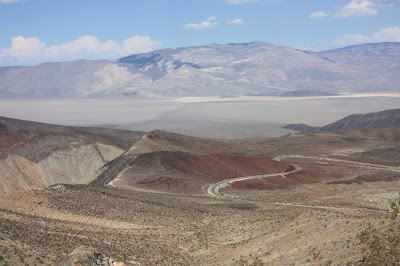 Makes you feel kinda small when you look at things like this...
We've seen some fantastic things the last few days, and it has been a wonderful getaway.  I do miss the boys, and have called to check on them several times.  All the girls I've talked to keep telling me how much everybody there loves my dogs!  Mason is A-OK as I expected, and the staff sound like Brutus has them wrapped around his little paw.  He can be a handful, so I wasn't sure how he'd go over there, but according to the girls there, "he has little hearts drawn all over his chart".  Hope the dogs are as happy to see me as I am to see them!!
Posted by BRUTUS at 11:39 AM

happy the kids are doing okay

Please pawmit me to wipe the sweat off my keyboard!

Brutus is having sooooo much fun without all the diskhomfort!

I am gald that flat Brutus is the one travelling in the desert. Hopefully you are safe and sound someplace with AC, huh?

You must do the shortie dog agilities. You look kind of short to me.

I see we have some pals in common. Those egg head doggies and of course Miss Khyra (who seems to be everybody's friend).

Thanks for stopping by.

It sounds like they are treating you and Mason well at the spa. I think you might be having almost as much fun as your pawrents. We sure are enjoying their vacation pictures!

Great pix! Can you believe they do marathons and centuries there???!? I think the "hotter than hell 100" may be there.

That's the biggest most spacious oven I have ever seen!

What a view! We're not sure we could deal with the heat though! YUK!