Today's post is about our last day of vacation.  It is Paul & my 8th wedding anniversary (hard to believe he's put up with me that long already), so we did a few things to celebrate.  We went down to the strip, did a little shopping, had a nice dinner at The Palm & saw a show (The Lion King - very cool costumes!).  Walked around afterwards on the strip, watched the fountains at Bellagio for a while.  Vegas is in the middle of a heat wave, and it was still over 100F at 11PM!! 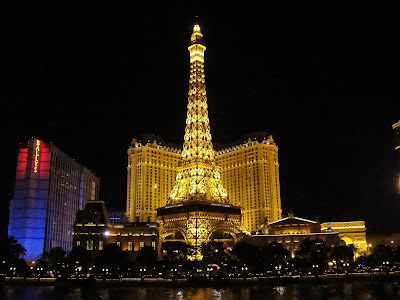 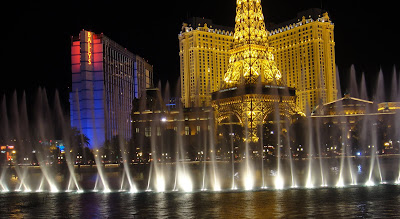 Dancing fountains in front of the Bellagio 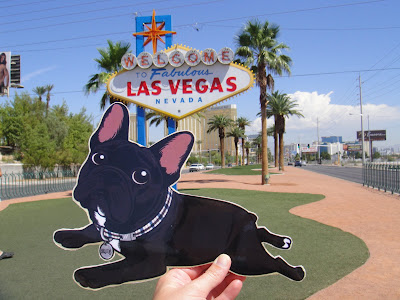 Been to Vegas a dozen times, but I still couldn't resist the photo op for Flat Brutus in front of the famous sign!
Just before we left, there was an unusual bit of excitement back at the house.  We had been hearing helicopters overhead, and saw all kinds of news trucks parked across the street.  Turns out that Michael Jackson's doctor (the one who'd been giving him with propofol) lives in the development next door, and his house was being raided!!  Got a few pics of the news crews & paparazzi, couldn't resist including that here!  Gee, too bad I didn't have Flat Brutus along - maybe he could have made the national news: "Crazy lady with cutout dog demands air time" at eleven ... 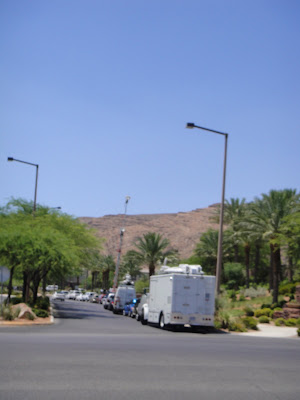 Every local news crew was there to film, even CNN was on site. 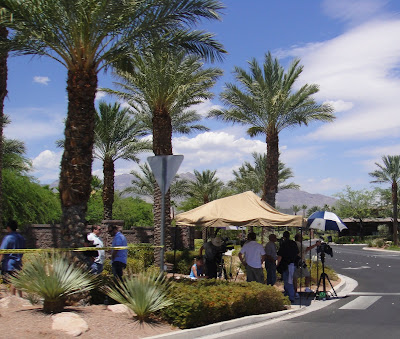 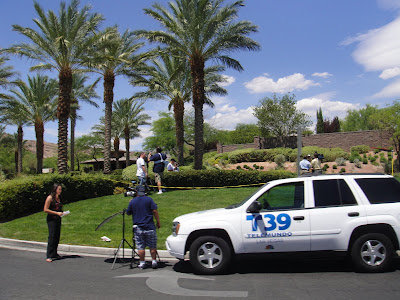 Reporting live from the scene...
Time to head for the airport.  As a last-minute surprise Paul upgraded us to first class for the flight home, so for once I'm looking forward to the trip (I hate to fly).  Never been so excited to get home - can't wait to pick up the boys in the morning!!
Posted by BRUTUS at 9:43 PM

I'm so glad you are coming home! Can the wee Brute play tag with me? Asta-lishcious tagged me and I've never played tag before! Here are the rules of the game:

Wow, that looks like a cool place to visit. Mom wants to go there very much. I bet Brutus will be so happy to see you.

How exciting. Las Vagas, huh? That place is INSANE! Momma wishes she could go there to see the R rated Cirque de Sole (bad momma).

She also wants to see Tom Jones because she is like 587 years old and thinks he is cool. Ugh.

Woo have ALL the fun!

I khan't wait to see what Brutus has to woof at woo!

Wow, what an exciting trip! Happy anniversary btw. I love the picture of the fountains outside Bellagio. When I went to Vegas I only saw them in the daytime. Just couldn't fit it into my nighttime schedule lol. Have a safe trip home.

Happy anniversary!
What an exciting end to your perfect vacation!

HaPpY AnNiVeRsArY! I bet you will be glad to get home but will Brutus be ready to leave the "spa"? BOL It's great you got a pic of Flat Brutus in front of the famous sign!

Wow, what an exciting time! Don't envy that heat, tho'...good thing the real Brutus wasn't along, I know he doesn't do well in that.
Happy belated Anniversary to Brutus' parents :-)
Your pal,
Sedona

Vegas is great only been there once but it was awesome - love the brutus pic in front of the vegas sign - too cute - but you should have let him out for the paprazzi he could have been famous ;)