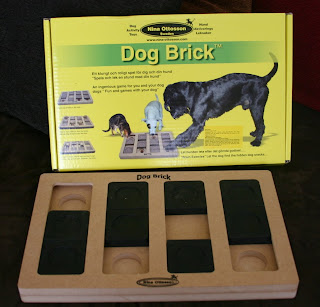 One of Brutus' presents was a "dog puzzle" made by a company in Sweden.  They make quite a few different puzzles, all of which reward the dog with a hidden treat when then "solve" the puzzle by moving/sliding/turning/flipping various parts.  Some of the einstein-doggie level puzzles require several maneuvers before the dog can get to the treat.  I got Brutus the "Dog Brick", the simplest one.  It has 8 holes which can be covered 8 sliding blocks around in four parallel tracks. 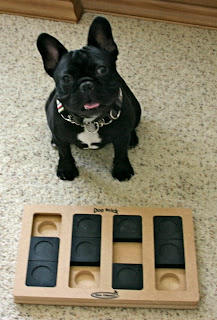 I'm really getting a kick out of watching Brutus learn how to find the hidden treats, using is nose to locate them then either nosing open or sliding the covers with his paws.  So far we are only hiding one treat, always in the same hole, and he gets to watch me put it in.  The idea is to eventually hide several treats while out of sight, then let the dog use what they've learned to find & access the hidden goodie.  I have included some still photos, as well as a video so that you can appreciate Brutus' efforts! 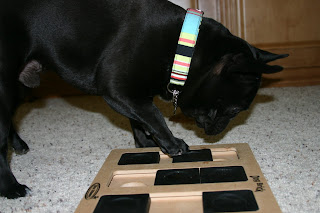 If you are interested in finding out more about the dog puzzles, visit Nina Ottosson (it's a Swedish company) or Paw-Lickers Bakery & Boutique, where we purchased ours.
Here's the video, accompanied by my commentary!
Posted by BRUTUS at 5:35 PM

Thanks so much for showing this. My mom person says she is going to buy me one right away.

I can't play with stuffed toys anymore, it eat out the stuffins & then I have to go to the V-E-T & get the stuffins out of my guts...it's not fun!

You sure are a quick study, Brutus! Either that, or simply treat-obsessed, comme moi :-)
I gotta get me one of those contraptions!
Your pal,
Sedona

My Mom was wondering about this yesterday. You did a good job Brutus, however wouldn't it just be simpler to have your Mom just give you the treat. I don't get these Swedes, it seems like a sick game to torment us innocent puppies. I am going to delete the information from my Mom licks and sniffs, Sasha

I am sorry for Sasha, she doesn't understand that it is a learning game and I am going to check into one for her, but don't tell her.

We need one of those games.

What a good job Brutus - we have several games like that in our house - we love playing them - Sweetie and I dont play with our brick much anymore - but MJ is still playing with it, he is a pup and is still learning.

What a clever wee fellow you are Brutus! Have fun with your new pressie. woofy kisses and butt sniffys...Bonnie

HaPpY BiRtHdAy to you!

You are one smart doggy!!