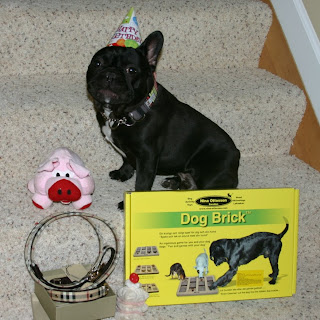 Wow - first time I've ever posted twice in one day.  One's first birthday is a big deal, though, so one post could never do it justice!  (For anyone out there that might be wondering - yes, I do need help LOL!)
Brutus had a pretty great day by any dog's standards.  A nice walk, lots of play time with mom & Mason, special dog-appropriate cake & (I saved the best for last) PRESENTS!!  A few stuffies (like he needs more....), a VERY nice collar & leash (from Paul/dad) and a "Dog Brick" puzzle.  Not pictured above is an awesome drawing of Brutus I had commissioned, still awaiting a digital copy to include on the blog - but I assure you it is amazing!
As far as the cake goes, it was a carrot/peanut butter recipe I found on the internet.  Duncan & Mason liked it much better than Brutus did - at least it made it worth their while to wear the paper hats!  Brutus was very interested during the preparation/cooking stage, but was only really into the frosting (cream cheese with bacon bits). Unfortunately, I think he liked the stuffie "cake" better! 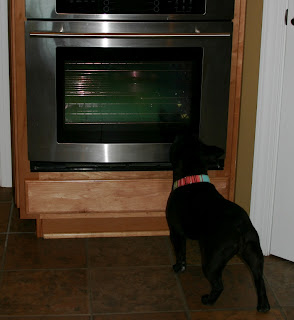 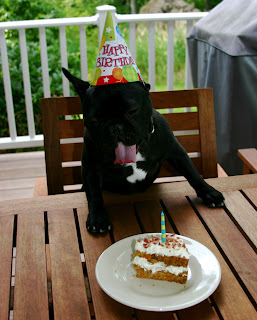 I know it's my birthday, but *yawn* more pictures? 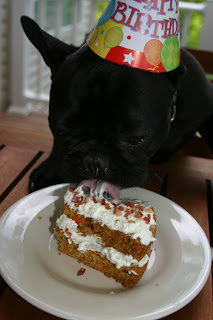 Mmmmmm...  Bacon.....
Some of you inquired about the rest of the pack, shown in yesterday's group photo.  I did introduce them in an older post ("The Pack"), but I'll briefly reacquaint everyone with the senior members of our family, especially since they had to put up with me tormenting them again with the paper hats!
DUNCAN 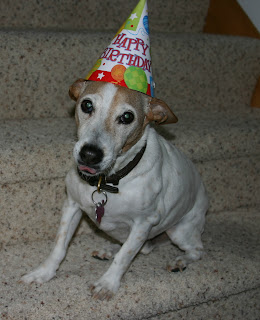 My original sidekick, a Jack Russel terrier.  Duncan is our geriatric dog - almost 17 years old!   He's at least as fiesty as ever (when he's awake), and is the object of endless harassing from Brutus.  Good thing he's 90% deaf,  so at least he doesn't have to put up with all the Frenchie noises....  He sleeps 23 hours a day, and his favorite thing is to curl up next to me under the covers every night.
MASON 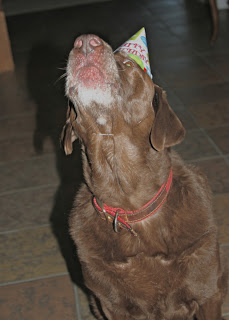 Shown here rounding out the final chorus of "Happy Birthday, dear Brutus, happy birthday to yooooooooooooou..."  Mason is an 11-year old chocolate lab that quietly rules the roost.  He puts up with (and maybe even enjoys) hours of tormenting from Brutus.  He is the apple of Paul's eye, and is the most easy-going, low-maintinence dog (well, except for all those allergies...) you'll ever meet.
Posted by BRUTUS at 7:39 PM

I am having my mom person immediately look up bacon frosting!

hello brutus its dennis the vizsla dog hay woo hoo yoo guys no how to party at yore howse i am mooving in immedyatly!!! say wot kind of furnitcher doo yoo hav is it tasty??? thanks ok bye

Nice to meet your siblings, Brutus!
Wow, all that hard work by your human to make that cake and you only licked the frosting?! I would've made that slice disappear in seconds flat :-)
Have fun with your doggy puzzle, it looks like fun!
Oh, I haven't gotten by CGC yet; the puppy version is a modified version of that.
Your pal,
Sedona

Wow did you get cool presents! Please tell your MOm that there are never enough stuffies for us. The cake sounds good, maybe you were too excited about the party to be hungry for cake. I am glad you had so much fun.

How nice to meet your pack!! We especially like Mason because he reminds us of Java who will be 12 on Saturday.

what great pressies you got - happy birthday little man

I WISH I WOULD HAVE WORN A HAT TOO FOR WOO.. HAPPY BARKDAY MR. BRUTUS

WOO ARE SUUUUUUUUPER CUTES.. I SAW A PUP THAT LOOKED SIMILAR TO WOO AT DOGGY BEACH THIS LAST WEEK ENDS... BUT WOO ARE MUCH MORE HANDSOME!!