All the hot weather here has given me an excuse to get caught up on some housekeeping.  With three dogs, that all shed, different colors - I'm almost instantly behind even when I do catch up! Mason sheds the most (he can put a Furminator to shame), both longish brown hairs and lots of fluffy white undercoat.  Duncan does his part too, with hundreds of needle-like white hairs (my mom actually got one stuck in her foot once - had to pull it out like a sliver!).  Brutus sheds the least, but he is sort of "molting" out his puppy coat right now, so contributing more than usual.
Thankfully I have lots of dark-colored ceramic tile that hides dog hair pretty well; it can easily be swept with a broom, producing lots of "fur tumbleweeds."   I do have carpet in some of the downstairs rooms, which never ceases to need vacuuming.  Don't know where I'd be (probably up to my eyeballs in dog hair) without my Dyson "Animal," which has probably sucked up 100's of dogs worth of hair over the last 5 years and is still going strong!  I love it, but oddly Brutus doesn't have quite the same appreciation for the Dyson as I do.  Every time I bring the vacuum out, it's "Game on" before I even plug it in!
So when I vacuum, I "exercise" three things - the carpet, my right arm, and Brutus!! His behavior with the vacuum can be much better, but only if I carry around a squirt gun with me to discourage Brutus from attacking the vacuum.  He still chases it around & tries to ambush it whenever possible.  I can only vacuum a few rooms at a time, or I think Brutus might pass out from all the excitement. God forbid I get out the hose attachments...
Part one is all still pictures, just with the main vacuum.  I'll move on to part 2 next week, with includes the hose attachments & a video.   For now, I present the newest extreme sport: Vacuum Wrangling! 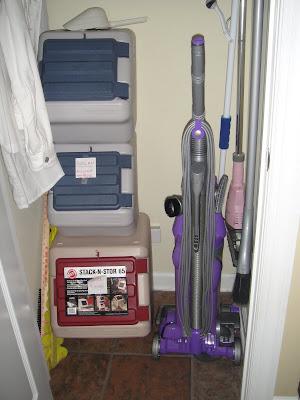 The beast resting in it's lair.
(It guards the dog food bins from any self-servers that might wander by) 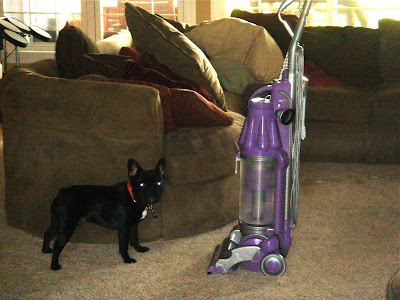 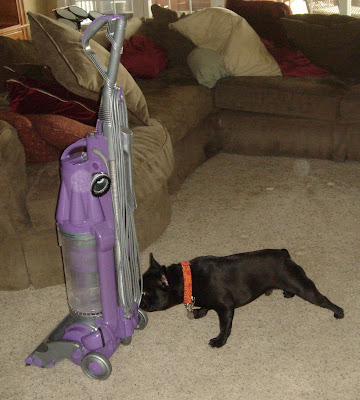 Come on Dyson - bring it on (notice it's not even plugged in yet...) 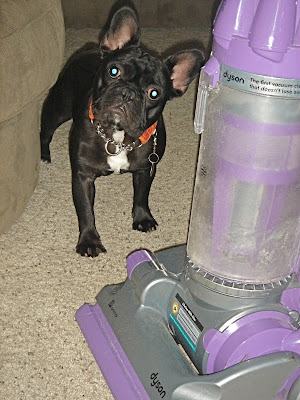 Hey mom, can you wake Dyson up so we can settle this? 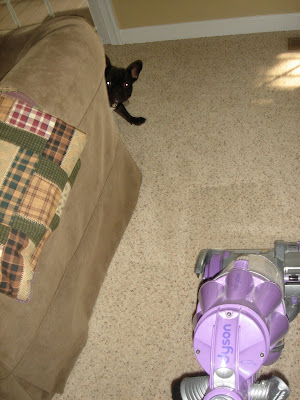 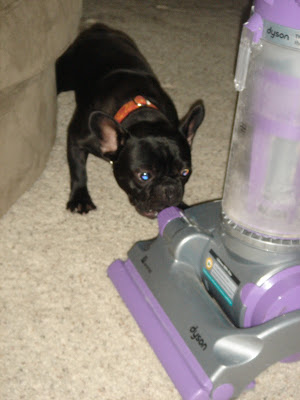 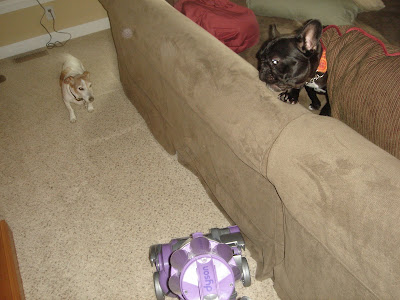 Sniper.
Duncan was actually quite the vacuum attacker in his prime! 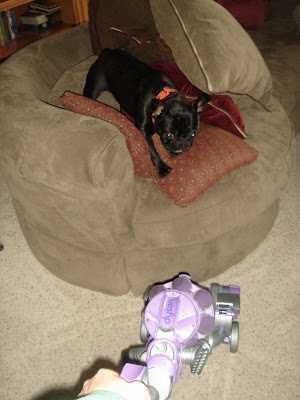 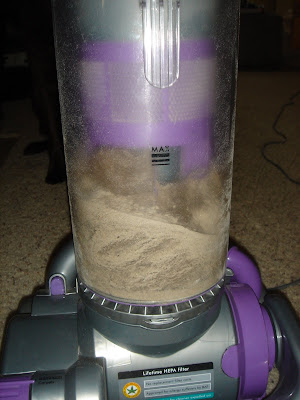 can you believe that mum calls me her vacuum cleaner as i loooove licking the floor....
chikisses

We love ya Brutus. Bite Dyson and run. Tell mom...it's a lie whoever said frenchies are "medium" shedders,we shed a lot. We could make wigs. Mom vaccums so much, I ignore it, but Lily bites it just like you.
Benny & Lily

Pack attacking...works best! One of you circle around behind and the other lead it away. Then..KABOOM...you got it! We used to attack our vac and the swiffer vac regularly. Then SHE watched the Dog Whis-pee-er and saw an episode about a pair of those collie dogs and a vac. She has been able to claim the vac space and the swiffer when it's actully running, but not the swiffer if she uses it as a broom...or the actual broom. I am still the champion broom attacker and I can rip that little cover thingy off the swiffer in a NY minute. It's good to see everyone getting some inside exercise though, it's way too hot to go outside and exert that much energy.
Bonnie

Nice! With that kind of review I might have to get one if I ever have carpet again LOL! Poor Brutus. Can't believe he lost. :)

Of khourse I believe it!

But then again, I am Siberian, watch me shed and floof!

I shed a lot too!
I think our moms need to take up knitting!

Yeah. We believe it. Momma usually has to empty it a couple of times when she does the dog cave.

Pee-Wee likes to attack our vac and it makes momma say HBO words (hee hee). Me? I just try to lie down in the most inconvenient place possible and wait until momma nudges me with the vac. Then I say my own HBO words.

I think I need to purchase one of those Dysons. The amount of hair it picks up is amazing. Loved the pictures. :)

hey Brutus! that's a lovely purple dyson. hee hee! you are quite the attack dog. we have never seen a show down with a dyson before. it's beastly!

tell your mom to get some poodles - we don't shed. she could throw the dyson away and have more time for the dog park! hee hee!

We don't have a Dyson, we have a Bissell. I don't think it works as hard as your Dyson, but mom isn't complaining. I ignore Bissell but Banjo runs to hide cause he is afraid of it. BOL

BOL! we just got a new vacuum cleaner and I like it even less than the older one! i run away from it, but when it stops screaming, I put on a stealth attack!

You're going to get him one day, Brutus!

We are scared of the vacuum but the pug that came before us would fight it like you! Good job! And mom is happy that she's not the only one who can fill a Dyson with one room...

Oh yes I can believe that's all from one room! I vaccuum up an entire dog each time I vaccuum.

Ooh that hose attachment gets me going every time. I warm up with the dustbuster, so I stay in shape.

Hi, Brutus!
We don't have a Dyson either! We have an orange monster that scares me a lot! I am not as brave as you!
Kisses and hugs
Lorenza

We use to fight with the vacuum machine at our house all the time but now we just let it do its business. We like to run around really fast and get our toys outta the way so the machine doesn't eat them tho! Good luck next time Brutus you can beat that old Dyson we know you can! Lots of licks--- Oak and Swish

Go Brutus go!! Attack. I love your methods, sneak up from the side of the couch and the double teaming is good also. Mom does not have a dyson and luckily I hardly shed at all. Please for the love of all that is holy, don't send the dyson to us.

Mitch avoids the vacuum but I attack it if it comes within my reach! I used to go after it like you do, Brutus, but now that I'm a Senior mom says that I act more civilized! What a dumb thing to say, don't you think?!