It was a pretty peaceful weekend here.  After the weird weather moved through Saturday, mother nature served up some of her best Midwest August; 90F and humid. Yuck!!  We took this as a great excuse to have a lazy Sunday morning inside, I even cooked breakfast.
We're really good about not giving the Brute any "people food", but that doesn't mean he doesn't try to change our minds.  In fact, one of the only times Brutus shows any interest in Paul (my husband) is when he is eating. It's not that he doesn't like Paul, he just completely ignores him 98% of the time!
Here's a few photos of Brutus (& Paul, back for his 2nd appearance on the blog) hanging out in & around the kitchen. 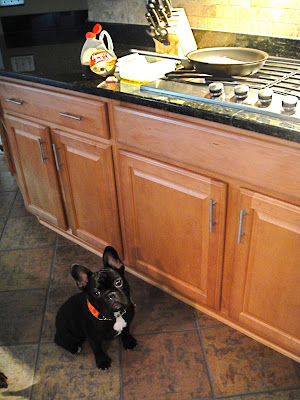 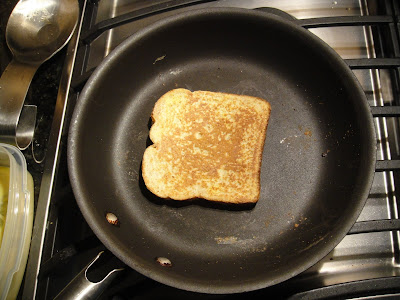 Did you say French toast?
Making it for your darling Frenchie, right? 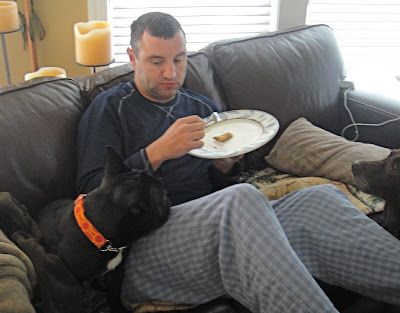 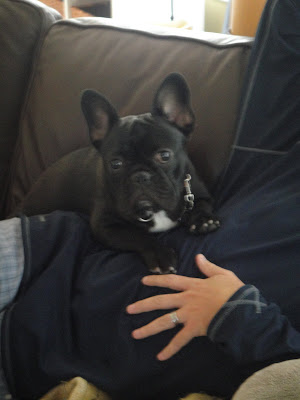 Dang it, didn't get a single lick!
Guess I'll just try to butter him up for next time - hang out on the couch with him a little so he thinks we're bonding (hehehehe).
Posted by BRUTUS at 12:49 AM

It's good of you to keep Brutus away from the people food. It must be tough. That challenge in our household has failed on an epic level.

It's okay for Marge, though, because she doesn't have any allergies or underlying conditions or anything. So we are able to use some human food for training classes and such.

I agree with the wee Brute, if it was plain toast he'd understand but come on....it was FRENCH toast! I don't get much people food either, except that which I can scarf off the floor or steal. Sometimes they give me a teensie bit of raw carrots or wally-melon. Or brock-lee and caw-lee-flower. I'd druther have steak or chicken wings. And I don't care how much Scottish is in front of Terrier, I ain't eatin' no haggis. Now, deep fried pizza is another story!
Pizza

I know just how ya feel dude!
Whenever there is Sam Adams lager, baked beans or Boston creme pie around the house and I don't get any, I sulk all day long!

It does seem unfair that you didn't get any of the "French" toast, Brutus. Better luck with the "French" fries!

Ha! We don't even bother to beg from momma because she is a big meanie, but sad face almost always works with the master (especially when momma isn't around to say, "don't give that to the dogs!" as if).

Mom is furry diligent about not letting me have human food whilst she eats...

But when she's done, I might get a morsel or two of khanine furiendly items (veggies/etc)!

T'was very mean of your mom to fix French toast then not give you even one bite! These hoomans... geesh!!

Not to brag or anything but we sometimes get scrambled eggs and turkey bacon on the weekend. You should come stay with us! BOL

Bonding is good!! It softens them up for the next time. I do it to the daddy all the time. The momma just shakes her head and removes me from the couch. But the daddy almost always caves =)

Dude, no French Toast? We don't get people food very often either, so we can sympathize. The bonding will soften 'em up.

It's all about the eyes, Brutus! Practice looking in the mirror! You gotta get the starving puppy look down perfectly! It works every time for us!

Never knew you were the scheming type!

Hi, Brutus!
When my grandma is in the kitchen I sit right beside her hoping to get something... like you... I never have luck! But one day....
Kisses and hugs
Lorenza

French toast? Brutus the French Bulldog? I think the two go together like peanut butter and jelly!!!

Don't give up, Brutus!

You should snuggle up to your dad person more, when he doesn't have food. Then when he does have food food, he might be more inclined to share it.

Hello! It's FRENCH toast. Is he French?

Good of you to keep Brutus's health in mind by not feeding him people food. Lots of folks seem to do that and it's really not good for them.

Your hubby looks sleepy in his jammies, or maybe not to happy you're taking his photo while he's guarding his food. lol

Hoped over Animal Talk, my SIL's blog when I saw you were a fellow Ohioan.

Figured I should come say hi and invite you to visit my travel blog. We Ohioan's are sure having weird summer weather wise.

Sandy
Have a good day, and do swing by for a visit, the welcome mats always out.

hey Brutus.....nice of you to visit and thanks for the compliments as you're not too bad yourself......i loooove your face and the pic on your header.

you're also quite a flirt huh and i do like that.....yes, we could be great pals frenchie...
chikisses

Hi Bru, that baleful expression on your dad's face is *priceless*
What a good pup you are to not swipe that slice right off that plate (that'd be *my* M.O.).
Your pal,
Sedona