OK, so we are all NUTS here!  Buckeyes, that is! 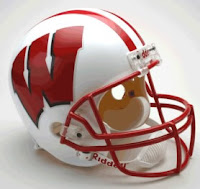 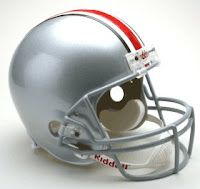 It's Friday again, and the Buckeyes are back at The Shoe!
The game this week has some special significance to those in our little corner of the DWB world!  It seems that Sasha's family shares our pack's addiction to college football, and are big Wisconsin fans. She's been taunting Brutus all fall (OK, we've taunted back too....), and now is our chance to prove that we have the better team! 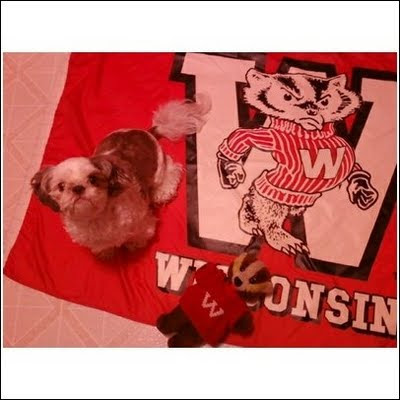 As you can see, Wisconsin has this funny-looking badger as a mascot, with the goofy name of "BuckY". Ironic, since the BuckEYES are going to dish out some serious punishment to his team this week!  We think he looks more like a squirrel anyways, certainly too small to be a badger....

We greatly prefer our Brutus the Buckeye, a MUCH more distinguished looking fellow: 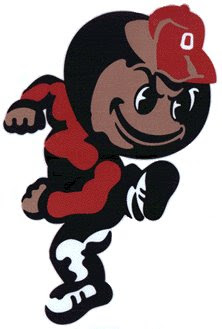 Since Sasha found it necessary to include a little less-than-complimentary info on our lovely state tree in her post, we feel obligated to tell the rest of that story!
This is s buckeye, the nut of the tree of the same name.  The buckeye tree takes its name from the fact that the Native Americans thought the nuts resembled the eye of a deer (that doesn't sound unflattering or common to us.  Hmm, Sasha.). Though poisonous to a small degree, buckeyes can be eaten if heated properly.  True, the leaves & bark have a pungent odor (not "disagreeable", Sasha) if crushed, but we think that just gives it character!! 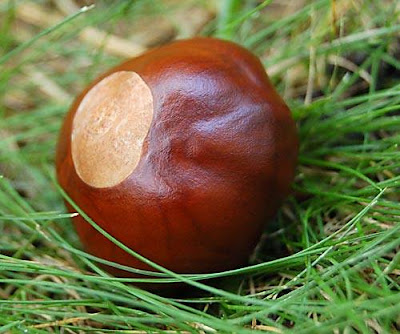 We will refrain from pointing out the numerous undesirable characteristics of a badger.  Ya know, just being the bigger dog & all...  Although the wikipedia entry for badger has one interesting fact that we can't ignore: the Native Americans (you know, the ones who named the Buckeye) considered the badger a main meat source. Interesting, methinks.
So Sasha, bring on your Badgers - the Buckeyes are ready!  Now, show us your best game face! 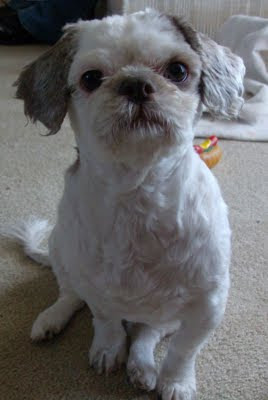 Is that the best you can do, girl?  It just must be hard to put on a serious game-face when you are cute & fluffy...
Now HERE'S a real game face: 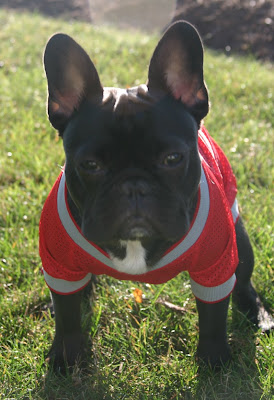 You are in our house this weekend, so don't underestimate the power of the Buckeyes!
Oh, and one last thing - we are the Ohio STATE Buckeyes, not the Ohio Buckeyes.  Get it right there, sassy opponent!!
And yes Oskar, Brutus is stinky (we do read everyone else's comments too, LOL)  - but we just think that gives him character!!

Very nicely done my friend. I do know that it is the Ohio State Buckeyes but thank you for pointing that out. Everything we printed was factual and obtained on the web. I can't help it if your mascot is a stinky nut(giggle).That is quite a game face Brutus, my handsome friend. Mommy hopes that our band is there and also that they do the jump around. We will be watching and hope it is a good game in our favor(wink)
You know I love you Brutus, all in good fun.

PhotoShop? Huh? Those are ACTUAL PHOTOS, my good man.

Brutus, you definitely have the more fierce "gameface" look! Hope your team wins!

We know diddly about college football since Michael Vick broke our heart years ago and we stopped watching it, but we do like that game-face - that's a classic photo.

The Brute does definitely have a good game face!!

Ut oh...Sasha rivals? By the looks of you Brutus, you are ready for anything. You sure look handsome in your tee
Benny & Lily

Brutus,
You do look kinda tuff in that picture.
Sally Ann

Which nut are we to fear?

There are so many to choose from!

Sheesh, Brutus! When you've got your game face on, I don't think ANYONE would mess with you!

P.S. Hope the melatonin went well. I know how hit-or-miss supplements like that can be, so I hope it was a hit!

I think the Buckeye is adorable! Now I can tell Walter He's cute as a Buckeye!

Has me scared!! Remind me not to get on your bad side!!

We are pretty sure that badgers would also have a "pungent" odor if crushed! BOL!!!!!!!!

Also... peanut butter buckeyes are DELICIOUS and I don't know of any candies named after BADGERS.... typical.

What a DWB rivalry we have brewing here!! May the best team win!!

Why is that little cartoon coffee bean so angry? ;-)

We LOVE your game face, Brutus! You look so tough!

Brutus, that is a very serious game face, but I have the biggest crush on Sasha...*sigh*