Today Brutus & I were out enjoying a cool, yet sunny fall afternoon.  We found another sure sign of the approaching winter: a woollybear caterpillar. 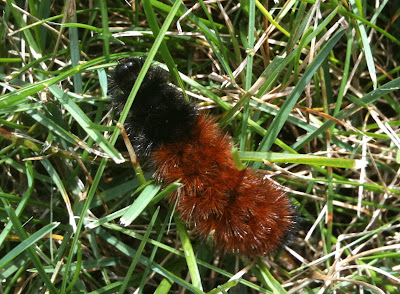 These little guys live throughout the country (it is the immature form of the Tiger Moth), but folks around here make a big deal out of them when they appear each fall.  There is even a "Woollybear Festival" in Vermillion, OH - something I have many fond childhood memories of (they even have a WoollyBear 5000 - where people bring caterpillars to enter in a race). Legend has it that these little guys can predict the severity of the approaching winter:  the wider the orange band, the milder the weather will be.
I always feel like a kid again when I see a woollybear, I have an overwhelming urge to stop and play with them.  Even if you aren't a bug-lover (I'm not), they are very nonthreatening, soft & fuzzy, and fun to play with. Unfortunately for this caterpillar, that meant that Brutus got to stop and play too! 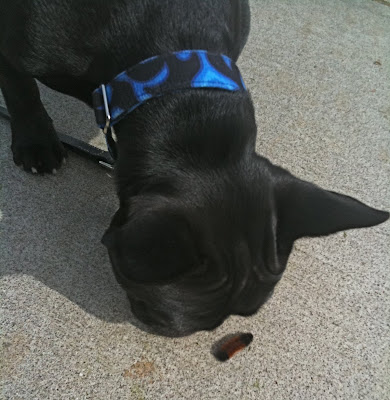 When threatened, the caterpillar rolls itself up into a little ball and plays dead: 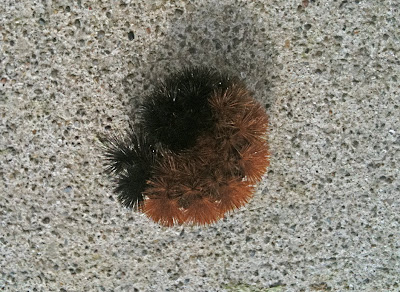 Not suprisingly, being snorted on by a Frenchie is threatening, because that's just what happened! 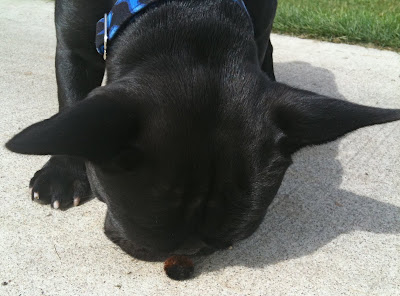 This was an excellent strategy to use with The Brute, as he lost interest when it stopped moving (refer to the carnage in our "Great Ant Hunter" post as a comparison). 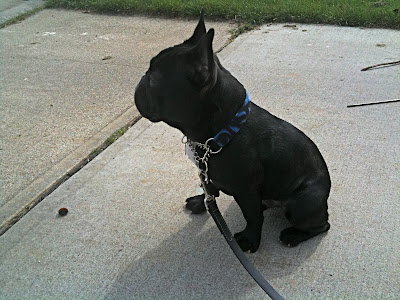 Then, when the little guy thought the coast was clear, he made a break for it! 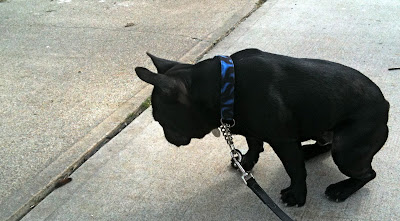 Not much gets buy Brutus, so he was back in the chase after a few moments.  But this was a caterpillar with a strategy, and not to be outwitted by his predator. 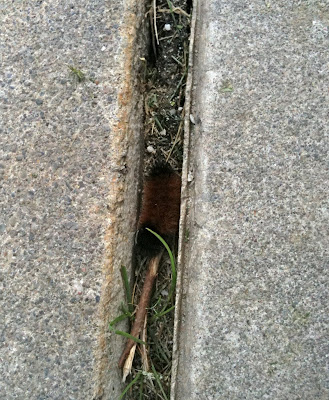 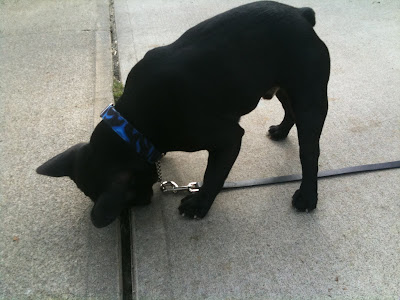 He crawled in the crack between the sidewalk sections!  What a smart little worm this woolly was!!  Try as he might, Brutus couldn't get him to come back out and play! 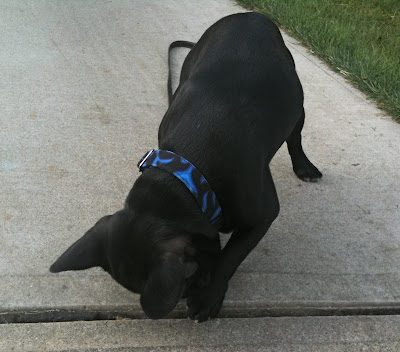 I guess that when they say "survival of the fittest", brains count for something too!  This was one caterpillar that refused to become another french bulldog victim! 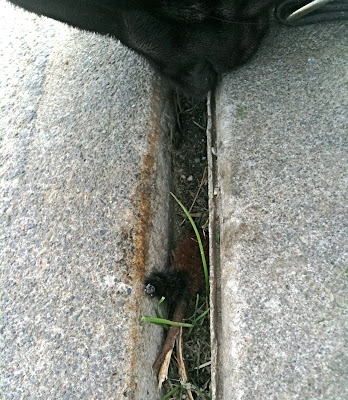 That's Brutus' confused face smushed into the crack at the top of the picture, as the clever woollybear makes his getaway unscathed!
Woollybear 1, Brutus 0.
Posted by BRUTUS at 12:05 AM

I have to admit, caterpillars freak me out! I used to love them when I was younger, but the other day my mom brought home some fresh picked corn (not sure where the heck she got it from) and there was a giant, fat green caterpillar crawling outside the bag. Eeek!

BTW, love that collar. Looks so nice against his coat.

Awww, Brutus and Michelle, this post MADE my day! It is so sweet!

I don't think I've ever seen a wollybear caterpillar before. I wonder if they show up in east central IL.

Maybe I'll have to give a go now!

I hope this caterpillar's prediction is correct! I would love to have a mild winter, or none at all. :)

Brutus,
Strange little creatures huh?? I would be like you and still trying to get him between the cracks. My mom hopes we have a mild winter here in IL. She hates the cold but I love the snow!!

You do look snazzy in your blue collar!! Good color for you

Hi Brutus,
This is Sally Ann. It is nice to meet you.
Sally Ann

Hmm... Out-smarted by a caterpillar, huh? Well, I'm not one to judge... ;-) BTW, was that a wide orange band or not? I want to know if I can expect a lot of snow! (Or do they just predict weather regionally?)

Brutus, sorry you didn't get your snack. That was a kind of smart guy to crawl in the crack like that. You look so cute.

We are seeing a lot of woollybears at our house too, Brutus! We had no idea that he was the immature tiger moth! You taught us something today! Thank you!

We have to tell you that the last woolyworm we saw was totally black - sounds like we'll have a hard winter.

That caty pillar must have been really fast, huh? Otherwise I am sure you would have caught it before it went into its safe place.

hey Brutus, tq for showing me my first woollybear.....and a smart one too.

thanks for your kind words and SEng was indeed special......

Awesome story of a determined caterpillar and mostly determined Brutus!!

Thank you!...That was fascinating! I am a bit of a bug-lover (from afar), but I wanted to tell you that our 'Woolly caterpillars' here cannot be touched! You will be itching for weeks if you touch them - that is their defence. I am surprised that yours don't have that defence strategy.
I found your orange band theory facinating...
A really lovely post!
Licks to Brutus

Sorry the woollybear wouldn't play with you. I guess he didn't want to get smushed! BOL

It's just like when the Rebels attacked the Death Star by flying into that little canyon section! Starring Brutus as Darth Vader!

Ok, so Brutus is adorable and all, but I'm glad the woollybear got away!

So determined, and with a happy ending for the woollybear!

Toys that can run and hide from us are not as fun are they? Mom loves your collar, it makes you look extra handsome.

Very cool post, Brutus! I love learning new things. Those caterpillars look a little scary, but thanks to you I now know they're harmless.
Your pal,
Sedona

Oh Brutus, I'm sure you'll outsmart him on your next encounter!

Mom hasn't seen one of these little guys since she moved to Arizona so she thanks you for the wooly memory.

Cool caterpilliar - but poor brute being ot witted by a bug!! - he was just being nice and letting it get away!!