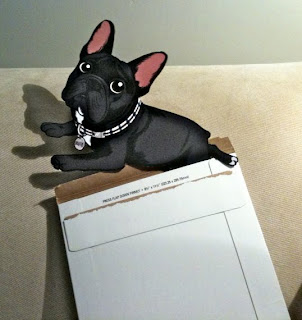 It's been a busy first few weeks on the World Tour for Flat Brutus - he's really getting around! He's seen so many things that I can't get it all in one post, so I'm splitting this update into two halves. The first will be about our non-blogging friends who have been hosting lately both here in the US and abroad. Then tomorrow I'll do part 2 about the fun Flat Brutus had while visiting our DWB buddies.
Flat Brutus' first international host was our friend Arlette and her two Frenchies, Rufus & Lilly. 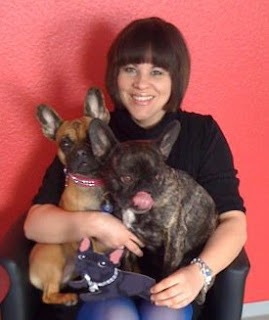 They are live in Cologne, Germany. Flat Brutus followed Arlette everywhere (to Rufi & Lilly's dismay!) - she took him to work, the salon, a cafe, and of course to see some of the local sites. Here's Flat Brutus lounging on the Rhine River. In the background is the Hohenzollern bridge and the Cologne Cathedral 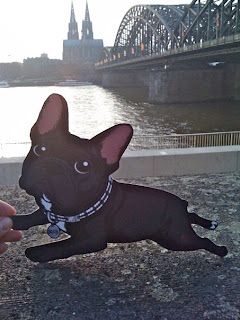 As if that wasn't exotic enough, Flat Brutus got to accompany Arlette and her mom on their trip to Istanbul, Turkey! 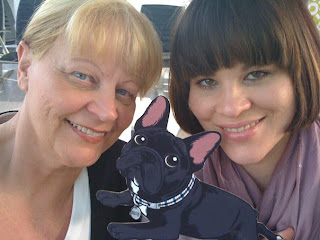 He got to go for a ride on the Bosporus Sea, 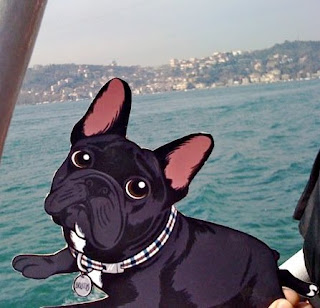 and even saw the Blue Mosque (sorry for the small photo, that's as big as I could get it for some reason....).

After all that travelling, Flat Brutus and headed back to Cologne to relax for a few days with Rufi & Lilly before saying goodbye. 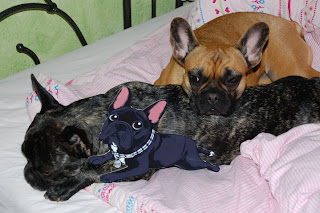 Now Flat Brutus is really traveling - his next host (Sarah-Jane) has him on another whirlwind tour of western Europe, this time to no fewer than 4 countries! At this rate, he's going to need to add a few pages to his passport!! 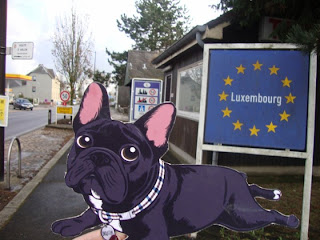 Meanwhile, back on US soil....
Flat Brutus has been hanging out in Pittsburgh. Our friend Nathaniel was so happy to host him that he and his Frenchie, Biwa, had a feast planned to celebrate his arrival! Talk about a warm welcome!! 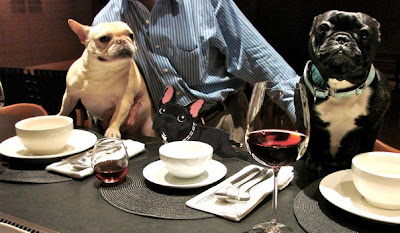 The other Frenchie in the photo is Pancko, who came over to celebrate with FB & Biwa. He & his mom (Lissa) also helped show Flat Brutus around the city. The next day they took him to the park for a romp in the beautiful spring weather. 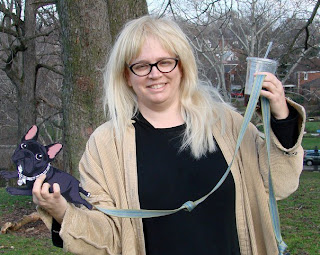 Then they headed back home for a little couch-potato time. Nothing like being offered a nylabone and a little butt-sniff from hostess Biwa to make you feel like an honored guest!! 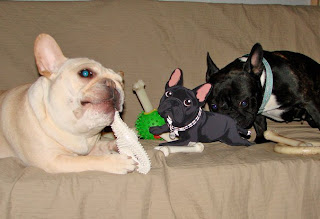 They turned in early that night, as Biwa needed her beauty rest. The next two days Flat Brutus got to attend his first AKC event, the Western Pennsylvania Kennel Club show! Unfortunately, Flat Brutus missed the entry deadline and couldn't compete (plus he's a little small for breed standards....). Biwa, however had a most impressive showing weekend, winning both days! 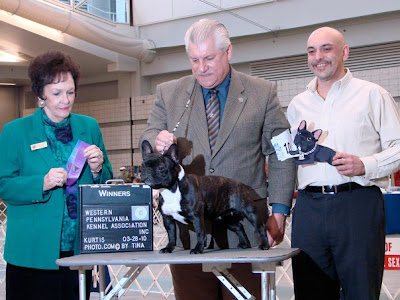 Flat Brutus was most honored to be able to appear in the win photo! Nathaniel had to hold onto him, since he was so excited he looks like he would have lept right onto the table to hug Biwa!!! A little side note, Biwa was bred by our friend (and vet) Dr. Lori, who is next on his hosting list. I'm not going to let any proverbial cats (or Frenchies for that matter) out of the bag, but you'll be seeing a lot more of Lori and as well as her gang of Frenchies at her Assisi kennel soon... 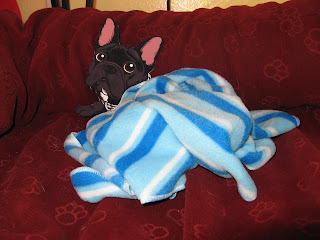 So after all that excitement, Flat Brutus was happy to have a few days to rest. He'll be heading back to Ohio briefly then on to lots of other exciting places. Thanks to all our great hosts for showing Flat Brutus such a good time. There have already been some wonderful donations made to FBRN, so an even bigger THANKS for that!!
Be sure to come back tomorrow to see all the fun that he's been having with our blogging pals, you'll be sure to see lots of familiar faces!
Posted by BRUTUS at 11:16 AM

Fantastic! Looking forward to tomorrow's post too. BTW GABE (Global Animal Blogging Event) starts tomorrow, you don't suppose FB will be stopping by here before the 20th of April, do you?
Twinkie

What a grand adventure and great pals you have Brutus!

What a great Flat Brutus update! He's taking over the world!!

Whew...I am tired from watching all that Flat Brutus action!!

He had a mild visit with us compared to all of that excitement!! Go Flat Brutus!!!

Wow, Flat Brutus is getting to see the most exotic places. I want to know why these wonderful Frenchies don't have blogs of their own?!

pee es, Mom ordered you a tag to wear with our names on it, but it turned out crappy. She's bummed. Back to the drawing board.

Mom says she is green with envy over all Flat Brutus' trips!

That cat in the bag... Brutus isn't getting a little brother or sister, is he?

OH! I luv, luv, luv reading all abouts FB's Most Worldly adventures! I'm gonna have to make mom show me on a map where all these places are. But something tells me they're far, far away from Collie-rado.

Also, I'm very glad those instructions helped you be able to see my bloggie!

Wow, Flat Brutus must be very tired by now!! I hope he's getting some time to rest and recover from jet leg (mail lag?) I love hearing all of his adventures!

Flatty sure is getting around! Great pictures! Don't forget to drop in, I'm having a give-a-way for GABE!
xxoo
Deborah
PS. We can't wait for Flatty to join us!

Oh Brutus you are an international celebrity! friends in Germany must think Americans have funny doggys
Benny & Lily

how cool! he sure gets around. Can't wait till he gets here :) Stop by and leave a comment some time! We would love to hear from you

Flat Brutus is making the rounds faster than juicy gossip!!

The Winner's Bitch photo is just priceless! What publicity -- LOL! And it's for a good cause, too!

I can't wait for the second installment of Flat Brutus' adventure!

WOW! Flat Brutus is REALLY making the rounds! Good for him! (AND FBRN!)

I'm feeling a little jealous of Flat Brutus. He's having so much fun!! Thanks for the update, it made us very happy looking at all the photos :)

We are sooo jealous! You got to go to Germany? No fair! Butt, no one deserves it more then you!

Wow, your Flat Brutus experiment has really taken off in a big way and you must be so proud and excited about it everyday! How incredible that Flat Brutus has been such a world traveler! I'm sure the real Brutus is a bit jealous, don't you think?
Reading your blog is one of the first things I do each morning! Really...it's true!

Wow FB you have been busy!

wow! what a fantastic trip! no wonder flat brutus is so tired. how exciting to see all of the sights. he is definitely an ambassador for frenchies!
hugs,
puglette
:o)

wow those brutus's are having a blast, I can't believe he made it into the winning photo. I can't wait to meet flat brutus.

I LOVED the picture of flat Brutus in the winner's circle. Nice to see some doggie show people have a sense of humor.

Flat Brutus gets to have all the fun!
Can I come??

Loving these photos from your Flat Brutus - can't wait to see more!

Flat Brutus sure gets around! He must be supersonic!

The Brutus is funny... AND well travelled!

wif love from the Luke