Well, here we are again. Coming to you thanks to the wonders of mobile internet - this time from Grand Teton NP, just outside of Jackson, WY.  Here's the obligatory family photo: 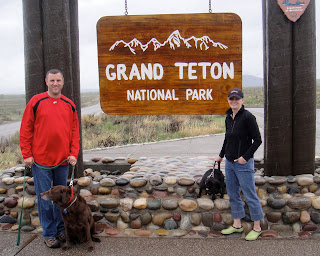 The weather out here has been less than lovely. Lots of grey skies, steady drizzle, and cold temps - in fact there is still a lot of snow in the upper elevations of the Rockies.  Average temperature has only been around 55F for a high, but we've had a few peeks of sunshine to inspire us! 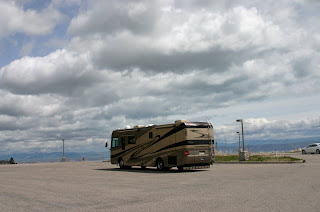 No wonder they call it "big sky country" out here!  It seems like the horizon just melts into the mountains.  Even Big Earl looks little!  Here's Brutus taking in the view at Bear Lake, Idaho. 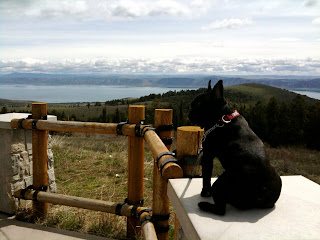 After a few nights at a family farm in Utah, Big Earl found an even more picturesque place to hang his hat: the Colter Bay of Jackson Lake, WY. 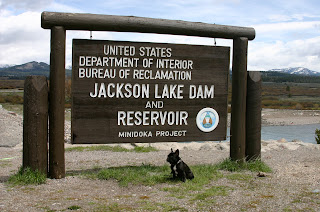 It's beautiful there, amongst the Lodgepole pine forests at the foot of the Grand Tetons.  That being said, it seems that there us a bit of a bear problem at there. 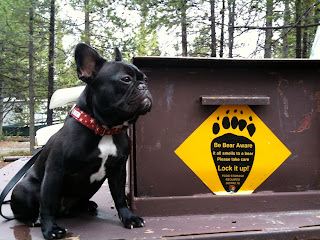 Not to fear, I've come equipped to protect the precious Brutus; bought him a can of "bear-b-gone" in case any get too close! 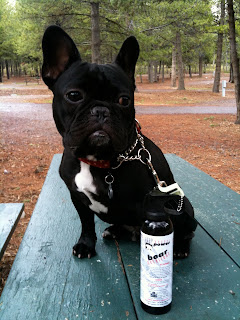 OK, so maybe I bought the bear spray for us too - there was bear poo (or "scat" as they say to sugarcoat it here) just a few steps from Big Earl's door (literally!!!).
After a good night's sleep they boys (both human and canine) & I headed out to explore the beauty of Colter Bay. 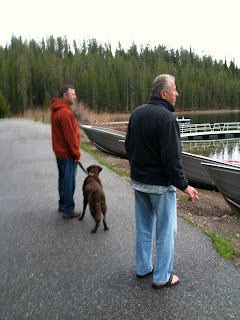 All sorts of things to do here, from hiking and rock climbing to boating and fishing. 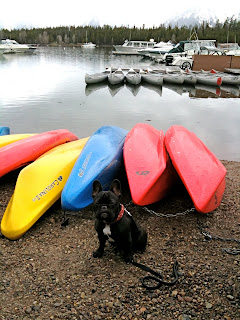 Good thing mom forgot to pack my life vest, or I'd be forced to go for a ride in one of these crazy floaty things!!
Brutus supervised while Paul and his dad did some fishing on the Snake River (that's Paul in waders in the background).  We enjoyed the scenery and had a fantastic close encounter with a beautiful Golden Eagle, but no nibbles on the lines. 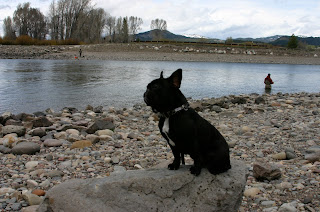 This big bird swooped just above Paul's head while he was fishing, then up to rest in a pine just 20 yards away.  Isn't he beautiful?? 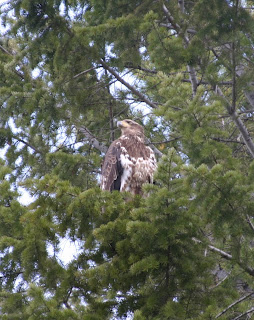 Here's the view from the other side of the dam - just breathtaking! 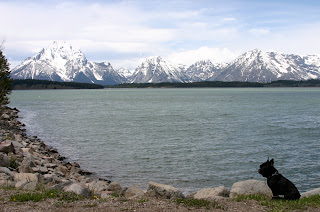 Even though the boys didn't catch any fish, it was still a great day.  Up to Yellowstone tomorrow.   For now, Brutus bids you a cheesy farewell for today!  See you tomorrow! 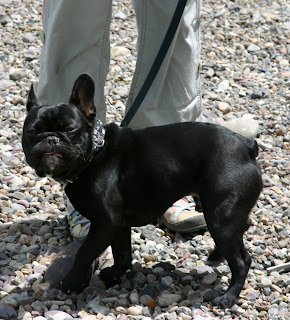 Jake and Fergi were just in The GT's and shared some pawesome pikhs too!

I am soooo furry jealous!

What beautiful sights you have seen! Thanks for sharing your nature photos. Wish we were there with you all!

For a little guy, Brutus is standing tall and proud at all those nice places! You're looking noble, Brutus!

Brutus! You got sprayed with bear-b-gone? Wonder what that smells like.

Oh oh Brutus watch out for those Eagles! I've heard terrible stories of them swooping down and taking little doggies away for lunch! Be careful my friend.

Your photos are amazing! What a wonderful place to visit...eagles, bears, and all!

Looks like you are having a Most Magnificent time even though it's a bit nippy. (I heard it's s'posed to start warming up this week.) Good thinking on the bear spray. You should wear a bell, too, to lets the bears know you're coming. We have a joke out here that goes, "How can you recognize bear scat? It smells like bear spray and has little bells in it." BOL!

I think it's neat that both the real Brutus and Flat Brutus are touring the west right now.

Yeah, um, Brutus, I think you might fall into the 'Eagle Snacks' category. You might want to see if your Mom can get you some 'Eagle-B-Gone' spray, too! Heehee!!

PeeEss: Why do most of your pictures look rainy? ;-)

Hey, Brutus and family. Been thinking about you and when I saw your comment today, I had to stop stalling. Apparently we're both busy these days... good :) What a fabulous road trip. We're dreaming of getting our own Big Earl to tour the US some day. Funny lines, great fun, cool photos of my friends and your obligatory ones aren't bad either ;)
xoxoxo
Twinkie
PS Could my mom borrow the waders? This way she can fend off the cat that is quite feral btw

What gorgeous photos, it must be just overwhelming! Thanks for being a great tour guide and thank dog the life vest got left behind.

Beautiful pictures.......especially the second to the last one...Brutus at the waters edge with the mountains in the background!

Thanks for sharing the pawsome photos...its a wonderful little break from our hot, humid days down here in Texas right now.

Be careful of all the wild aminals!!
Smileys & Snuggles!
Dory, Jacob and Bilbo

Man there is danger around every corner with the eagles and bears and boats. Convenient how the life vest was forgotten..
Don't you hate it when your lip gets hung under your lip like that?

In Alaska we call Bear B Gone steak seasoning... well thats something to explain after you are out of bear country

Wow you sure are visiting lots of neat places. Thanks for taking us on your big adventure.

Oh wow, what a beautiful mountain picture! When we were there several years ago, there was weather over the mountains and they were dark grey and menacing -- looked impressive in a different sort of way. Enjoy your travels, Brutus (and Mason) and stay away from them there bears!!

hello brutus its dennis the vizsla dog hay that luks like a grate trip!!! dada klayms he went to theez playses in 1975 or sumthing but i dont beleev those mowntins and layks cud hav eksisted that long ago they wood be all eroded away by now!!! ha ha ok bye

What awesome pictures, Brutus, and what a fantastic time you're having!

My people had a bear come & sit next to their tent while they were camping in the upper peninsula of Michigan once. They didn't hang their cooler from a tree, so the bear sat right next to the tent and ate all the food! My mom person said he was so close they could smell him. She also said she peed her pants a little!