So we last we left you we were in Nebraska, and Big Earl was resting comfortably in a nice RV park.  We all got a good nights' sleep, and were ready to head back out onto the open road early the next morning.  But not before I had a chance to get a couple of quick photos at a nearby tourist trap!
After checking out this stagecoach, Brutus really appreciates all the traveling comforts of Big Earl. 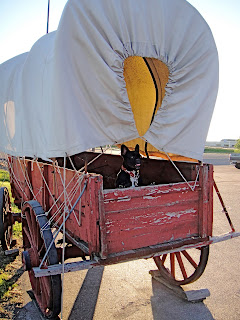 Brutus also met his first "bison".   As you can tell by the photo, he wasn't too sure he was ready to meet any more wildlife. 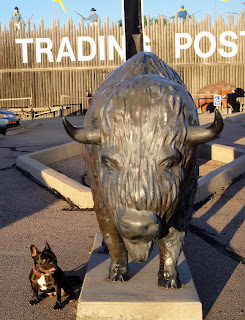 Thankfully we soon left the flatness of Nebraska.  The scenery started to get a lot more interesting as we crossed into Wyoming, the majestic Rocky Mountains rising out of the West. 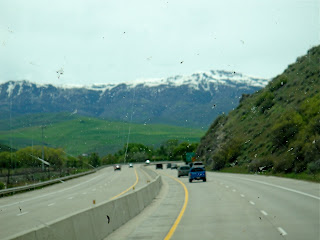 Once we got into the Rockies, it really got more interesting, as you can see here (through bugs on the windshield). 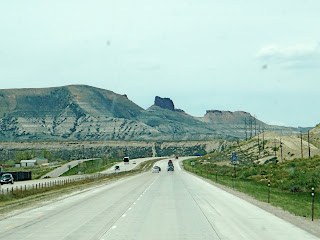 Well, actually...  This is more of what my view was like most of the time: 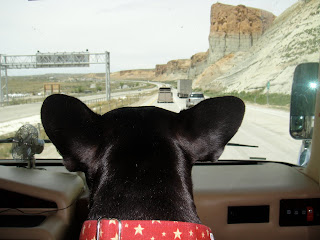 After another few hours, we finally reached Utah, almost 2000 miles from home.  We made it to Ogden (near Salt Lake City) in just under 48 hours - pretty impressive!  Speaking of impressive, so was the view from our site in the back yard of the cousin who hosted us there: 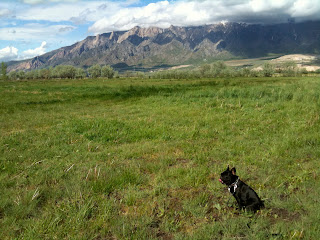 We had a little reunion with a bunch of Paul's extended family, as well as his parents (who had flown out to Utah from Ohio a few days earlier).  It was nice to spend a few days with them, relaxing on their farm after all those hours on the road. 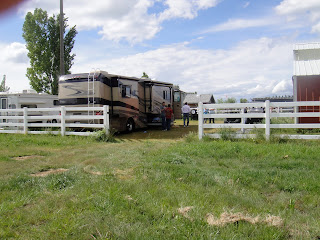 There was even a power hook-up for Big Earl (they own a boat as well as the camper you can see in that photo - B.E. totally dwarfs it though), so it was the perfect spot to park him.  Brutus and Mason were happy to have some room to roam after being confined to the coach for the last few days.  Being the inquisitive guy he is, Brutus wanted to check out the cool "toys" you get to have when you live on a farm. 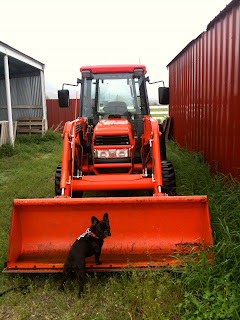 The tractor was neat, but not nearly as fun to ride around in as their sporty Polaris! 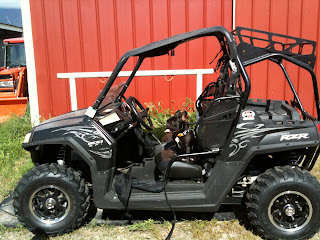 So of course we all went for a ride around the pastures (he's hard to see in the photo, but Brutus was strapped in safely on my lap)!  This was A LOT easier to maneuver than Big Earl! 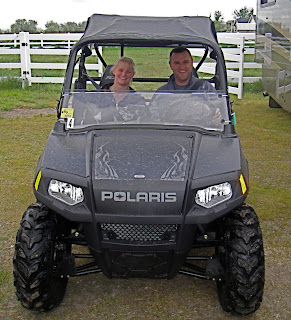 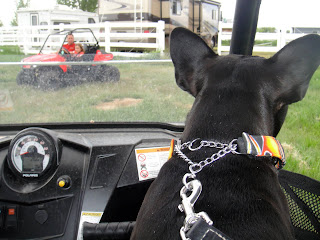 After a few days hanging with the whole family in Utah, we will be heading out to the Tetons & Yellowstone with my in-laws on board for the next leg of our trip. We've traveled together before, so already have our alternate seats figured out (I get bumped from the navigator position to the couch where Brutus is, Mason gets bumped from the couch to the floor). 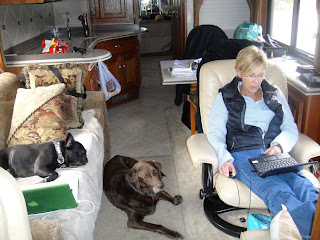 So tune in next week to see what we find in Montana, Idaho & Wyoming!  Signing off for now from Ogden, UT -
Michelle & Traveling Brutus
Posted by BRUTUS at 12:24 PM

When we travel with 'Uncle Charlie' (Dad's co-driver, business partner, etc., etc.,) Mom gets stuck on the couch. Unless Dad is sleeping and then she's in the passenger seat listening to Uncle Charlie's stories (and he's got a story for pretty much every freeway exit on every road in the Western 11 states!). He says it helps keep him 'alert'. Mom says something else, but I don't think I'm allowed to repeat it! Happy travels (and be thankful you aren't in one of those wagons - no internet access!

We can't wait to see pictures of you narrowly escaping being eaten by bears in Yellowstone! ;-)

PeeEss: I guess we put in our pizza order too late, huh? Maybe next time...

PeeS. Depending on how high you go you may still get to see snow! Lovely weather we are having out west here.

Happy trails to you, Brutus and Mason!

What an incredible trip!! The mountains are just fantastic and Brutus seems to be having a good time (except maybe for meeting that bison). Yellowstone and the Tetons will be awesome - I'm jealous! I'd love to go back!

Hey B. & M. (no Poopy PUN intended) you guys are sure having a grrrreat adventure. Guess What??? my 4-wheeler (that used to be my mom's, butt is MINE now) is a Polaris tooo. Sooooo I know how much fun you had on That thingy. Mine is Just like that... only totally different.
Did you get to roll in any grrreat stuff on the farm??????

Oh, I feel all kinds of the envys watching your big adventure. Sure does look fun! Mom says we might get one of those traveling houses one day but it prolly won't be as big as yours.

I don't know if we told you but Flat Brutus arrived all safe and sound! We have a big, full weekend planned for him and will prolly keep him for the week since we have lotsa fun things to do this week, if that's okay.

Hey how comes Mason gots to go to the fwoor? No fair man!!!

We are currently putting together a gov'ment petition for betterer sleeping arrangements outsides, perhaps we can add Big Earl ridin arrangements for you Mason?

hihi miss michelle and brutus!
wow, it sure is pretty in that ogden, utah place! i've never seen mountains up close like that before. south carolina is pretty flat. oh, and the booker man is totally intrigued by the fun farm toys!! me and asa and mama can't wait to hear about the next leg part of your adventure in big earl!
*woof*
the booker man

That Polaris sure looks like lots of fun - almost as much fun as riding aboard Big Earl!
We just came from Niamh and Ambrose's blog. It seems flat Brutus had a most unfortunate accident. Oops!

oh Brutus,
you're having so much fun; remember to keep safe.

So much fun - that bison shotis a hoot - love the expression and the tongue on Brutus. It sure sounds like things are going well and you are all enjoying yourselves.

It is so nice to see you guys having so much fun on your adventure!! Can't wait to hear more!!

That Polaris needs a pair of frenchie ears! It is kinda Brutus shaped without the ears! Looks like Real Brutus is seeing as much adventure as flat Brutus these days!
I hear that Flat Brutus suffered fatal trauma at Nimah's place so I guess it will be awhile before we get a visit :-(
Hope you are having fun!

I just found your bloggie through Mayzies blog, when Flat Brutus arrived!

What fun! I just LOVE Flat Brutus, and now I can follow Real Brutus adventures too!

Brutus, you get to have so much fun! I wonder if your real self might run into your flat self on this great adventure?

You are having way to much fun Brutus. We ARE jealous!
Benny & Lily

I see you enjoyed a little of the "Good Life" here in FLAT Nebraska. Maybe FB would like our state more. BOL

Those other states might have purdier scenery but we have the better football team. Which if you haven't heard, has moved to the Big Ten. So you better start praying for when your Buckeyes meet the Huskers! :)

sounds to me like you guys are covering a lot of ground! Almost as much as flat brutus!

What a great road trip you must be having! Thanks for letting us see the sights along with you!

The only place I like to see bison is in my bowl!! Looks like lots of fun on the farm, I think I need one of those go-cart contraptions.

My mom person says she has almost the exact same view when we travel, whatever that means!