We have officially passed the halfway mark on our Wild West Earlventure.  Internet access is hit and miss at best, so today's post is a potpourri of things we've seen in the past few days. 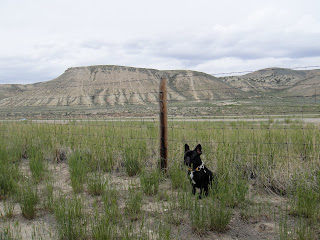 Is it just me, or do you hear "The Good, The Bad, and The Ugly" playing in the background??
We spent an night in Cody, WY - a true western town.  Like any good bunch of cheesy tourists, we took in a rodeo!  Being a suburban dog, Brutus was really interested in what all those new smells were, but this is as close as he could get. 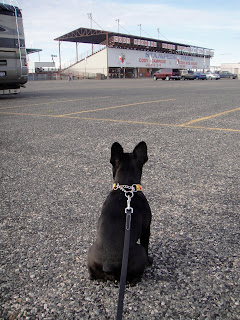 I, on the other hand, got to embrace all that is Western.  As soon as I saw this bull I HAD to sit on it!  And yes, I now own a cowboy hat. 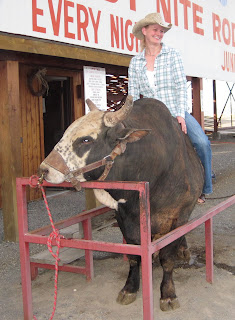 I tried to cheer up Brutus by letting him wear my hat afterward, but he didn't seem to appreciate the gesture... 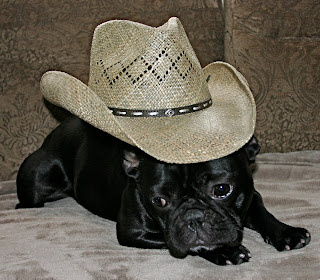 Seriously, mom - this does nothing for my image...


Where there are cowboys, you can bet there are Indians - and  apparently some had stayed at our campground!  The boys had fun checking out the tepees nearby 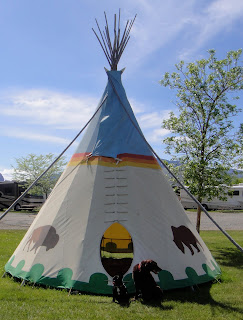 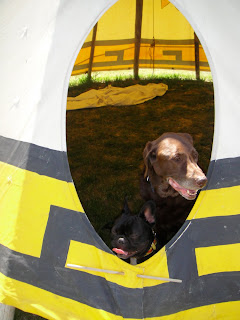 Gosh Mason, can you believe people lived in these things? 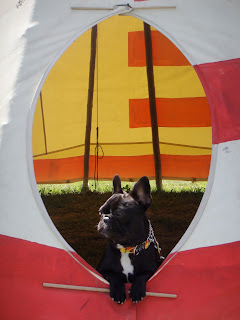 No couch or A/C?? Wow talk about primitive....
We made a few other stops after Cody, some of which were more pet-friendly than others.  Upon seeing me out in the parking lot taking this photo of Brutus, the Harley Davidson employees in Sturgiss, SD invited us to come in and check out the store. 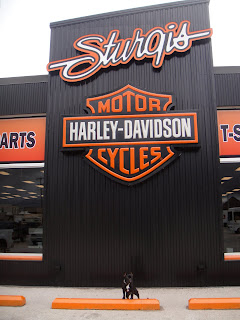 So Brutus got to come in & see some bikes.  Too bad he hadn't packed his flame collar - we just had to make do with skulls and crossbones. 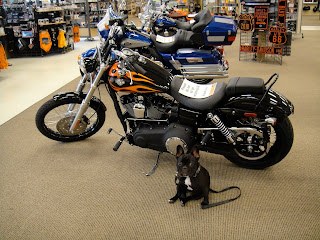 Does this model come with a sidecar??
We were also able to get a photo op at nearby Crazy Horse monument.  They've been working on this thing since 1948, you'd think it would be further along (it's privately owned, and I guess funding is an issue)!  If you biggify the photo you can see the face of Crazy Horse up at the top of the mountain in the background.  Look closely at the sign too, it's kinda ironic that it's right behind Brutus. 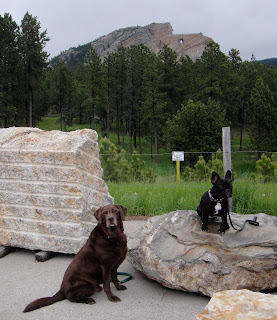 When we stopped to see Mt. Rushmore, it was disappointing to find that dogs weren't allowed - period.  They had to stay in Big Earl.  Considering how crummy the weather was (45 and a steady rain), I doubt they minded.  You'll have to settle for just seeing me & Paul in this classic shot. 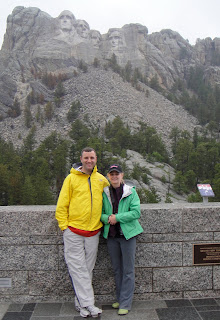 We've gotten good use of our raincoats on this trip, as there has been some kind of precipitation every day.  Even Brutus had to break out his slicker a few times because it was pouring so hard. 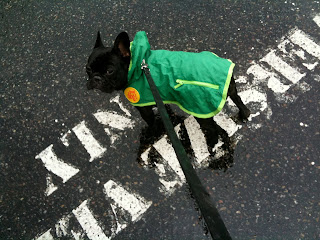 What are you looking at?
Yes, my raincoat matches mom's.  Sheesh.
That being said, at least it makes it easier to leave the boys behind in the coach, since they'd rather be on the inside looking out during this kind of weather! 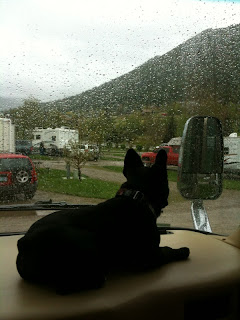 Hey, at least I have a room with a view!
So just a few more days on the road.  Despite the rain we've had a grand adventure, and we'll all be sad when it's over.  Hope you've enjoyed being along for the ride, and will indulge me in another post or two before our Wild West Earlventure draws to a close!
Posted by BRUTUS at 11:02 PM

You've sure seen a lot of stuff! Mom remembers going to the Crazy Horse Monument. It's a shame that they have taken so long to get so much of it done. It's really a labor of love for that family!

wooow you had a super duper aventure :D like you flat brutus :)
love the hat!!!

Good to see the little pups enjoying themselves with you on your big adventure.

You look like you are having a great time!

You look pretty good next to that Harley too. Both our mom & dad ride - we have been trying to convince them to get a sidecar, but no luck just yet.

All those cool things to see has to mean you you are taking a different way home. I don't blame you for wanting to see something besides the flatlands. BOL

Watch out for those injuns!

Oh, I have luuuuuuuved your Earlventure and can't wait to hear some more abouts it! I think your mom looks cute in her cowboy hat but, well, I think it looks better on her than you. Sorry. Did you pee in the teepee? That's what it's for, right?

Hey, we kind of like you in that cowboy hat, Brutus - you are a real dude. And we think we want one of those tepees in our yard, it might help keep us cool from the miserably hot sun we are having. And yes, we got lots of that rain too, almost some every day here too.

We have truly enjoyed riding along with you on your big adventure. Where are we going next?

what a fantastic trip!! you have seen some great sights. my daughter used to live in graybull, wy, about 60 miles from cody. she worked in the cody wal-mart. l liked cody, it was a nice town. graybull...meh.

and i would have been tempted to take the blasting zone sign home with me!
hugs,
puglette
:o)

WOW...Such fun you are having Brutus...We don't want it to end either!!!

Thanks so much for taking us along!!

More pawesome adventures... and this time with a Rodeo included!
Have fun!
Kisses and hugs
Lorenza

Now that you are far, far away from us, our weather has warmed up, dried out, and is perfect summer weather. No rain coats for us... Heehee! Dude, it looks like your parents are having a grand time driving around the country while you sit in Big Earl and (probably) chew on Mason's ears. I would demand more treats, just on principle!

We hope you got to take that Harley out of the showroom and for a serious ride, Brutus!

You look good in a cowboy hat! And, wow, progress sure is slow on the Crazy Horse monument. At this rate they'll never get to Neil Young.