You are Getting Very Sleeeeeepy

It's the long haul home.  We're making our way across South Dakota (man, its a WIDE state!), Minnesota, Wisconsin, Illinois, Indiana, and finally the western half of Ohio.  Lots of hours (about 20) to log on the road between here and home, so we're burning them up as fast as we can.  We've got a few drivers on board (Paul and his dad), so no real reason to stop for anything other than gas.  Riding as a passenger has always made me sleepy, and apparently it has the same effect on the dogs. 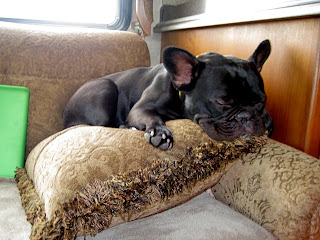 Both Brutus and Mason have been great little travelers on this trip.  They adapted to the new routine (or should I say lack of routine) without getting too discombobulated, and basically slept any time we are on the road.   As you can see, the remainder of the trip will be accompanied by lots of snoring! 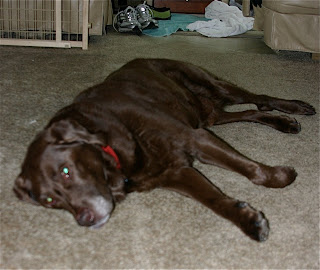 They find the most interesting places & positions to sleep in!  The laptop was where Brutus wanted to lay (my lap), so instead of finding another spot, he just laid on top of it. 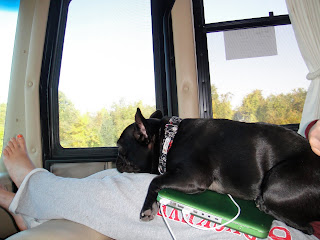 Can you even see Mason amidst the pillows and bags? 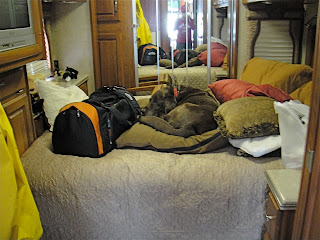 Brutus thought he had found a way to keep my from taking photos of him while he slept (he's laying on the camera).  Good thing I brought along a back-up! 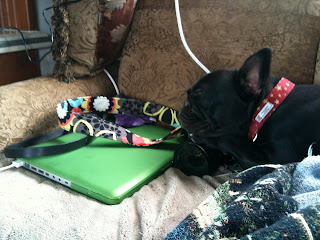 Brutus is a very relaxed sleeper.  He gets all floppy, like someone took all the stuffing out of him!  This is my view of him napping on my lap, legs dangling down on either side. 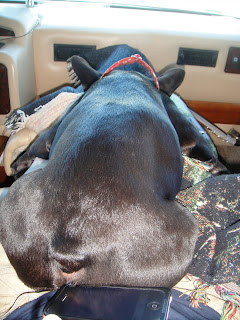 Not all the positions they choose look so comfortable.   Here Brutus is pretty much standing while he sleeps, head propped up on the back of the sofa. And how can he breathe with his nose pressed up against the wall like this?  Maybe through his ears? 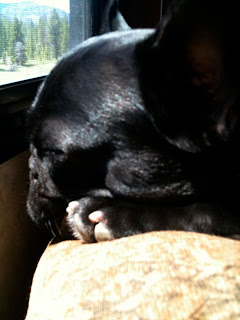 Um, Mason - I don't think that's the best way to use that chair.  He really is asleep in this awkward position. 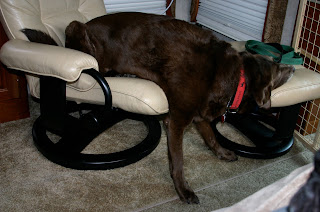 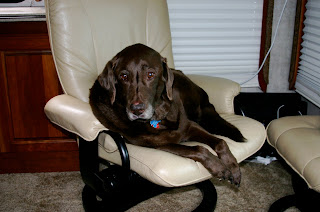 Of course if Mason lays in the chair, Brutus needs to test it out too.  He fits in a little easier. 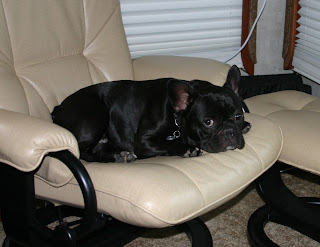 Sometimes everyone wants to lay in the same place - the more the merrier, I guess! 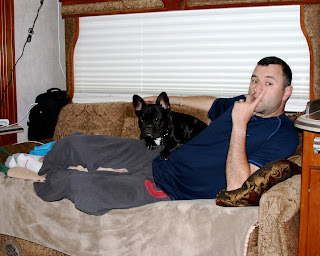 But with three on the couch, it gets a little tight! 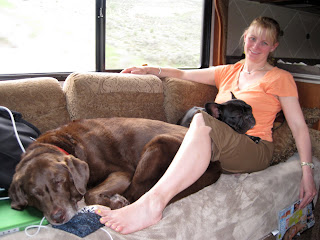 Anyways, we hope to be home by sometime tomorrow afternoon.  Just a few more fun photos to share and the Earlventure will be over by the end of the week.  Once we get home it's a day of work to get Big Earl unpacked & cleaned up so he can rest for a few weeks.  Until then it's back to everyday life, although I'll refrain from calling it "normal" (nothing around here is normal).
Lots of other things to catch up on once we return, from Flat Brutus to surprises I've been hinting at for what must seem like forever.  Hey, you've waited this long, what's a few more days? Besides, if you are tired of waiting, take a tip from Brutus: 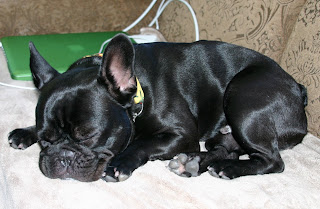 The picture of Mason in the chair and on the footstool (sort of) has got to be the funniest thing I have seen in a Squirrel's age!!!!

We love seeing how the pups sleep on your earlventure!!

I especially love the one of Mason sleeping in the chair with his head on the leg rest adn Brutus smashed up so it looks like he can't breath!

Hope you a safe ride home!

That brings a whole new meaning to "let sleeping dogs lie" for us! We'll wave at you as you drive through Illinois!

You are torture experts with your surprise secrets. We expect full disclosure in a couple of days! Brutus' pepper collar is very stylish. Bet Stella is digging that.
Sighs (Kitty), and Snorts (Coco)

I love the picture of Mason half falling off the chair and sleeping!!!

You two are quite the good travelers. We love your fun sleeping positions. BOL

I love monorail Brutus!! And Mason really really needs to find a different way to sleep in that chair! Otherwise you'll have to get a doggie chiropractor! Safe travels home (and wave when you're going through Illinois!!).

Still hinting??? Can't you at least give us some clues? BOL!

Love all those sleeping positions, especially the very relaxed Brutus on your lap. Safe travels the rest of the way.

You are sooooo right about napping Brutus! Enjoy your ride home!!

YAAAWWWWNNN! I gots sleepy just looking at those pictures. I must say that you both are Most Excellent at unconventional sleeping positions. You would totally take the gold in the Sleeping Olympics!

Sleeping does make the time pass quickly. If only I could sleep at work!

Adorable pictures Brutus especially of that butt..BOL..Those states out there start blending into one another. You will be home soon. Hope you are being the backseat driver. Nitey nite
Benny & Lily

Hello Brutus and family! We also wonder how Betty can sleep with her nose buried in the blankets and pillow. Maybe the Frenchies can breath through their ears...BOL! I have a surprise for you too Brutus! Momma has been so busy with these fosters and Gunther's birthday she hasn't had a chance to post it yet.

brutus and mason are napping pros!! i bet mason got pins 'n needles in his leggies after snoozin' with his hiney on the chair and his front side hanging off like that! heehee.
are you gonna do a post about cleaning big earl? inquiring minds want to know! ;)
*woof*
the booker man

BWHAHAHAHA!!!! Great sleepy travely pictures! The Little Monster hasn't been on a Really Long Trip (like the annual foray to Nebraska/Kansas for the National car races), so I don't know how she'll be on long trips but me? I like sleeping between the driver and passenger seat (when I'm not sitting in Mom's lap - which is a little tougher for me than for you, Brutus!). That way, I can listen to all the gossip between driver and passenger. But Mason has a good idea about the sleeping on the back bed. I must give that a shot!

Those are some crazy sleeping positions! I agree with Brutus, naps always help in any situation.

We can't wait to hear the surprise!