I got an idea from my friend/Carmen's breeder to use a playpen for containing a puppy.  Carmen was already used to it, as her quickly-growing litter of 6 Frenchies had lived in one for the last few weeks before they went to their forever homes.  This way if I can't keep an eye on her every second (which is what it takes to keep Carmen out of trouble), then the pen gives her a lot more room and ability to be active than she could in her crate.  She can play independently while I'm home, then just go in her crate when I need to leave.  It's worked so well that we even gave her little habitat a name: Camentopia! 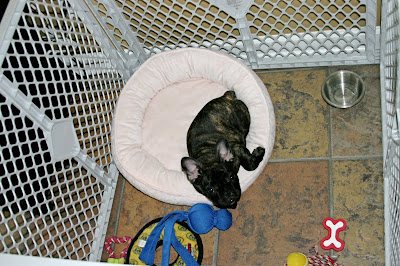 It has everything a puppy could need at a moments' notice:  a comfy bed, piddle pad, water, lots of toys.  The photo above was taken when Carmen was about 15 weeks old, still a little squirt, and happy as a clam in Carmentopia.
Here's a broader view, her pen parked in the corner of my family room.  Brutus can't resist the chance to torment Carmen by doing walk-bys (often with a toy in his mouth to intensify the taunting) to remind her that he's free and she's not! 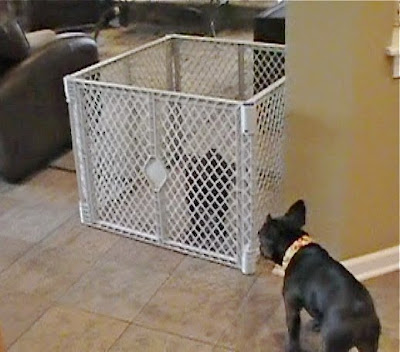 Well, as you know, things change.  At almost 5 months old, Carmen is growing up fast (already up to almost 14 lbs from the 9 lbs she came home weighing) and she's one smart cookie.  My little Frenchie princess decided it was time to explore broader horizons, and no plastic kiddie pen was going to hold her back! 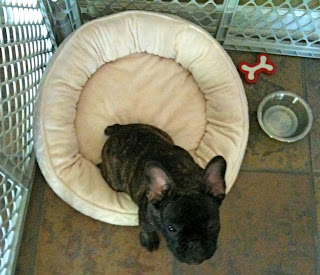 I thought Carmen might eventually learn to jump out of her pen, but I was wrong.  One day I returned to the room to investigate a strange rumbling sound, and found Carmen on the other side of the room - still IN Carmentopia! The sound was her pushing it across the floor! 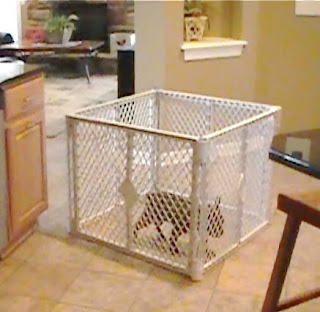 If you have the capability to watch video, I promise you'll get a kick out of this clip below.  Only a video can do justice to how well Carmen has learned how to maneuver her enclosure!
As you can see, Carmentopia became a mobile home!  I can't believe she's strong enough to push that thing around, but all she does is lower her head and lean against it while she walks.  If her strength isn't impressive enough, the way she has learned to steer it certainly is!  You can see how Carmen even learned to make little adjustments sideways or back it up (by pushing on the different sides) in order to avoid things in her way - namely my kitchen cabinetry - and get it through tight spaces.  If it weren't for the gate in my kitchen door, who knows how far she would have roamed! 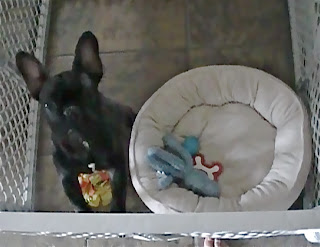 So Carmentopia was great while it lasted, but it's time to move on.  I relocated Carmen into a new, bigger crate (which I really pimped out, since it had to be luxurious enough for the Frenchie princess!), so that she can lounge comfortably when not under my watchful eye (hmm, good idea for a future post, Doggie Cribs!).  I finally bought a real ex-pen, so that Camen & Brutus can hang out together and still be safely contained!  Brutus isn't terribly fond of this solution, but tolerates it better than a crate.
Speaking of tolerating, I'm getting the evil eye from my shiny black boy.  Better wrap this up, but before I do an obligatory Brutus photo (lest there be a post without one!).  He wanted to make sure I showed you what he really thinks of sharing his blog with Carmen: 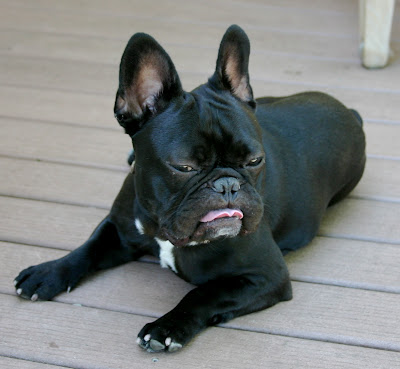 Ooooh you're going to have to watch that little one. She's too smart for her own good.

Hysterical!!! A reminder not to get in the way of a determined female!!We also have the crate vs. on the loose to cause all sortso f mayhem dilemmna. I am trying two free standing gates to contain them in the kitchen. We'll see......

Too Funny!! You are going to have your hands full with that one - she is very smart :)

Ha, that is so funny! Good thing you have tiled floors. Never underestimate the power and brains of a girl:)

Isn't it amazing how fast they learn the things you wish they wouldn't?

Smarty pants! What a little stinker -very cut though and you have to admire that ability to steer around objects - WOW!

Oh that was way to cute and funny. Carmen sure is one smart girl!! Guess she belives in the saying~~Where there is a will, there is a way, BOL

oh my goodness!! that is just too cute and so funny. what a clever girl. it is so fun to watch her think about where to go and how to get there. i guess she's being bull headed! you have smart doggies! and you home is lovely!!
hugs,
puglette
:o)

she is a super smart pup!

mom almost pee'd her pants. That is hysterical. Good job little girl..Agility is in your future
Benny & Lily

I think Carmen has been working out or maybe even taking roids or something because she is like a total moose! Yoiks! Brutus! Watch out!

Ha ha ha! I swear, I heard a tiny Frenchie voice shout "Ramming speed" as that contraption took off! I am afraid that you are in trouble. Not only is Carmen obviously too smart for her own good, but probably everyone else's, too! You're going to be on your toes with that one!

Oh-oh!
Carmen is soooo smart!
Sure you are going to have interesting times watching her growing!
Kisses and hugs
Lorenza

OMD! We think Carmen is one smart pup. No way is Brutus going to walk by without her following!

miss carmen is one smart cookie! i bet if you gave her a couple more days she'd totally figure out how to shove on up to the fridge and open it for a snackie. teehee!
*woof*
the booker man

Woof! Woof! You are such a funny smart pup. LOVE your last photo. Lots of Golden Woofs, Sugar

Way to go Carman! THat is most impressive work and you are really using your head (pun intended). Can't wait to see your crib!

You are one smart and creative girl, Carmen! You're going to keep your mom on her toes!

HAHAHAHAH!!!! Carmen's House Without Wheels!!!! Clever (and strong) little beast!!! I'd sleep with one open, if I were you, Brutus!

PeeEss: Mom got your Mom's email, but has been slacking in responding. She's been "busy" (uh-huh...whatever...).

Don't hold back, Brutus, show us how you really feel ...

LOL wow, she's smart to move it around like that! I'd have to place objects around it to keep it in place. Funny that brutus shows off his toys while she's in there. My boston terrier does the same exact thing to her little brother when he's confined. She puts the toys right up against the gate, rubs it around it and then runs off. lol

Brutus is gonna have to be a good big brother and learn to share!

What a smarty! I have an xpen that I'm pretty sure she can't move. Plus, I think I was 19 lbs when I was 8 weeks old.